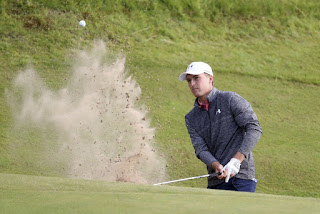 It's been no secret over the past 2+ years that Jordan Spieth was an emerging star on the PGA tour.  It's starting to look more like emerging legend.  The 23 year-old Texan secured his third major; only the all time legend Jack Nicklaus completed three sooner.  Although he led for most of the weekend, it was how he finished the back nine that cemented his legacy.  After a shaky 13th hole in which he took a 1-stroke penalty on an awful tee shot but still made bogey, he coughed up the lead to playing partner and fellow American Matt Kuchar.  From there it was lights out.  14 - 17, he went birdie, eagle, birdie, birdie knocking down putts of 4', 50', 30', and 7'.  He had an easy par on 18 with his three shot victory secure.  Just two weeks until the PGA Championship, a tournament in which Spieth will be a heavy favorite.  He is the Longhorndave Sportsman of the Week.
Posted by longhorndave at 8:37 PM No comments: 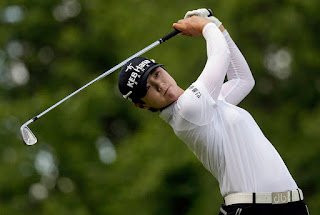 For the second time in three weeks, we have a first time major winner on the LPGA tour.  This time, Sung Hyun Park of South Korea stormed the American shores to win her first LPGA tournament and Major.  It was her 5th Top 4 finish in 14 tournaments, so the 23 year-old top player on the Korean LPGA is definitely a world contender.  Consistency was her model, as she held off a surprising 17-year old amateur Hye-Jin Choi also from South Korea and Feng Shanshan of China with but just one bogey on the final round.  In a surprise Asian showing, South Koreans controlled 8 of the top 10 positions at Trump National Golf Course, with the top finishing American being Marina Alex at T11.  Is this a harbinger of things to come or a weekend anomaly?  Time will tell, but Sung Hyun Park is our Sportswoman of the Week!
Posted by longhorndave at 6:26 PM No comments:

Mookie Would Have Beat It

1986 World Series Game Six between the Boston Red Sox and New York Mets remains one of the most memorable World Series games in the last 50 years.  In the visitors dugout, you had the snake bitten Red Sox, who had not won the World Series since trading Babe Ruth in 1918.  In the other, you had the hard charging Mets, who also had been over 15 years since winning a title.  Both teams had survived thrilling League Championship Series against teams from the West and felt like they were the team of destiny.  Not to mention, it was New York vs. Boston, one of the biggest city rivalries in all of sports.  The Mets were facing elimination and had trailed the entire game (except for a couple of ties).  The Sox were just three outs, then one out away, when one of the most unpredictable sequences in sports happened.  The Mets wouldn't die.  After 2 outs in the bottom of the tenth, trailing 5-3, they plated three runs with the help of bloop singles, wild pitches, and an improbably slow grounder to first.  Here we dissect the famous Buckner boner.  Mookie Wilson at the plate...

"Little roller up along first...behind the bag...it gets through Buckner, here comes Knight and the Mets win it..." - Vin Scully.

First, let's clear up some misconceptions of the situation.  The Red Sox did not have the lead at the time.  After three bloops singles and a wild pitch, the Red Sox had already given up the lead and it was tied at 5.  Most people (including myself) mis-remember that play that if Bill Buckner fields and hits the bag, it's over and the Sox are World Champions.  Not so.  They would have had to blow more bullpen and maybe come out on top.  Conventional wisdom was, the Mets were a team of destiny.  But I digress.

It does remain one of the greatest games in World Series history.  Roger Clemens started it; Calvin Shiraldi blew the save but almost went three innings for the win.  The Mets came back from 2-0, 3-2, and 5-3; the last rally with two outs and nobody on.

To quote the famous ESPN 30 for 30 commercials.  "What if I told you...", even if Bill Buckner fields the ground ball, Mookie would have beat it.  It may not have been close.

Before we roll tape; some facts.  Buckner was a fielding liability (at this stage of his career) with very limited range and mobility, including bad knees, and a hurt Achilles tendon and ankle.  And Mookie Wilson was quick.  On the play in question, his swing was taking him to first as Buckner awkwardly ambled to his left caught in between hops and unsure of his play.  Mookie was running for his, and his team's, life (but not really, remember, the game was tied).  And a third factor we won't even get into.  Bob Stanley balked, never game to a stop, should have moved Ray Knight to third.  Now.  Roll tape.

On paper it was a chopper to first and routine.  But all the factors above are in play.  It was slow.  Mookie was fast.  Buckner was the opposite of agile.  We start to look at timing.  We start with when the ball scooted through his legs in this video it was after the 00:22s mark

But just to the 23s mark as quickly as I could stop it, see how little the ball has traveled.


Mookie hits the bag at 24s on the clock


The quickest I could stop the video at 25s was here

Now could Buckner cover 10 feet in say 1.6 seconds?  From a crouched position on those 36 year old knees and a hurt ankle/Achilles tendon?  This debate we will never know.  For 10 feet, it would be 3 to 4 steps from a stand still, crouch (each in 0.4s or so).  Looking at Mookie's stride cadence, I peg him at about six steps at full stride in that same time period (one step every 0.25s full speed).  If I were at the betting booth, Mookie beats it, by a half a step to a step.  After the ball passes Buckner, it was slightly slowed down but still moving well.  It goes about 12 feet in that time period (see Figure 3).  Would Buckner have been able to move the other direction in approximately the same time period?  I believe a contributing factor to the misplay was that Buckner knew he was on razor thin time.  He had to snatch as he was moving toward the bag or had no shot.  It still might not have been enough.

Watch it all at full speed.  How quickly Mookie flashes at the bottom as the ball moves away.  Thinking, could Buckner move as fast as that ball?  I think not.  Mookie would have beat it.

When asked, even Mookie thinks so.


However, had Buckner just stopped the ball, Knight stops at 3rd and we play on.  Maybe the Red Sox win in extra innings.  But I have a bone to pick with the official scorer.  That was a hit AND an E3 allowing Knight to score (unearned run, no RBI just the same).

Posted by longhorndave at 10:27 PM No comments: 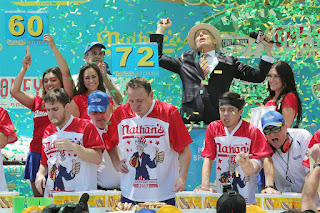 The definition of sport is "an activity involving physical exertion and skill in which an individual or team competes against another or others for entertainment."  An American tradition on the Fourth of July as old as time (or at least 1972) is the Coney Island Hot Dog eating contest.  Which is a very physical contest, requiring specific training and skill, sanctioned by the Major League of Eating (MLE), individuals are competing against one another and it must be entertaining because thousands of people show up to watch, and millions watch on TV at home.  And the American hero Joey "Jaws" Chestnut did something never done before in 2017.  At 72 hot dogs in the 10 minutes time, busting his old record of 70.  It was his 10th title in 11 years; he came on the seen to save the United States from Takeru "The Prince"/"The Tsunami" Kobayashi, the Japanese eating phenom who had won six in a row prior to Chestnut's streak.  Sports heroes come in all sizes and with all training background.  But Joey Chestnut is a deserving Sportsman of the Week!
Posted by longhorndave at 6:23 AM No comments: 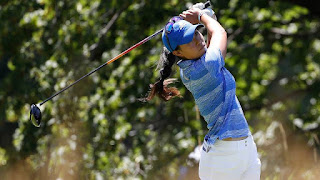 Summer is always to be the season for grand slam individual tour events across individual sports, and the LPGA takes center stage.  One of the most popular lady golfers not only one her first tournament, but made it count in a major.  The San Francisco born Danielle Kang put together a magnificent four rounds of at least 2 under par to edge charging defending champion Canadian Brooke Henderson.  She sealed the title with a 2-putt birdie on the Par 5 18th at Olympia Fields Country Club in Illinois.  Kang was a two-time U.S. Amateur champ (2010, 2011), many fans were anxiously awaiting her break through professional performance and they got what they wanted to see.  Will Kang be the next great American female golfer?  Time will tell, but she is the Longhorndave Sportswoman of the Week!
Posted by longhorndave at 5:29 PM No comments: