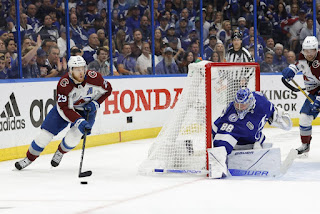 What a week for hockey with exciting Stanley Cup Finals games resulting in a new Champion winning it for the franchise since 2001.  The Colorado Avalanche followed up their second straight Western Conference top seed with a (pardon the overuse) Avalanche through the playoffs.  They finished the grueling postseason at 16-4, with two sweeps and two 6 game series wins, never facing elimination or even losing two in a row.  The Finals they were led by their first line center, Nathan MacKinnon in a thrilling victory against the two-time defending champion Tampa Bay Lightning.  The former number one overall draft pick finished the week with 2 goals and 2 assists, but both his goals came in one goal wins, when it counted.  MacKinnon logged over 22 minutes per game all four, with the steady hand to lead his team to raising the Cup.  Congratulations to our Longhorndave Sportsman of the Week!
Posted by longhorndave at 9:23 PM No comments: 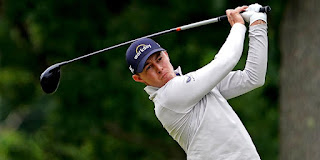 A thrilling weekend of golf culminated with a surprise United States Open champion fending off both veterans and younger players alike.  27-year-old Matt Fitzpatrick dazzled on Sunday, outlasting several strong contenders like John Rahm and Scott Scheffler.  But it was Will Zalatoris who's hunger for his first major proved the last opponent standing.  Fitzpatrick played near flawless golf, hitting every green and ensuring success with a great shot on 18.  Zalatoris had a long-shot birdie putt that missed by an inch and Fitzpatrick won his first tournament in the Americas, and his first major.  Consistency was the Englishman's calling card all weekend, with a 68-70-68-68 to finish 6-under par.  An effort more than worthy of Sportsman of the Week!
Posted by longhorndave at 12:03 PM No comments: 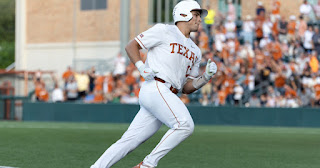 What a weekend of college baseball action culminating in the College World Series field of eight worthy teams.  National seeds went by the wayside Super Regional after Super Regional as only two (Stanford and Texas A&M) made it through to Omaha.  One of the teams that spoiled the national seed party was the Texas Longhorns, who spoiled East Carolina's attempt at their first College World Series bid with a thrilling three game series win.  Led by the most prodigious home run hitter in the BBCOR (bat-ball coefficient restitution) era of college baseball history, Ivan Melendez.  The "Hispanic Titanic" hit his 31st and 32nd home runs of the season (in 65 games) passing legends like Kris Bryant and even pre BBCOR Mark McGwire.  The Longhorns started the season ranked Number 1 and got into brutal Big 12 conference play but emerged no worst for the wear and back in Omaha for the 38th appearance, the most all time.  Melendez is the Longhorndave Sportsman of the Week!
Posted by longhorndave at 8:42 PM No comments: 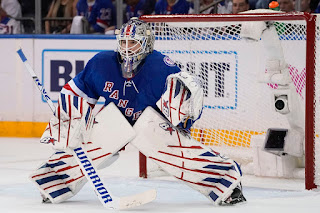 The Stanley Cup Playoffs continue to march toward a champion, and the New York Rangers are a team that few expected to make a strong run yet are positioned to make their first Stanley Cup Finals since 2014.  And their strong point has been goaltending.  By Igor Shesterkin.  The Russian wall has kept opponents at bay, winning 3 games out of 4 this week.  It started with a clutch 6-2 victory in the Eastern Conference Semifinals Game 7 against the Carolina Hurricanes on the road in Raleigh, NC, where the Rangers had not won all series and were huge underdogs.  Then, starting Games 1 and 2 at home at Madison Square Garden, he held the two-time defending Cup champion Tampa Bay Lightning to 2 goals in each game for clutch 6-2/3-2 victories in both.  Three wins on the week and a smooth 2 GAA with a save percentage over 94.5%.  Will the Rangers win their first Cup in over 25 years?  If so, it will be Shesterkin that will be the cornerstone, our Sportsman of the Week!
Posted by longhorndave at 9:37 PM No comments: