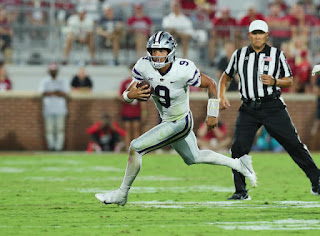 It's starting to get to the interesting part of the College Football season, with conference openers and no longer cupcake out of conference paydays.  One of the biggest upsets of the first week was orchestrated by a team that, quite frankly, got beat by a cupcake the week before.  The Kansas State Wildcats surprisingly fell to the Tulane (Mighty) Green Wave 17-10 last week in a stunner.  Many thought their conference title hopes would be abandoned.  Au Contrare.  Led by 5th year senior Nebraska transfer Adrian Martinez, the Wildcats beat the 6th ranked and Big 12 favorite Oklahoma Sooners 41-34.  Martinez accounted for five touchdowns, including four on the ground, with an efficient 21-34 passing and one TD, but gashing the defense with 148 yards rushing on 21 carries.  It's not like the Sooners could gang up on him, with weapon super back Deuce Vaughn also getting as many touches and more than 100 yards.  The Sooners had no answers for Martinez, who cemented the Wildcats fourth win in five years over the Sooners.  A deserving Longhorndave Sportsman of the Week!
Posted by longhorndave at 8:22 PM No comments: 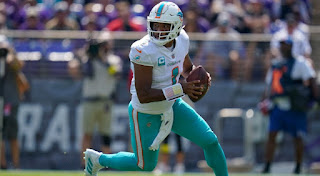 One of the surprise teams in the 2022 NFL season so far is the Miami Dolphins.  They may have turned the corner with their franchise QB and former 1st round (5th overall) pick Tua Tagovailoa.  Having built some offensive weapons around him Tagovailoa suddenly is filling the superstar shoes he aspired to fill.  This week in what may be a key AFC matchup against North Division favorite Baltimore Ravens, he outdueled former NFL MVP Lamar Jackson.  Tagovailoa hit 36 of 50 passes for an eyebrow raising 469 yards and 6 TDs (both career highs, his first more than 375 / 6).  He had 3 TDs in the 4th quarter, fueling a 14-point 4th quarter (21-point overall) comeback and scoring with 14s left.  Winner.  And Sportsman of the Week!
Posted by longhorndave at 9:36 PM No comments: 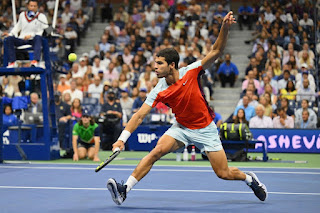 An amazing Fortnight in Queens ended with an epic semifinals and finals in the United States (Tennis) Open.  On the men's side, it was a rare victory outside of the (arguably) best three players ever (at least measured by Grand Slam wins).  But this time, it was a Spanish 19-year-old who has taken the tennis tour by storm.  And is now World ranked number one.  Carlos Alcaraz appears to be all of the next generation tennis player to battle for years, if not decades to come.  In Flushing, he finished off seven straight wins with epic battles.  The Finals victory over Norwegian Casper Ruud went 4 sets (one set on a tiebreak).  The epic Semifinals against upstart home favorite American Frances Tiafoe went a full 5 sets, two by tiebreak (both Alcaraz sets dropped).  It was Alcaraz 5th singles tournament win, first Grand Slam, and he's now 51-9 for the year.  First of potentially many Longhorndave Sportsman of the Week!
Posted by longhorndave at 9:21 PM No comments: 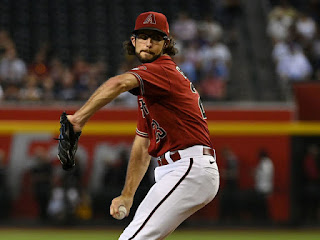 The Arizona Diamondbacks are on a rebuild and not making much headlines in the top-heavy National League West Division, but one player is making record breaking performances.  Zac Gallen is on an absolute tear with his right arm.  He is now up to six straight starts without allowing a run (let alone an earned run).  Since his last runs allowed August 2, he's now gone 41 1/3 innings with just 16 hits (and 8 walks).  He's gone from 6-2 to 11-2 and shaved nearly a point off of his pretty good ERA down to 2.42.  His six starts without a run ties a record, he does have a little work to do to catch Orel Hershiser's 59 consecutive scoreless innings.  The D-backs aren't that bad of a team, just 5 games under .500 and in third place behind the much more experienced and highly compensated Dodgers and Padres.  For this week, Gallen notched 14 innings, 4 hits, 1 walk, and 14 K's in wins over the contending Brewers and Phillies.  A story to watch during September, Gallen is a worthy Longhorndave Sportsman of the Week!
Posted by longhorndave at 4:48 PM No comments:

For the Love of Baseball Cards

I honestly cannot remember which came first.  Me watching baseball.  Or me seeing and collecting baseball cards.  The time was 1979 and I was 5.  I was familiar with baseball (and had probably seen on TV) but I have no vivid memory of a specific instance (for reference my first two specific sports memories are Super Bowl XIV and Miracle on Ice which took place within a month of each other the following year).  But I remember a very specific Sammy Stewart card who played for his favorite, and my soon-to-be favorite Baltimore Orioles team (having been born in Maryland).

From then on, can't remember where they came from or how I got them, but a collection was born.  A pack of 15 Topps cards (only game in town) was probably 25 cents if it was more than a dime.  In parallel I remember mini helmets that came from vending machines for about that price point as well.

The hobby collection took center attention throughout the early 80s, consider my Elementary School days of 1st through 5th grade.  My friends (now living in Texas) and I would save up our money (or beg our parents) for packs and study memorize the stats on the back.  We had our favorites for strange names (Shooty Babitt or Biff Pocoroba) or local team Houston Astros (Jose Cruz, Tony Scott, or Terry Puhl).  There were some that had funny pictures that became coveted as well.  Another kid on the street was a Yankees fan, so that immediately thrust cards of that team (Winfield, Reggie, Guidry) to high value.  There were new brands like Fleer and Donruss with different and fun designs.  I remember liking Kiko Garcia because he played for both my Orioles and Astros.  I remember a trade of a Carl Yastrzemski for Willie McCovey card (which I still have) in which it took some negotiation since McCovey had more HR (but the Yaz receiver was from New England).

Then the bubble of the late 1980s, when production skyrocketed along with artificially high prices (think beanie babies) seemed to attract a different kind of interest.  No longer looking for anything but a coveted rookie like Jose Canseco or Doc Gooden or Barry Bonds.  Kinds would throw out the "commons" they weren't worth the storage cost.  I indulged until late high school, then moved on to more adult things with a collection of nearly 10,000 cards to date.

So, looking back, what was the attraction of these?  Why were they so much fun?  Why is the hobby all but dead these days?  Or is it?

The attraction as a youngster was the initial access to the game.  Long before cable and even when your local team would be on TV every night, these photos and these statistics were all you had to connect to stars like George Brett or Dale Murphy or Pete Rose or Johnny Bench.  If you got their card, you kept it because you knew who it was.  Didn't matter what it was worth, it became the center of the collection.  Even miscuts, error, or soiled cards (virtually worthless on the market, I even had a Gaylord Perry torn up by the neighbors dog) were cool because it was something different.  I remember the excitement when my aunt turned over my older cousin's baseball cards to me and another younger cousin (which we ravaged via an organized free-for-all) before she was going to throw them out, opening the window for some earlier 80s and late 70s additions to the collection.

Later the collection morphed into simulating games on the living room floor with building block stadiums, cards strewn about in defensive configuration, a legit lineup of players (from different generations) and a lego head flicked across the floor for the ball in some sort of organized fashion.  I remember one of these games Doug DeCinces made three errors.

My collecting (as mentioned above) seemed to wane as time in high school turned to other interests as happens.  At a certain age I could (and would) just drive myself to an Astros game instead of needing the cards for access to learn about players.  Computer game simulations came into play where you could have games with real stats determining the outcome (Micro League Baseball and Computer Baseball two of my favorites).  The collect-for-value bubble had burst, and no cards were going to be hundreds of dollars for a 50-cent pack find (shocking I know, lesson in economics).

So where does this leave my collection today?  I value it.  I love looking through it.  My 10-year-old inner self feeling of excitement is reinvigorated when I see some 1982 or 1983 cards of my youth.  About the time I stopped collecting via packs, eBay came along, and I had resources to go get some older (pre-1980) cards of players I liked or Hall of Famers.  The price point wasn't too high to get a Don Drysdale, Yogi Berra, or Hank Aaron.  I still like collecting autographs on cards exclusively.  Within the last year I've gotten autographs of Pete Rose, Dave Parker, Cal Ripken Jr., and Reggie Jackson (mostly pay-to-play at shows).


I enjoyed the recently opened "Shoebox Treasures" exhibit to Baseball Cards at the National Baseball Hall of Fame in Cooperstown, highlighting the full spectra of the cards from the business side to the fan side, and interactive.  The collection has thousands of interesting ones, including the "Holy Grail" displays to include the famous 1909 - 1911 American Tobacco Honus Wagner (which recently sold for over $7M in a private sale) and the 1952 Mickey Mantle (nearly double that) which my dad is sure he had many of before his mom (my grandmother) threw them out.  Would you believe that a number of those Mantle cards ended up in the bottom of the ocean?

Another way my cards got me through tough times was during the COVID-induced stoppage of league play, I decided to post a thread of baseball cards to pass the time, you can see that here: my Twitter feed.

Baseball cards had a unique place in my childhood and remain a part of my life today.  What I'm going to do with the cards?  No idea.  But I will say they're in any car I leave here for a hurricane evacuation.  And I won't stop collecting.  I recently perused some cards on the rack and pack of 20 was near $9 and I kept walking.  They might even hold value but that's not what I'm interested in.  Give me 17 cards to learn and memorize for a quarter, and I'm a happy kid.  What a time it was to be alive!