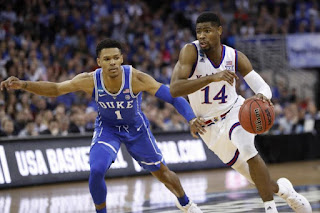 March Madness reaches its crescendo with the Final Four in San Antonio, TX.  None of the National Quarterfinal match ups was more of a back and forth brawl than elite programs Kansas and Duke squaring off on Sunday.  And it went to overtime.  And that's when our Sportsman of the Week took over.  Kansas' Malik Newman scored 13 points in overtime.  That was all of Kansas points, and enough to win the game by 4 (would have been 7 if not for a meaningless 3 by Duke).  Newman finished the game with 32 points, including 5-12 from beyond the arc and 11-12 from the free throw line.  In the Sweet 16 match up against pesky Clemson, he also led his team in scoring with 17 points including 4-7 from 3-pointers.  He had 7 rebounds in each game as well.  Newman also played 83 out of 85 minutes over the weekend.  He willed Kansas to the Final Four, can our Sportsman of the Week will them to a championship?
Posted by longhorndave at 9:20 PM No comments:

Check out our new feature in combination with the Ladies in Black Blog, called NASCAR Chat.  In this week's episode, LiB Lexie (who you have seen featured in my Blog for football picks) and I talk about Kevin Harvick's wreck in Fontana, California.  We also discuss how we would improve the tracks used during the playoffs as well as Lowe's no longer sponsoring Hendrick Motorsports #48 car currently driven by Jimmie Johnson.  Finally, we talk about new drivers Will Byron, Bubba Wallace, and Erik Jones.  Here is the full episode: 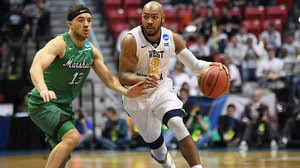 When the calendar says March, it's time for Madness.  Basketball madness.  In today's day and age, the favored teams seem to be loaded with one-and-done freshman and maybe a key sophomore.  But it's a senior who led his team this week to a Sweet 16 berth.  West Virginia's Jevon Carter provided that rare veteran leadership in positioning the Mountaineers for a Final Four run.  In two victories of over Murray State and rival Marshall, Carter posted 49 points, 11 steals, and 13 assists.  His total points are tops for teams still alive and the latter.  He only needed to play 29 minutes in the Marshall game because the team was coasting.  He was also 19-35 from the field, including 5-8 from beyond the arc.  Savage.  Carter is the kind of player that could turn greatness into legend the next two weeks, and he is the Longhorndave Sportsman of the Week!
Posted by longhorndave at 10:06 PM No comments: 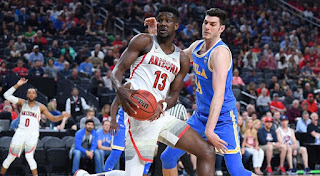 The NCAA Men's and Women's conference basketball tournaments officially kick off March Madness.  Win and you're in.  Lose and, in many cases, your season ends.  But everyone has a chance to win their tournament.  Through buzzer beaters and upsets, the Arizona Wildcats solidified their NCAA tournament position by winning their 7th conference tournament title (and third in four years).  Led by a freshman from the Bahamas.  Deandre Ayton is showing he's ready for the next level.  In Arizona's dismantling of UCLA and USC in the semifinals and finals, Ayton played 79 out of 85 possible minutes.  The 7'1" phenom tallied 64 points, at 75% from the field, 90% from the free throw line and hauled in 32 total rebounds.  During the regular season he averaged 20 points, 12 rebounds, and 2 blocks.  Look for Arizona to make a deep run, as Ayton is Olajuwon-esque unstoppable.  And our Sportsman of the Week!
Posted by longhorndave at 9:54 PM No comments: 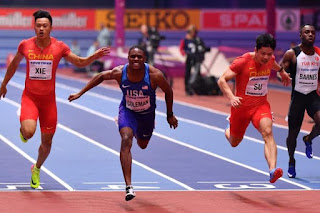 It's time for Spring sports.  Football is over.  Olympics are over.  Baseball hasn't started.  Basketball isn't quite to March Madness.  And NBA and NHL are in the dog days before the summer playoffs.  So why not track?  World sprint championships are a big deal.  And we have one.  American Christian Coleman won the 60m World Championship in Birmingham, England..  Time is 6.37 this week as he reminded us when he had a 6.34 a month ago.  He's a full stride ahead of the field in an era where the Justin Gatlins and Usain Bolts are head out to pasture.  Remember the name.  He's only 21.  And fast.  At 5'9" and 160 pounds, he seems built for championships.  Like 2020 Tokyo.  Or 2024 Paris.  The sky is the limit, and Coleman is the next great American sprinter.  And our Sportsman of the Week!
Posted by longhorndave at 9:23 PM No comments: