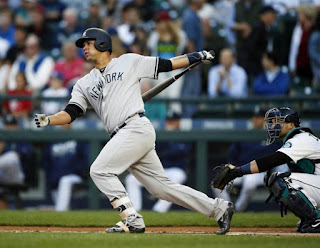 Babe Ruth's career slightly predated this Blog (and all Blogs, and the internet, and even televised baseball games.  But the latest New York Yankees hitting prospect is drawing comparisons, and it's completely justified given his numbers.  Catcher Gary Sanchez was the start of the Yankees youth movement, in many ways hastening the retirement of Alex Rodriguez.  Since his call up on August 3, Sanchez has been torrid.  Eleven home runs in 21 games.  Team is 12-9 over that span, thrusting them back into the American League Wild Card discussion.  For this week, Sanchez was 5 HR in 6 games (he's not slowing down), 12-23 (8 of the 12 hits for extra bases), slugging 1.304.  As Mark Teixeira said, teams would walk Sanchez to get to Babe Ruth at this point.  And he's right.  Gary Sanchez is our Longhorndave Sportsman of the Week!
Posted by longhorndave at 8:48 PM No comments:

College football fans will want to check out a new YouTube show.  Modeled after ESPN's The Sports Reporters, we hope to discuss the biggest college football stories each week.  My friends Kelvin Lapierre and Michael Prosser and I walk through some of the keys of the first week, including the Tennessee vs. Virginia Tech showdown at Bristol, big matchups in Texas, including Oklahoma at Houston, Notre Dame at Texas, and UCLA vs. Texas A+M.  We talk the Florida State QB situation (projected playoff team) and whether or not Oregon is in a full blown slide.  And to round it out, a lot of Big 12 expansion discussion.  Check out the show here and subscribe to the Campus Tailgate channel!

Posted by longhorndave at 8:35 PM No comments:


The Summer Games of the XXXI Olympiad in Rio de Janeiro, Brazil, were nothing less than a success on the fields, courts, pools*, roads, course, beaches, oceans, tracks, and any other surface I missed.  More on pools in a minute.  The environment around the games was not as crisp.  Reports of unsuitable quarters for the athletes, rumors of unsafe conditions on the streets, and some events not selling tickets as expected (and, shockingly, those in power scalping tickets) provided some tarnish, but fans tune into watch sports and their athletes, not a documentary on a city.


So how was the TV coverage?  Excellent, good, bad, and worse.  But mostly good.  This is reflective of the United States coverage of the Games, I cannot comment on other countries TV coverage.

Event on air talent.  NBC did a great job of bringing in event experts that could break down the events for a layperson to understand.  Be it Water Polo, Gymnastics, Volleyball, Golf, you name it.  Ato Boldon and Sonya Richards-Ross were particularly strong in Track and Field.  Announcers had a great balance of commentary or letting the moment speak for itself.  There were a few cases of gender bias noted (in my opinion limited to individuals, not systemic), but in whole, this was a strength.

Focus on United States.  Let's face it.  Americans do not watch Fencing (or Judo or Equestrian or Volleyball or Water Polo and I could go on).  But if there is an American stake, I'm going to watch.  NBC again did a good job of focusing on United States while still showing great moments from other sports.  I never felt like either was let down, the balance was good.

Mike Tirico.  One of the great broadcasters/anchors of our era, great they signed him in time to do these games.  He's extremely knowledgeable, his demeanor rubs no one the wrong way, and he's extremely well prepared.  He's not overbearing and his ego is in check (unlike other talent).  Next Olympics he needs to be the featured guy.

Interviews.  The balance of interviews either just after the event (excellent) or in the studio (pretty good) were fun to watch.  The event ones were sometimes awkward due to the instant nature of them, but athletes and on court/field media talent were a strength.  Good example was Carmelo Anthony just after the United States Men's basketball win or Lewis Johnson on the track.  The studio interviews were nice, but canned questions and predictable answers sometimes left me thinking that it was gratuitous.  I still watched, though.

Breadth of coverage.  With all the channels within the NBC network, no event was left uncovered.  You could review the daily schedule and find your event no matter what it was.  At worst, you could revert to online watching.  It was frustrating in that many times it was unclear what event was starting when, forcing you to watch another event for fear you might miss what you wanted.  A more clear itinerary (which changes in real time) is an improvement to consider here.

Focus on off field issues.  This is not all NBC's fault.  Ryan Lochte focus (he's just one very bad person among a thousand athletes).  Focus on who had their hand over their heart (mostly on social media).  Who was wearing religious headgear.  But mainly Lochte.  He and his teammates acted foolishly and their Olympic legacy is forever impacted negatively.  The drama was more of a TMZ nature, not worthy of continuous discussion at the expense of other stories.  By no means am I saying downplaying what happened, the behavior was despicable.  But like the hand over heart, focus on religion, etc., there were too many real inspiring sports stories that got less air time because of that focus.  Disappointed in the average American viewer that every single turn of events had to be turned into a racial divide (again, holding hands over hearts, treatment of Lochte, even the otherwise extremely inclusive Ellen DeGeneres was accused of a racist tweet...she was just trying to be funny).  I was hoping the Olympics could have been more uniting.

Bob Costas.  Retire.  Please.  He's offering very little these days.  His voice overs seemed over rehearsed at best, canned at worst.  He's way more interested in advancing his own profile than actually covering sports (in my humble opinion).  He acts like whatever he says is the most important thing ever (while a guy like Tirico is offering good, fresh insight).  The page of the novel needs to be turned.

Tape Delayed events.  The balance between the millions of dollars paid for the broadcast rights vs. sharing the moment with the world is the root cause.  Gymnastics mostly happened in the afternoon, yet NBC chocked their evening coverage full of replays to garnish ratings.  Everyone knew who won from online media.  You get to see the performances, but at that point, you're losing the part of your audience that is watching for the uncertainty, which is appreciable.  I know people who have to work, but show it live (on NBC) and let the United States engage in real time.

Opening Ceremonies.  Related to the Tape Delay.  The one event the World is watching and the United States were watching a delayed production.  Unacceptable.  Broken up by frequent commercials (put at every six minutes by some).  The parade of athletes was choppy with the commercial breaks and overall it just needed to be more of the happenings in real time, than the coverage.

In summary, I give a 7.2 (out of 10).  Get rid of Bob Costas and tape delays and you're approaching 9 out of 10.  Unfortunately, in the divisive country we live in, I'm not sure we can ever watch the Olympics and see everyone as Americans, instead of African American, European American, Muslim American, and so forth.  Maybe by Tokyo.
Posted by longhorndave at 7:45 PM 2 comments: 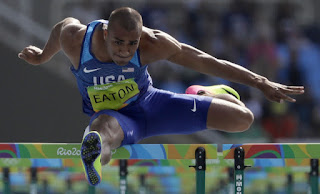 As the Games of the XXXI Olympiad wind down, there were countless stories of success, triumph, and disappointment.  With the second full week focusing on Track and Field, we'll look for the individual that proved to be the best of both Track and Field in the Decathlon.  American Ashton Eaton performed the grueling 10 event sequence in dramatic fashion to win his second consecutive gold medal.  The 6'1", 185 lb athletic wonder did running, jumping, vaulting, and throwing better than his competitors.  A true display of athleticism, he is crowned again as the greatest athlete in the world, and isn't that what the Olympics are about?  Ashton Eaton winds down our Olympics as the Sportsman of the Week!
Posted by longhorndave at 8:24 PM No comments: 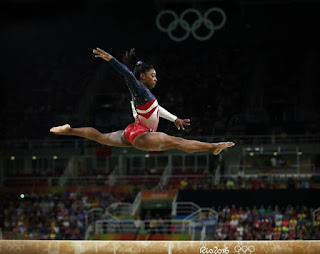 The Olympics continue and was clearly the sports story of the week.  Swimming, Gymnastics, basketball, cycling, contact sports and it goes on and on.  But it was gymnastics, specifically the United States women that took the spotlight.  Led by Simone Biles, who led the team to Gold, then won all-around gold, and took gold in the Vault.  Biles was three for three earning gold and in dominant fashion.  Two more shots at gold (the first ended in bronze today in balance beam; floor exercise is still to go).  But the first three were not even close.  The United States women had the event sewn up before the final event.  She beat her teammate by 2 points for the All-Around.  The distance between her and the 2nd place Vault finisher was larger than the distance between 2nd and 8th.  She represents the United States with athleticism, grace, and class, and is our Longhorndave Sportswoman of the Week!
Posted by longhorndave at 8:23 PM No comments: 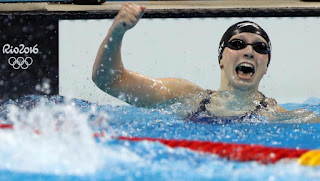 It was an eventful opening weekend of the 2016 Summer Games in Rio de Janeiro, Brazil (that's the XXXI Olympiad for those in a base four system) and sensational performances are already abound.  Tennis upsets, thrilling cycling road races, and a staple of the first week:  Swimming.  American Katie Ledecky was expected to blaze through the pool and that she did in the 400m freestyle final.  Blazing in terms of demolishing an admirable Silver medal swimmer by nearly 5 seconds, and breaking her own World Record by almost 2 seconds.  And the D.C. born, Baltimore native Ledecky is just getting started having also medaled in the 4x100m freestyle (silver).  She'll be gold digging for the 200m and 800m free styles in the days to come.  Hard to imagine she won't come home with two more golds.  And she is our Longhorndave Sportswoman of the Week!
Posted by longhorndave at 5:56 PM No comments: 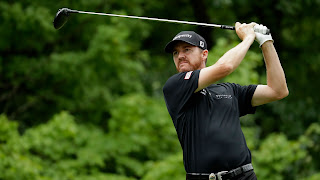 We're on a golf binge this summer but why not, as there were four first time major winners in men's golf for the first time since 2011.  The rain-soaked PGA Championship was mild on drama, but the winner was pushed to the end.  American Jimmy Walker distanced himself from the field, then fended off a late challenge by 2015 PGA Champion and World Number 1 Jason Day who Eagles 18 to push Walker to need a par.  Which he nailed.  Walker nailed four straight strong rounds, didn't bogey his last 28 holes (including two rounds on Sunday due to rain) and cemented his status as Major winner.  And he is our Sportsman of the Week.
Posted by longhorndave at 7:36 PM No comments: