As a big fan of competitive cycling (particularly the Tour De France) and baseball (particularly Major League Baseball), my sports innocence has taken a huge, sobering hit the past couple of years, with the undeniable guilt of former heroes Lance Armstrong and Alex Rodriguez.  It's insightful to evaluate how parallel their plights have been.  Each did things that no other human in their sport have done.  Each didn't want to just be one of the best, they wanted to be THE best.  Each denied well beyond the time period in which their guilt was obvious.  Both suffered humiliating suspensions and their legacy is forever shattered.


Greed
Armstrong - In a sport in which everyone was bending rules one way or another, Armstrong's ego got the best of him.  He wanted to do it for his (still honorable) Live Strong cancer campaign.  He wanted to do it for the United States.  He wanted to thumb his nose at Tour de France organizers that he knew would never be able to catch him.
Rodriguez - He watched other users (Bonds, Sosa, McGwire) juice up and shatter what had been hallowed home run records. He was probably the best clean player, but the others were getting all the attention and spotlight. It wasn't fair.

Denial
Armstrong - For a decade, he kept saying "no positive test, all speculation, I didn't cheat."  What he meant to say was "they can't prove it."  Finally, with the French authorities stripping his titles away with what they considered enough evidence (including eye witness accounts from former teammates), he ran out of friends and everyone knew the inevitable.
Rodriguez - Despite being suspended 50 games for prior use in 2009, then having his name all over the infamous Biogenesis clinic documents with another 162 game suspension, plus eye witness testimony of his patterned use, to this day, Rodriguez is trying to paint baseball as being on a witch hunt, implying that it's personal vendetta between MLB commissioner Bud Selig and him, and that the truth will come out.  Once again, only his own lawyers are believing him at this point, and they stand large financial gain from keeping the fight going.

Humiliation
Armstrong - Now banned for life, Lance Armstrong can't even compete in sanctioned triathlons or be in any way associated with Professional Cycling.  A pariah of the sport, he can only do what he can to raise money and awareness for cancer, and mostly stay out of the spotlight.  Still a popular figure it seems, his legend is forever tainted.
Rodriguez - He may never play in the major leagues again. He will fall short of all the home run records that seemed so easily within his grasp at age 31.  Even when playing, now clean, his power is gone and he breaks down physically.


Reconciliation
Armstrong - He seems to paint himself as the victim, one of many, and as if he was unfairly made an example.  Well, yes, you are the one who won seven straight TDF title.  You were the one who insisted you were clean.  To our faces.  No sympathy.  Perhaps he can negotiate some way to pay back the sport.  In the meantime, that decade of the Tour never happened.
Rodriguez - Has accepted full season ban (quietly), has not publicly apologized or shown any remorse.

Both of these guys fought to be the best.  They cut corners, bent rules, and ruined what could have been an incredible legacy on merit, hard work, and talent.  Great American heroes became great American shames. 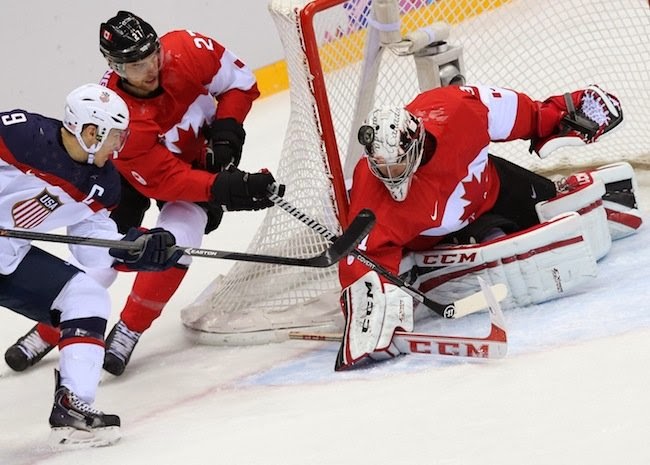 Week two of the Olympics, and in one of the most visible team sports in the Sochi Games, one individual stood out.  You can't win a hockey game if you can't score.  And in the knockout round of hockey during week 2, Team Canada goalie Carey Price took that to heart.  He allowed but one goal to Latvia's Lauris Darzins, then proceeded to shut out the number 2 seed United States, and number 1 seed Sweden over 160 minutes scoreless by the end.  Overally, Price stopped 70 out of 71 shots for a 0.33 GAA.  Against the most elite competition hockey has to offer.  Two of the games were slight one goal wins, so it wasn't that his perfect services were not needed.  Congratulations to Carey Price for being the Longhorndave Sportsman of the Week!
Posted by longhorndave at 6:23 PM No comments: 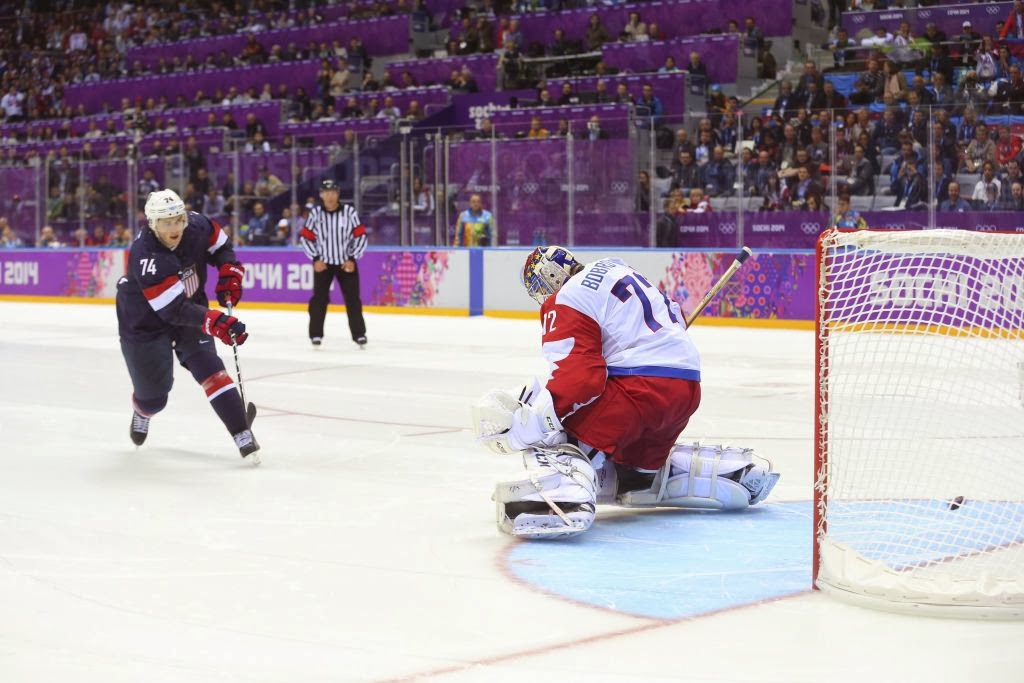 The 2014 Sochi Olympic Games kicked off this week, and heroes were aplenty.  But one individual athlete made the biggest name for himself in perhaps the biggest team sport in the games.  T.J. Oshie was a relative unknown just seven days ago, but suddenly was the most popular athlete in the United States in something like a 10 minute elapsed time.  During the United States vs. Russia preliminary (yes, preliminary) game, the superstars on both sides skated to a 2-2 tie after overtime.  T.J. Oshie made the only U.S. goal in the first three penalty shots, then drained three more over the next five rounds, twice needing it to extend the game, then the final one to send Team USA to the game, and group victory.  T.J. Oshie enters the annals of American Olympic history, and is the Longhorndave Sportsman of the Week!
Posted by longhorndave at 8:57 PM No comments: 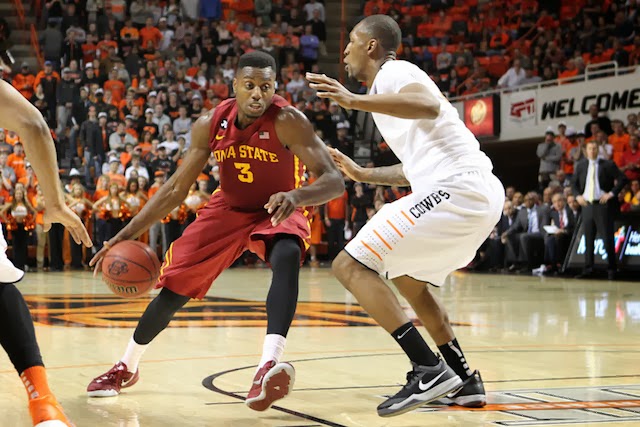 Football is over, so we move to the "spring sports."  This week we stick at the college level and start with the Number 1 (RPI, Sagarin) conference in America, the Big 12.  Iowa State's Melvin Ejim lit up TCU on Saturday with 48 points and 18 rebounds, setting a new single game point record in the Big 12 conference, now approaching 20 years old (if you can believe that).  Ejim also pumped in 22 points and 13 boards on Big Monday as they upset Oklahoma State in a triple overtime thriller.  In all, 70 points in 31 rebounds in two wins in the best conference in America.  Good enough for the Longhorndave Sportsman of the Week!
Posted by longhorndave at 7:49 PM No comments:

The carnage, the pure carnage!!!  It was the worst of times, it was even worse than that for Peyton Manning.  This shot of his brother, cleverly captured by Fox, tells it all: 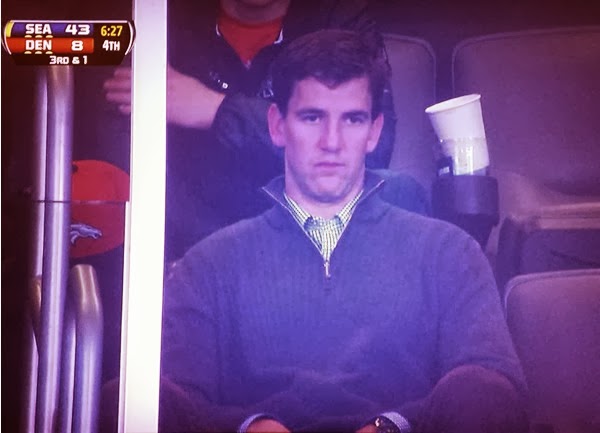 This picture tells a lot more stories than Eli's face.  Which is classic.  It literally looks like he's about to cry, as he witnesses his big brother get beat up by bullies.  There's empty beer cups behind him, reminiscent of a time in the game in which he might have felt like drinking beer.  This is not that time of game.  And who hasn't been there when you just turn the TV off.  Or shoot it with a gun.  But he had to keep watching.  They guy behind him, arms crossed frustrated, can't even wear his Broncos hat anymore.  And just the two of them, nobody else could bear to watch.  And of course, the score.  Brutal.  You could literally sum up the game with that one well-timed TV shot.

But here's some stats to make you think.  What if I told you the following:

Who would YOU think would have won the game.  Let alone not been blown out????  Shows what stats mean.  Turnovers, special teams scores, and a complete lack of any running game dictated the outcome.  Not to mention mental mistakes like the safety to start the game, and the constant pressure on Manning forcing the two turnovers.

Three factors I think that were underdiscussed.

Congrats to the City of Seattle, been decades since a team won something. And they are great fans. 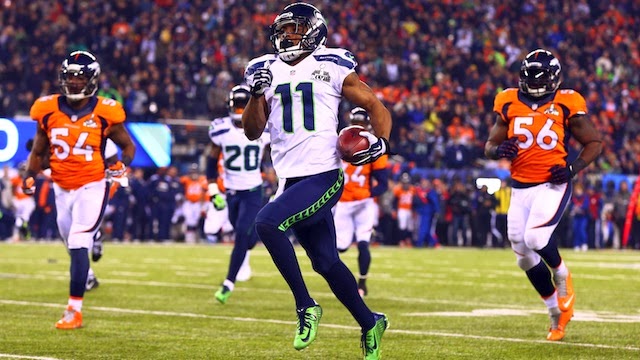 This might have been one of the toughest weeks to pick a Sportsman.  The Super Bowl itself named a defensive player who, while scoring a TD, wasn't that much head and shoulders above the rest of his team.  I thought about naming the entire Seattle Seahawks defense, but that's not how this Blog works.  So I'm going with another difference maker.  Percy Harvin really put the game away with his 87-yard kickoff return to start the second half.  It was "only" 22-0, with one Denver score away from getting things rolling.  But the oft-injured slash went off.  No only that, he was the Seahawks leading rusher at 2 carries for 45 yards.  137 total yards is enough for me, Percy Harvin, you are the Longhorndave Sportsman of the Week!
Posted by J.R. Ewing at 8:44 PM No comments: