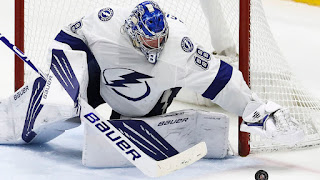 The Tampa Bay Lightning are looking to repeat as Stanley Cup Champions and while having a complete team, they've relied on their goalie the most when their backs are against the wall.  Andrei Vasilevskiy stepped up in Games 5 and 7 to pitch shutouts after his Tampa Bay Lightning fought the New York Islanders at 2 games to 2, then 3 games to 3.  He stopped all 39 goals over the two wins, including clinging to a 1-0 lead in pivotal Game 7.  Vasilevskiy has won the Vezina for best goalie in the NHL in 2019, he was runner up this year, but is likely to lead his team to back-to-back Stanley Cup Championships.  And is the Longhorndave Sportsman of the Week!
Posted by longhorndave at 10:07 PM No comments: 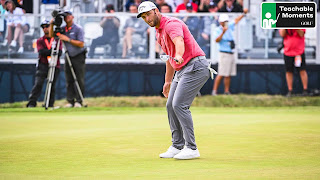 An amazing sports weekend ended with an amazing victor for the first major of his golf career.  Just a few weeks removed from what will likely be the most disappointing weekend of his career when it's all said and done, Jon Rahm answered any mental anguish with a magnificent performance in the United States Open.  Rahm punctuated a magnificent back 9 on his fourth round with two physics defying birdies on 17 and 18 to take a one stroke lead over Louis Oosthuizen who was a few groups back and essentially finished against the course.  Oosthuizen finished the last 3 holes at par, but it was a bogey on 17 that doomed him from keeping a tie with Rahm and going to extra holes.  Rahm was disqualified from a tournament just a few weeks ago when he tested positive for COVID and with a huge lead, was not able to play on Sunday.  The US Open was a financial and career reconciliation in winning the Spaniard's first major tournament in what might be many for the highly ranked 26 year old.  He is a rising star in the sport, and the Longhorndave Sportsman of the Week!
Posted by longhorndave at 7:17 PM 1 comment: 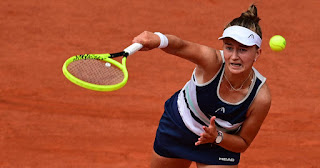 Winner.  Best way to describer our Sportswoman of the Week.  Win the singles.  Win the doubles.  At a Grand Slam.  Of course we're talking about Barbora Krejcikova.  An improbable unseeded single, and highly seeded double did things that haven't been done in decades.  Krejcikova began the weekend by downing another improbable finalist in Anastasia Pavlyuchenkova in the French Open finals at Roland Garros 6-1, 2-6, 6-4.  To cap off her weekend, she then won the doubles on Sunday with fellow Czech Katerina Siniakova beating Iga Swiatek and Bethanie Mattek-Sands 6-4, 6-2.  Entered Paris and never lost a match.  None of this was expected.  Krejcikova looked all the part of a Top 10 singles talent while not being ranked in the Top 30.  The Czech will be soon.  And our Sportswoman of the Week!
Posted by longhorndave at 8:46 PM No comments: 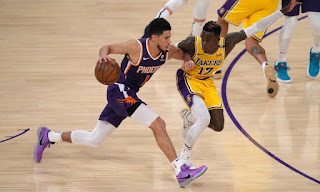 The NBA Playoffs are kicking as we're down to the Top 4 (okay one 5) seeds in each conference battling for the Championship.  Most eyes were on the defending champion Los Angeles Lakers who were fraught with injury during the regular season but seemed poised to make a run because, well, they have LeBron and Davis.  Not so far says Devin Booker.  The 24 year-old budding superstar put his team on his shoulders to easily close out the Lake Show in Games 5 and 6 after the first two games were split.  Booker poured in 77 points, 18 rebounds, and 8 assists during the week to guide his Phoenix Suns to double digit victorys and slay the dragon.  The 2-time All Star has led the Suns to its first Playoff Series since 2010 and it looks like they'll be a force for years to come.  Booker is the future of the league and the Longhorndave Sportsman of the Week!
Posted by longhorndave at 9:11 PM No comments: