Last week was like kissing my sister, with a 2-2-1 performance.  The sister kiss was made a bit worse by missing the pick of the week (Alabama).  But I didn't lose South Fork yet, so we press on.

The difference between the elite in the MAC and the dregs of the Big 10 is that the elite of the MAC are better.  Both teams are 1-2 playing a pretty difficult schedule so far, but BGSU has a more quality win (over a Big 10 dreg Maryland).  Maryland is better than Purdue.  The Falcons win this one and it's not an upset.

Maryland is bad, but it's not like they're playing TCU or Baylor from the Big 12.  West Virginia isn't ranked, it's just way too many points.  This game has played close in the past, I don't see that the Mountaineers are going to beat the Terps this bad.

Everyone is high on the Raiders BUT let's remember that Arkansas team lost the week before at home to Toledo.  TCU hasn't had a good offseason in terms of player attrition but they are still the better team here.  Tech also might have a let down week, seems like a Frogs win by 7 would be expected, maybe more.

A very evenly matched game in the Pac 12 is ripe for the apple picking (for Washington) or grape picking (for Cal).  I pick apples.  California won a wild shootout in Texas last week, you wonder how much that took out of their team.  And their defense didn't look good.  Washington took a tough loss to a good Boise team, they should handle the Bears at home.

There are three intriguing Pac 12 games in prime time with road favored teams, this is one of them. Arizona under Rich Rodriguez has improved immensely.  It seems like every year UCLA is ranked pretty high then loses some games early. I like the home team in an early season "upset" (mild as it may be).

May the gambling gods be on your side, with no late scores to ruin a perfectly picked point spread! 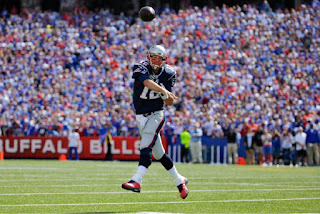 Football is in full swing and there were some amazing efforts in both the NFL and NCAA.  But if you want to talk video game numbers, look no further than New England Patriots QB Tom Brady.  It's getting harder and harder to keep him out of the "Greatest of All Time" discussion.  This week against the Buffalo Bills, he went all-EA Sports at 38-59 with 466 yards of passing and three touchdown passes.  That's unstoppable.  With Rob Gronkowski as his side-kick, this looks like an unbeatable team.  In a litmus test against the Bills, he came out complete acid to whatever they had.  And is our Sportsman of the Week!
Posted by longhorndave at 7:42 PM No comments:

Another college football season has started and I am back to give you weekly winners.  I would post my final results from last year, but the bankrupcy court took all the evidence during the proceedings.  Brutal.

Back to a traditional approach.  I take the ENTIRE college football Saturday slate.  And give you the top 5 winners.  Five gives you a win/loss every week.  Betting $110 to win $100.  If I find a juicy S/U or over/under bet I'll give you that, too.  But back to basics.

So what about this week?

I'll be honest, this is a feel pick.  I have KILLED it over the years betting on Duke.  Northwestern has some swag for beating Stanford, but I love the Blue Devils offense and don't like Northwestern away from home.  A TD is an easy win.

Oh the historical games between these two in the 1980s and 1990s in the Orange Bowl.  But alas, both teams are trying to regain glory.  Nebraska took a gut punch week one vs. BYU, but it was feeling itself out.  This is a bit of an anti-Miami pick.  I'm just not sold they are going to turn the corner under Al Golden.  I'll take the points and play.

I am a Longhorns fan, which gives me bias and gives me insight.  I don't think we know who the Longhorns are yet.  They have some talent on the field that is still figuring it out.  The Notre Dame game was an abomination but just one data point.  The game has uncertainty as Cal upgrades in competition.  It could go either way, but I see the Longhorns winning this one at home.

Iowa is playing some good football off the win vs. rival Iowa State.  And is at home.  Against a Pittsburgh team that lost their all-ACC RB.  Why is this just -3?  Under the lights, for whatever that is worth, I'll take the Hawkeyes (as I did last week) to win this by more than that.

I like the revenge factor and Alabama playing with hunger in a big game at home.  At night.  I really am down on Ole Miss.  I know they put up points, but that was against two or three levels of competition below the Tide.  I don't see this within 14 points let alone 6.5.  Sucker bet.

So place your bets people.  See you next week! 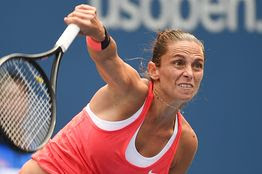 Everyone loves an underdog.  David vs. Goliath.  Or in this case, Roberta vs. Serena.  With a seemingly watered down women's side of the United States Open, Serena Williams seemed poised to make history by winning all four Grand Slams in a single year.  Champion of the Australian Open, French Open, and The Championships (known as Wimbledon) and completely dominating, enter Roberta Vinci.  The diminutive Italian went toe to toe with Williams and won.  On American soil.  Oddsmakers had the match at 300:1, this was a Miracle on Ice or Buster Douglas type upset.  Maybe more.  Roberta Vinci is 5'4" and 32 years old.  She's never made it out of the fourth round of singles (she is a top notch doubles player).  But 2-6, 6-4, 6-4, she stood among giants and captured youth.  Our Sportswoman of the Week!
Posted by longhorndave at 9:02 PM No comments: 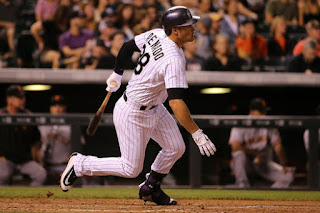 Our Sportsman of the Week probably tends toward pitching more than hitting and now is the time to change that.  A star is burgeoning in Colorado, and his name is Nolan Arenado.  In only his second full season in the big leagues, the 24-year old is quickly placing himself in the discussion of Elite.  Currently leading the National League in HR (36) and RBI (106, that's 2/3 of the triple crown, you know), he's already won two Gold Gloves (a third probable this season) and been an All-Star.  This week, he raked for 15 hits in 34 AB, homering in six consecutive games and knocking in 12 runs.  I know it's the rare air of Colorado, but note he now has 18 HR at home, 18 on the road.  Note it was 18-12 more on the road until his six at home this week.  The Rockies have a future MVP to build around, he is our Longhorndave Sportsman of the Week!
Posted by longhorndave at 7:46 PM No comments: 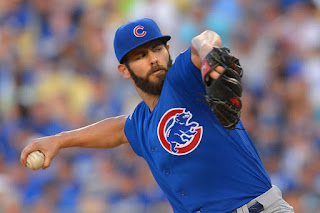 Another week of baseball and another no-hitter.  Against the Los Angeles Dodgers.  Chicago Cubs ace Jake Arrieta matched our sportsman from last week's feat, just nine days later.  On prime time Sunday Night Baseball, Arrieta fanned 12 Dodgers and recorded his MLB leading 17th win.  He lowered his ERA to 2.17 and reduced his WHIP to a microscopic 0.94 runners per nine innings for the season.  Arrieta finished an amazing month with six wins in six starts and only two earned runs.  Impressive enough for a likely Player of the Month and definitely impressive enough for our Sportsman of the Week!
Posted by longhorndave at 6:31 PM No comments: