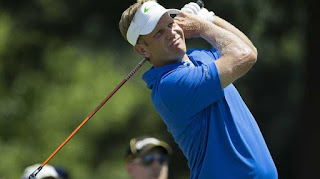 As we move past the NBA and NHL, so many sports going on (golf, horse racing, baseball, soccer, Olympic trials, etc.) finding a Sportsman of the Week requires judgment.  But we look for underdog.  Triumph over adversity.  Skill.  And positivity.  Enter Billy Hurley III.  Never won a PGA tour event.  Lost his father shortly after the previous years tournament (after he went mysteriously missing).  A United States Naval Academy graduate and Lieutenant (read American Hero).  Playing at the Congressional in Bethesda, MD, near his home in Annapolis.  Enough said.  Billy Hurley out-dueled very experienced golfers like Ernie Els and Vijay Singh down the stretch and did it with flare. A chip make at 15.  Approach shots rivaling the best in golf on 16-18.  He won by 3 strokes and now can keep his PGA card for some time without worry.  Good guys get rewarded.  Congrats Billy Hurley III, you're our Sportsman of the Week!
Posted by longhorndave at 8:38 PM No comments:

I promise I don't plan to make a habit out of this, but there were two good sports stories this week that were too incredible to ignore.  For the third time in blog history (first | second) I present co-Sportsmen of the Week 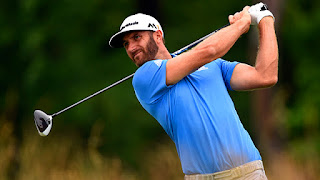 The label "best player without a major" can at best haunt a golfer for years (Phil Mickelson), at worst, haunt them for life (Greg Norman).  Dustin Johnson was in the "years" category as his tools seemed to inevitably place him on the path to greatness.  And it has, but after some detours.  After a much publicized suspension from the tour, he has returned and contended among the top golfers.  And at the 116th United States Open, he busted through. I'll spare a blog about the odd penalty shot ruling, and just focus on the fact that down the stretch, he was going pars and birdies, while the nearest contenders were going bogeys or worse.  A year after coming up short to one of the great sports stories of 2015 in Jordan Spieth, Johnson claimed his major.  And it is not likely to be his last. 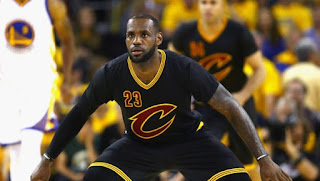 LeBron James is used to doing things that they say can't be done.  Given up for dead after losing three of the first four games of the NBA finals by double digits, the Cleveland Cavaliers rallied behind their superstar.  And he delivered.  In the three games of the week all won by the Cavs, James scored 109 points, 35 rebounds, and 29 assists.  Rounding up, that's averaging a triple double.  He also added nine blocks and nine steals.  The Golden State Warriors had no answers to him walking into their arena and walking out with their trophy.  It's James third nod as Sportsman of the Week, but his first since 2013.
Posted by longhorndave at 9:06 PM No comments: 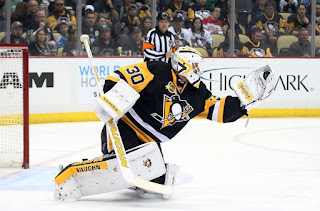 Nobody would have thunk that the Pittsburgh Penguins would win the Stanley Cup with rookie goaltender Matt Murray.  Murray made his NHL debut in December, but took a stranglehold on the Pens goalie position in March.  He won his final seven starts in March and April and was established as their starter in the playoffs.  In the four wins in the Stanley Cup finals against the San Jose Sharks, he allowed five goals.  For the week, 2 goals in the 2 wins.  In the playoffs, stormed through the Presidents Cup winning Washington Capitals, the defending Eastern Conference Champion Tampa Bay Lightning, and then Western Conference Champions San Jose Sharks.  The Pens never faced an elimination game.  Matt Murray is off to a hot start to his career, his name is on the Cup, and he is our Sportsman of the Week!
Posted by longhorndave at 9:07 PM No comments: 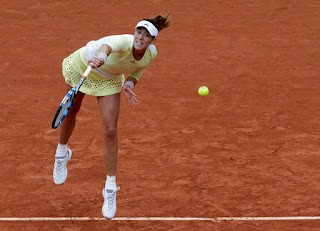 There was an upset at Rolland Garros in Paris, or was it a changing of the guard?  The defending French Open Champion Serena Williams was unable to defend her title against upstart Garbine Muguruza of Spain (Born in Venezuela) in a brisk two sets (7-5, 6-4).  Muguruza seemed to be the first Williams opponent to out Serena her.  More power.  More speed.  With Serena's recent (and not as recent) dominance, there hasn't been room on the stage for another women's player to run off a few tournaments.  Will Muguruza be the one? Her next test is at the Wimbledon Championship.  Where she met Williams last year in the finals.  Is a rematch afoot?  Only those that seed the players can make it happen.  But if Muguruza makes it two in a row, the guard might have changed.  For now, she breaks through as our Sportswoman of the Week!
Posted by longhorndave at 7:01 PM No comments:

In the days of instant social media updates, more blogs than players in any given sports league, and revenue driven by click bait (for blogs and major media outlets alike), there seems to be some subjects that are golden.  The sports media consumer cannot wait to read the latest that happened to Johnny Manziel, LeBron James, or Steph Curry's daughter.  But are they the most juicy subject of their respective sports?  Actually not.  I present the story lines that keep on giving to the media and consumers can't resist.  These are the ones that will be read in the papers or blogs, listened to on podcasts and sports radio, and debated on talk shows no matter what the season.

From the time the last piece of confetti settles on the Super Bowl sod until Mr. Irrelevant is named, every single football pundit develops a mock draft.  Make the 3 or 4 mock drafts.  Every week.  Fans can't get enough.  They watch the combine with glee, hoping their team selects someone with immediate impact or fill a need.  They crowd the live draft dressed in character as if they're going to be shouting at the opposing QB.  We've seen fans swear and cry (both in frustration and glee).  For the draft.  The draft news cycle goes for about 11 weeks (longer than half the actual season).  And every team go a ton better after the draft.  A perfect spring respite for the football starved.

Since the Big 3 (LeBron, D-Wade, and Bosh) took their act to South Beach, it became apparent to fans that the only way to win was to get guns for hire.  You can't be bad enough for long enough to get 2 or 3 major pieces in the draft.  In fact, if you make the bottom end of the playoffs, you usually end up in a endless cycle of mediocrity...never good enough to get a lottery impact maker, but not bad enough to move up.  See the Utah Jazz or Detroit Pistons.  But boy, if you could just sign Kevin Durant, have LBJ void his contract, team up with D-Wade and maybe lure Dwight Howard then you'd have something!  Salary Cap?  No worries, if you do a sign and trade and defer salary cap anybody can be yours.  And you might win!  Otherwise, welcome to one and done.

Nothing gets baseball fans young and old more spun up than to discuss a player's Hall of Fame eligibility.  From the last pop of the glove in the World Series until the class is named in early January, the merits of every eligible player are scrutinized, compared, discounted, credited, and generally twisted so much you don't know what they are anymore.  Is the player suspected of Performance Enhancing Drugs (PEDs)?  Should that matter?  How do you reconcile home run totals in the PED era?  Is it fair to pitchers in the PED era that their ERAs are higher?  Who is a historical player his is like that is in?  Not in?  Does 5 excellent seasons and 10 mediocre ones better than 15 good ones?  It goes on and on.  One year nobody was elected.  Now it's a boom of strong candidates like Ken Griffey Jr. and Randy Johnson.  Is that a good thing?  Hours of debates.

The NHL has a draft, and free agents, and superstars like everyone else, but more than any other league, teams like to relocate.  Usually from north to south.  Since 1990, five teams (almost 20% of the league) have relocated.  Minnesota, Quebec, Winnipeg, and Hartford all lost teams to warm weather cities (Winnipeg getting one back later).  The Carolina Hurricanes are the latest team on the relocation block, with Quebec or maybe Las Vegas in the rumor mill.  The fourth largest city in the United States (Houston) doesn't have a team.  Yet.  Florida and Arizona fight for relevancy in their cities (of mostly migrant residents from the north).

As college football has moved from no playoff, to a BCS (two team playoff) to a four-team playoff, the major conferences have realized that realignment was a part of survival.  After the earthquakes of 2010 - 2013, the Big 12 is the latest league to be rumored for expansion.  And the others never rule it out if the right team lands on their doorstep.  The fun part about realignment is that the ripple effects go forever.  If team A joins X conference, the Y conference will do this and Z conference will react and then the revenue will be $100 billion per year.  Plus rivalries are so storied that you can't imagine some of them ending.  But they have (like Nebraska vs. Oklahoma, Texas vs. Texas A+M, Kansas vs. Missouri).  My feeling is that it will not stop anytime soon.  The tendency is for larger conferences,  the Big 12 is likely to eventually dissolve with the SEC, Big 10, and Pac 12 picking up the scraps (after Texas and Oklahoma, not that many juicy prospects).  But the debate will never end!

No other sports can one player take a team from a losing record to a tournament run.  Two blue chips take you to the Sweet 16, 3 through 5 win titles.  Every year, 10 or so high school players are probably good enough to get drafted in the NBA, but rules prohibit their entry.  So they all decided to go to Kentucky or North Carolina or Duke and see if they can capture lightning in a bottle.  Which leads to coaches and boosters doing whatever it takes to land the recruits (see Louisville).  So recruit up, or find a new job.

Woods has been irrelevant as a force on the tour for years, but if he plays a practice round, it is the biggest news of the week in the sport, bar none.  Will he challenge Nicklaus's majors?  Will he even win a tournament?  Why did he break down physically?  Why was his relationship with his dad so complicated?  Did his romantic relationships doom him?  Should he make the Ryder Cup team?  The tour is as deep as ever, with tons of stars like Jason Day, Jordan Spieth, Rory McIlroy, etc.  But if Tiger plays, all cameras and stories are on Tiger.

Honorable Mention: Best players without a major, Who is the next Tiger Woods, The Ryder Cup, Dustin Johnson, Jordan Spieth

We love sports and these stories.  Without them, what would we do all day at work?

Posted by longhorndave at 11:13 AM No comments: