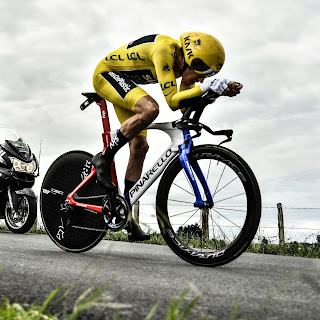 The Tour de France wrapped up an exciting three weeks of grueling mountain top finishes and harrowing crashes.  And there was a new winner for the first time in 4 years.  Geraint Thomas from Wales beat his own teammate favorite and a stacked field of up and comers to win the 2018 Tour de France.  Thomas along-side Froome protected the presumed Team Sky leader but consistently shaved time off in chasing down the other contenders.  Then in the decisive stages of the Pyrenees, Thomas accelerated to attack and Froome was cracked.  Thomas becomes the third winner from Great Britain in the last 7 years along side Froome and Bradley Wiggins (who combined have won 6 of the last 7).  But Thomas defied the odds, kept the title with Team Sky, and is the Longhorndave Sportsman of the Week!

Posted by longhorndave at 10:23 PM No comments: 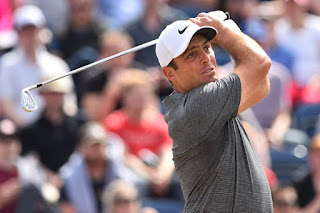 First time major winners are what we love.  First time major winner from an entire country is even better.  Francesco Molinari fits the bill.  Having not won a PGA tour event since 2010 before a win just three weeks ago, the Italian may be the hottest golfer on the planet.  In The Open Championship (a.k.a. British Open), Molinari held off prior major winners such as Jordan Spieth, Rory McIlroy, and yes, some veteran named Tiger Woods with whom he was paired on Sunday and at one point had a shot lead.  Steady was his hand, as he finished the last 37 holes at par or better.  Meanwhile, rivals succumbed to a missed shot here, sand trap shot there, three putt bogey.  Molinari just plowed clocked consistent shot after consistent shot and built a 2 shot lead in the clubhouse.  Rivals couldn't match.  Molinari seems to be getting better with age (now 35) and with this Claret Jug, has stamped his name in golf's elite forever.
Posted by longhorndave at 9:22 PM No comments: 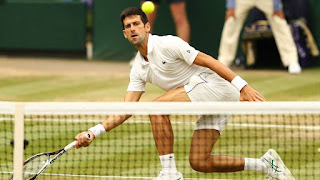 To win one of the greatest championships in your sport is quite an accomplishment.  To do it after an injury from which few thought you would ever get back to the top?  Career defining.  Novak Djokovic is already a legend of modern tennis, with 13 majors titles, but it seemed as if father time was catching up to the Djoker.  After 5 major titles in 6 tournaments in 2015 and first half of 2016, he seemed to have lost it.  The second half of 2017 he sat out recovering from injury.  He started Wimbledon as the #12 seed, but ended up number one.  His toughest match was the semifinals against #2 seed Rafael Nadal for which he won a tiebreak, then the fifth set 10-8.  Other than that, he only dropped 3 sets, none in the final to Kevin Anderson.  As Roger Federer and Rafael Nadal are toward the end of their careers (against which, he has a winning record against both), it looks like Djokovic isn't going anywhere.  And for the second time, he is the Longhorndave Sportsman of the Week.
Posted by longhorndave at 6:41 PM No comments: 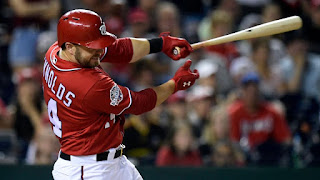 While this Blog recognizes a Sportsman of the Week, this is closer to recognizing a simple Sportsman of the Day.  Mark Reynolds of the Washington Nationals had an historic day on Saturday.  Ten RBI in a single day.  That's a decent month for many players, and a good week for the best players.  In his performance, he hit two home runs, a double, two singles, and did I mention the TEN RBI?  The day before he hit a pinch hit walk off home run.  The next day, a single and a double and a walk.  So it wasn't just one day.  But Mark Reynolds certainly raised eyebrows with his performance on Saturday and is the Longhorndave Sportsman of the Week!
Posted by longhorndave at 8:42 PM No comments: 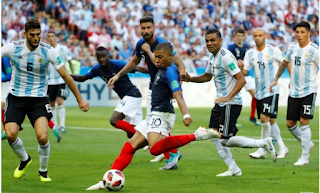 The FIFA World Cup continues with new stars (and new scapegoats) in every match.  In a thrilling knockout round opening day, one of the most anticipated round of 16 matchups was Argentina with the best player in the world Lionel Messi against France, featuring professional star Paul Pogba.  But it would be neither of these that would be the man of the match.  Kylian Mbappe of France announced his presence on the World Stage with two huge goals in the see-saw affair.  The 19-year old scored twice in the second half, the first to break a 2-2 tie at 64', then again just 4 minutes later in the 68' to push the Les Bleus up 4-2, a lead that secured the world quarterfinals.  Mbappe's first goal was a nifty move in traffic to create space and strike the ball just under the goalie.  The second was on a long attack in which he made no doubt of the goal from the right.  Mbappe looks all the part of international soccer legend, and is the Longhorndave Sportsman of the Week!
Posted by longhorndave at 7:45 PM No comments: