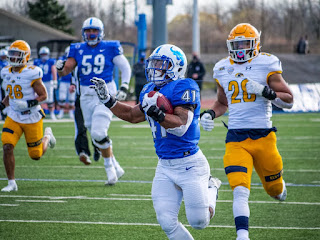 What a Thanksgiving week of football and what a feast our Sportsman of the Week partook in.  Record breaking.  Buffalo Bulls running back Jaret Patterson made minced turkey of the Kent State defense in a humiliating effort and turning eyes toward the MAC team that may be able to beat anybody.  Patterson made the Flashes look like a high school team in getting (wait for it), 409 yards.  And 8 touchdowns.  All this on 36 carries so that's a TD every 4.5 touches and 11.4 yards per carry.  Ridiculous.  This was coming off a 301 yard performance the week before.  And 4 touchdowns.  Patterson is making up for lost time due to the virus and taking prisoners.  Certainly a worthy Sportsman of the Week performance!
Posted by longhorndave at 7:35 PM No comments: 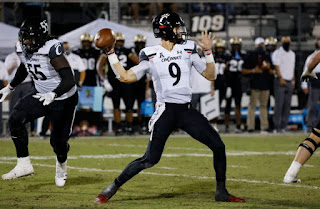 As the college football season enters Thanksgiving (rivalry) week it seems like it just started.  Well for some teams (Utah) it just did.  But other teams have been battling for a couple of months and making a push for a Conference Championship.  Enter the 8-0 University of Cincinnati Bearcats.  Officially the preseason pick for second place in the American Athletic Conference, they knocked off the favorite Central Florida Knights to take the top spot angling for their first outright conference title since 2009.  In a see-saw game against the rival Knights in Orlando, the Bearcats leaned on the strong arm and competent legs of their star quarterback Desmond Ridder.  Ridder pushed the ball down the field with his strong arm for a 21-32 and 338 yards for nearly 15 yards per completion.  And two touchdowns.  When he wasn't throwing he was running.  14 carries for 52 yards.  And two more touchdowns.  Clever decision making and dynamic athleticism made the Cats offense nearly unstoppable as they won the crucial game 36-33 (noting they were on the doorstep for another TD but opted to run out the clock instead of give UCF any chance to get the ball back).  Ridder did it all and the Bearcats are positioning themselves for strong postseason consideration.
Posted by longhorndave at 5:43 PM No comments: 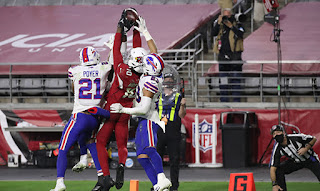 What.  A.  Catch.  Legendary for perhaps the best Wide Receiver on the planet.  Down and out, few seconds left, the QB throws it.  And our Sportsman of the Week hauls it in.  With three defenders around him.  Funny thing is, he made it look easy like there was no other outcome to be had.  The Arizona Cardinals steal trade of the offseason DeAndre Hopkins showed why he's the best WR by hauling in a 43 yard TD on a Hail Mary from QB Kyler Murray for the potential statement win for the franchise in the last 10 years.  The drama was fueled by a see saw game of two probably playoff teams that saw the Bills score what seemed to be the winning TD with a scant 34s left and the Cardinals needing a TD.  Kyler and D-Hop said otherwise and you will be seeing this catch for years, decades to come.  Greatness rises, and our Sportsman of the Week rose.   And caught it.
Posted by longhorndave at 8:04 PM No comments: 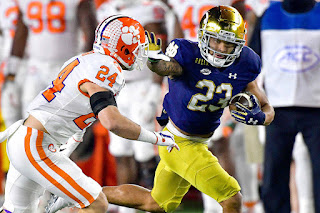 A definite candidate for Game of the Year, Clemson at Notre Dame delivered.  It had it all.  Talent all over the field.  Drama with a backup quarterback for Clemson replacing a Heisman Trophy favorite.  A team that hadn't lost a regular season game in years.  And Notre Dame.  Under the shadows of Touchdown Jesus.  And the game lived up to the hype.  It ended in overtime.  Notre Dame's Kyren Williams was steady in all aspects of the game.  The sophomore toted the ball 23 times for an impressive 140 yards, and 3 TD, including one in each overtime.  He was also a key cog in the blocking scheme that allowed Notre Dame to throw for over 300 yards in a workman-like effort.  He consistently found the blitzer and gave his QB time to find his man down field.  Williams joins an historic legacy of Fighting Irish running backs and will likely play on Sunday, and is a worthy Longhorndave Sportsman of the Week!
Posted by longhorndave at 8:22 PM No comments: 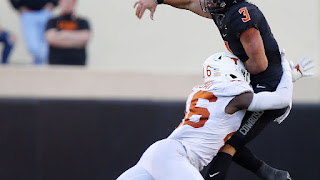 The man of the match, best way to describe the gutsy performance of our Sportsman of the Week.  Texas Longhorns linebacker Joseph Ossai terrorized the Top 10 Oklahoma State offense forcing turnovers, and in the end saving the game.  Ossai notched 12 tackles, including an astounding 7 for loss (not your typical tackle the running back after 5 yards).  And the three sacks were the biggest, one he forced a fumble, recovered two, another he ended the game on fourth down by chasing the Pokes QB Spencer Sanders in overtime for the Horns to beat the #6 Cowboys 41-34.  Additionally, he led the defense that held 2019 Doak Walker finalist Chuba Hubbard to under 100 yards for the first time in conference play since his freshman year in 2018.  Ossai wouldn't be stopped and is the Longhorndave Sportsman of the Week!
Posted by longhorndave at 7:53 PM No comments: