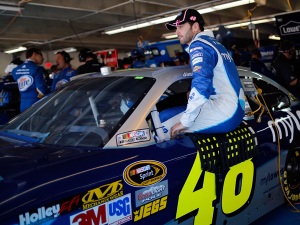 The "Great American Race" means something here.  In a thrilling finish in which 20 or so drivers were within 5 seconds, Jimmie Johnson outpaced the competition to win the Daytona 500.  To cap his 5 NASCAR Cup victories and his previous Daytona 500 win in 2006, Johnson proved that despite the hype surrounding Danica Patrick or the latest cup victory by Brad Keselowski, Johnson is going to be around to torment his opponents, and no victory in Daytona or on the Cup will be easy.  Johnson is a textbook case winner for the Sportsman of the Week!
Posted by longhorndave at 8:03 PM 2 comments: 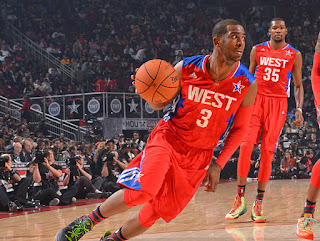 This week's Sportsman starred on the biggest NBA stage, while successfully leading his team in the first part of the week and putting his name in the hat for the NBA MVP award.  Chris Paul (a.k.a. CP3) of the Los Angeles Clippers, led his team to 3 easy victories (including potential playoff opponents like the Lakers and Rockets), logging under 30 minutes per game, as he cleared a double-double in all 3 games, shooting over 60% from the field while totaling 10 steals.  Then he totaled 25 points and 10 assists in the NBA All Star game, garnering MVP honors over the game's top scorer Kevin Durant.  Paul is a deserving Longhorndave Sportsman of the Week!
Posted by longhorndave at 9:42 PM No comments: 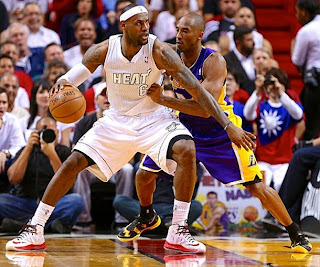 In the first week without football, we look to the "winter" sports for a star.  And we find him in LeBron James.  LeBron not only led the East-leading Miami Heat to a 4-0 record, but did it against solid West competition in the Clippers, Lakers, and Rockets.  But this wasn't an insane jacking of shots, he shot an incredible 45/61 (74%) from the field, plus 8/13 (62%) from 3-point land.  He chipped in another 23 assists while scoring 30+ points each game.  LeBron scarily may just be entering the prime of his career, but this week shows well as the Longhorndave Sportsman of the Week!
Posted by longhorndave at 9:29 PM No comments:

Why I think the refs got it right

Fans, sports writers, half the Harbaugh brothers, everyone is screaming that there should have been a holding call on the critical 4th down play in the final two minutes in which the ball fluttered harmlessly to the ground and enabled the Ravens to drain the clock for the victory.  I'm here to plead the case that the right call was made. 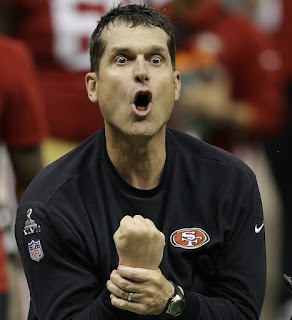 First off, I have no rooting interest in the game, I don't care for one team over another, nor do I have any lean toward a player.

But to me, the reason holding (or pass interference, or illegal contact) should be called is if/when the offense has earned position, and the defense can only take back that position by commiting contact.

Sure, there was contact.  But just about every pass has some sort of contact, the last thing we want to do is see flags on 3/4 of every pass play, this will turn into soccer with the flopping.  There's contact on every basketball play near the rim.  It's really only called if the offense was denied what they earned by the contact.  Nobody wants a game where Kobe can run right at a defender and get the contact call because it's impossible to get out of the way.  The same principle should apply here.

Same goes for offensive holding.  There's holding on every play, but it gets called if the defense earns position and the holding is the only thing stopping them from taking advantage of what they earned.

Specifically, if you watch the replay, the Ravens earned an early throw with a blitz.  The play's timing was off instantly.  Michael Crabtree ran AT the defender (wasn't trying to get by him) and engaged as the pass was being thrown.  As the ball was thrown early, the defender (Jimmy Smith) was playing the contact initiated by Crabtree (not thinking the ball was in the air, but rather anticipating the next move by Crabtree and well within the 5 yard zone).  As Colin Kaepernick had to deliver the ball early, he threw outside, the only place that was possible to complete.  Crabtree gave a token move that way, Smith, admittedly committed some contact as they disengaged (and actually dropped back as if he was pushed or was making sure he didn't continue the contact), but in the end, it was not contact that gained an advantage not already earned, the Ravens held the defensive advantage every moment of the play. 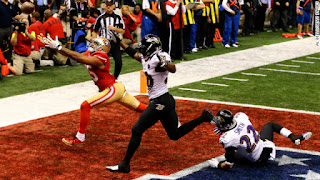 Again, one would hate for the game to not be decided on the field, and this was a case in which the Ravens earned that play and could have been denied, but the refs gave them the benefit and I think it was the right call.

Wonder how the replacement refs might have called it?

Posted by longhorndave at 9:03 PM No comments: 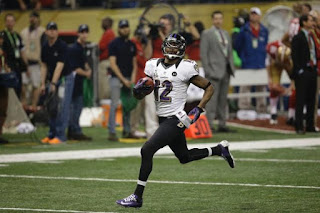 Razor close decision this week, but I leaned toward more the unsung hero in Jacoby Jones.  Jones has had a tumultuous 12 months in which he committed a critical mistake for the Texans in a loss to the Ravens in the playoffs (Jan 2012), then caught on with the same Ravens and has starred as a kick returner and receiver.  After catching that clutch pass against the Broncos to save the season from what seemed like doom, he came up HUGE in Super Bowl XLVII with a TD reception to end the 2nd quarter, then a 109, oops, 108 yard kick return to start the 2nd half.  While it didn't quite put a dagger in the 49ers, it certainly gave them necessary distance to hold them off at the end.  Jacoby Jones is a deserving Longhorndave Sportsman of the Week!
Posted by longhorndave at 8:23 PM No comments:

Without further ado, let's move along to get this out of the way so I can stop losing money:
February 3, 2013: 18:30 EST
Baltimore Ravens (+3.5, +170) vs. San Francisco 49ers (-3.5, -170) O/U 47.5
I saw something in Joe Flacco that I hadn't seen before.  Poise, confidence, and determination.  If he can go into New England and win, he can win on a neutral field against what I think isn't as good as a team.  The 49ers are playing with house money here, as Colin Kaepernick has come from nowhere to be "the man."  He's proved everything he can, but I think the Ravens defense contains him. Flacco (and a good backfield and reliable receivers) will be able to move the ball enough.  Ravens in a close one.
Final Prediction: Ravens 21, 49ers 17.

Mercifully this will all come to an end (from a gambling standpoint).  Hopefully on a positive note!
Posted by J.R. Ewing at 7:45 PM No comments: