Had a huge party for the Cowboys game to celebrate last week, we took care of 'dem Buccaneers.  But I digress.

I'm strong on this week's picks, plus I got a huge underdog teaser.


Pick #1
Arkansas (+420, +13) at Texas A&M
Texas A&M still is finding identity, can't look into much what happened in the rolling of SMU or SC State.  Arkansas brings a very wounded mentality to College Station and has a history of beating these guys up here at the new Texas Stadium.  Juicy money line is too good to pass up, Arkansas salvages a win here.

Pick #2
Rice (+260, +7.5) at Houston
Houston may be very, very bad.  Rice is battle tested and had some success in this rivalry.  I would have put it at a pick'em but bettors don't seem to appreciate the Owls.

Pick #3
Wisconsin (+395, +11.5) at Nebraska
Both these teams have stumbled out of the gate, particularly in west coast road games.  Another game I see even, but I get 11.5 points and a juicy money line?  Sign me up please, Go Sconnie!

Pick #4 (special edition for only $100)
Ole Miss (+4100, +30) at Alabama
Okay, I know, small chance of happening.  But maybe Alabama relaxes a little bit after some of their tough games, maybe Ole Miss isn't that bad with just the big loss to Texas in a game they were sloppy with the ball.  Just saying it could happen.  Alabama has looked a little underwhelming in some of their non-marquee matchups, oil men like me use venture capital for big hits, here we go!
Posted by J.R. Ewing at 9:32 AM No comments: 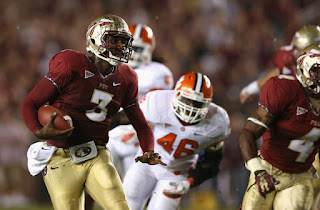 A great sports weekend, we're going to the college pigskin and looking for a player who came up huge in a big game.  E.J. Manuel for Florida State brought his team back (trailing Clemson 28-14 early in the 3rd quarter) with nearly a perfect performance, hitting 27/35 passing (77%) with 2 TD and 0 INT, and also ran for 102 yards on 12 carries for 8.5 YPC.  All in a crucial ACC matchup of Top 10 teams. Heisman is in play here, folks, as is a BCS Championship game berth.  Congratulations E.J., you are the Longhorndave Sportsman of the Week!
Posted by longhorndave at 6:29 PM No comments:

I missed last week, got called out on Tuesday to go do some arm twistin', darn politicians are trying to restrict drilling in the Gulf.  Not acceptable for Ewing Enterprises.

Made a slight recovery on Week 2 by hitting Oregon State over Wisconsin.  The cheese is smelly up there this year, I don't know why.


Pick #1
Kansas (+275, +9) at Northern Illinois
NIU was a darling of mine Week 1, coming oh so close to cashing in against Iowa (given 10 points). Now THEY'RE giving 10 points? Kansas is going to be a team that gets better week to week, after the loss to Rice, they were competitive against TCU, this isn't as formidable opponent.

Pick #2
Oregon State (+250, +7.5) at UCLA
Going to double down on the Beavers, not convinced UCLA is as polished as people think.  Oregon State has just had 1 game, for better or for worse, but it was a big win.

Pick #3
Kansas State (+425, +14) at Oklahoma
I don't feel like we know how good OU is. They may not be that good. KSU may be very good.  Or the opposite might be true. But a juicy money line here is too much to pass up, OU could stumble at home (admittedly for only like the 4th time in Bob Stoops reign, but still).

Just need to hit 2 of these and I'll be swimming in cash.  Shiner beer for everyone!
Posted by J.R. Ewing at 8:50 PM 2 comments: 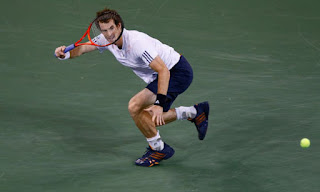 Difficult choice this week, but going with a new Grand Slam tour winner, albeit on the previous Monday (with rain delays).  Andy Murray has had an incredible season, with his emotional run to the Wimbledon final, and Olympic gold medal (on the same court over the same opponent) and now a coveted Grand Slam men's tennis win.  Keeping in mind, the US doesn't have one of these since 2003.  In any event, been a long week plus my time to post, but Andy Murray is the Longhorndave Sportsman of the Week.
Posted by longhorndave at 9:26 PM 2 comments: 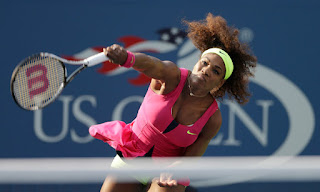 Another dominant two weeks in Flushing for Serena Williams, her 4th U.S. Open singles title and 15th Grand Slam singles title, with an amazing 79% win rate in GS Finals (2 of 4 losses were to her sister).  The 30-year-old has suffered only one loss (first round French) since May.  The first Wimbledon/US Open combo winner since the last time she did it 10 years ago.  Throw in some gold medals last month, and we have a very deserving Longhorndave Sportswoman of the Week!
Posted by longhorndave at 8:45 PM No comments:

Well I took a bath the first week, luckily I'm rich, I'll just sell a few more barrels of oil to pay the piper.  But let's move on to Week 2, I'm sure to improve.  Or else I just let John Ross start picking.  This week's new features, showing the spread AND money line, then my score will be based upon cash-ola.  $1G per pick, keeping it small.  But without further ado, here are the upsets of the week (must be a TD or more 'dog, picks are straight up.

Pick #1
Penn State (+325, +9.5) at Virginia
Typical overreaction to a Week 1 result.  Penn State had so much to deal with off the field, no wonder they tired in the 2nd half.  And Ohio isn't bad.  The Wahoos waltzed over FCS fodder, so we don't know if they're good.

Pick #2
Oregon State (+230, +7) vs. Wisconsin
Wisconsin looked off last week vs. FCS fodder, strong possibility they make a leap this week in improvement.  But on the road in Corvallis seems dangerous, the Beavers got an unexpected Bye last week due to Isaac

Pick #3
UTEP (+270, +8.5) vs. Ole Miss
Now I will overreact to Week 1, UTEP held OU in check (unlike their big brother UT Austin last year) while Ole Miss is rebuilding with a capital "R", allowing Central Arkansas to put up 27 points last week.  Throw in that Ole Miss might be looking forward to the Longhorns next week, watch out for the Miners.

So let's put on our big boy boots, reboot, and nail a couple games this week!


Trend definitely developing here, two of my picks have been spread coverers each week, with one complete botchery.  This week's botchery were the Rebels in Oxford, if you're going to go down swinging, make sure it's in a fun college town.
Posted by J.R. Ewing at 7:27 PM No comments: 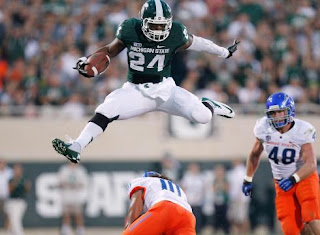 We turn a new leaf over to college football this week, this performer put his Top 15 team on his broad shoulders and carried them to a victory in a Top 25 battle against Boise State.  Michigan State's Le'Veon Bell touched the ball 50 times for 265 total yards and 2 TD's (his team's only 2 TD's).  Trailing by 3 in the 4th quarter, he touched the ball 5 times for 19 hard earned yards including the 5 yard dart for the go ahead score.  Then, on the time killing drive after that, touched it 9 out of 11 Michigan State plays before all the team had to do but kneel.  A gutsy effort for the Longhorndave Sportsman of the Week!
Posted by longhorndave at 4:32 PM No comments: