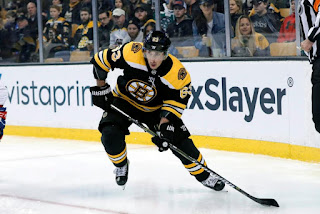 By pure volume of sporting events, late April and early May are one of the best times of the year with 3 or 4 NBA/NHL playoff games to go with a full slate of MLB action plus the usual other spring college sports.  This week we turn to the NHL playoffs where every series is a battle and it's a grind to rise to the top.  One of the best first round matchups were Original Six members Boston Bruins vs. Toronto Maple Leafs, and it was the Bruins who came out on top thanks to our Sportsman of the Week.  The Bruins LW Brad Marchand took control of Game 7 with a goal and assist (+2 +/-) to seal the Leafs fate and advance the Bruins.  He followed it up with a road performance of 1 goal and 3 assists (+4) to enable the Bruins to take a 1-0 series lead on the favored Tampa Bay Lightning in Game 1 of the second round.  Nobody getting by easy, and if the Bruins are to make a Stanley Cup run, it'll be Marchand in the middle of it, our Sportsman of the Week!
Posted by longhorndave at 9:16 PM No comments: 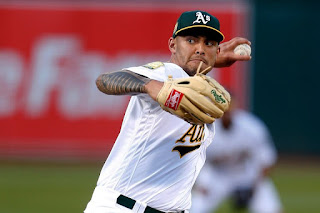 The weather is warming up, and so is the baseball action.  But no pitcher has been hotter in a game this season than Sean Manaea of the Oakland Athletics, who scored the first no-hitter of 2018.  The feat is more impressive in that it was against the team with the best record, and best offense in baseball, the Boston Red Sox.  Manaea got the 9 inning complete game with 2 walks and 10 strikeouts in an efficient 108 pitches.  He has long been considered a work in progress, in that his stuff was dominant, but seemed like he could not harness it.  Well through five starts this season, he leads the American League in innings pitched and has allowed only 22 baserunners in 36.2 innings.  And of the 5 runs he's allowed, 4 were solo home runs.  He's not giving up much, but on Saturday night, he gave up nothing hit wise.  And is a worthy Sportsman of the Week!
Posted by longhorndave at 10:35 PM No comments: 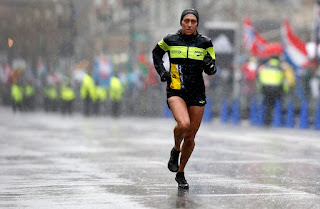 The Boston Marathon is one of the most iconic American sports events as it occurs in one of the oldest cities and features elite athletes from around the world.  Moreover, unlike other marathons held on a weekend, it is held on the third Monday of April, which is Patriots Day.  Patriots Day commemorates the anniversary Revolutionary War battles of Lexington and Concord on April 19, 1775.  But this is not a history blog, it is a sports blog.  As the Boston Marathon got more elite, it became more and more rare that an American woman would win the race.  But this year produced the first American winner since 1985, as American Desi (Davila) Lindon broke the streak.  In downright miserable (and slow) conditions, the 2012 and 2016 Olympian Lindon crossed the line at 2 hours, 39 minutes, and 54 seconds.  Far from a record or even her best time in Boston, the 34 year-old Michigander will be an inspiration to young American runners for years to come, and is our Sportswoman of the Week!
Posted by longhorndave at 6:37 PM No comments:

I'm honored to partner with the Ladies in Black Blog to collaborate on NASCAR Chat.  This week  LiB Lexie and I discuss last week's race in Texas including a win by Kyle Busch, one of her favorites as well as another penalty for Chase Elliott.  Next we discuss changes to the All Star Race in (Lexie's home town of) Charlotte in a month or so.  And finally, looking forward to Bristol on Sunday.
Here is the full episode: 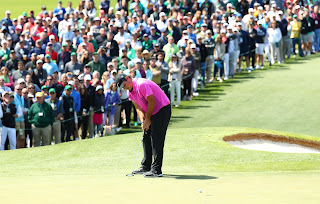 Another Masters and another first time major winner.  And we can't get enough.  After what had seemingly set up as a match play final, the top of the leaderboard was crashed by a former champion and another major virgin and drama on the last three holes.  But it was Patrick Reed who leveraged his 3 stroke lead coming into Sunday into a 1 stroke victory.  And his first major.  The incredibly likeable pro was bidding to go four rounds under 70, but did just enough to hold off Jordan Spieth and Rickie Fowler to secure his place in history.  Simply hitting par on the last four holes with a fury of birdies by Spieth and Fowler was enough to win his first green jacket.  Finishing under par for all four rounds, and a total of -15 on a week which saw low scores, Patrick Reed secured his place in Augusta lore, and is the Longhorndave Sportsman of the Week!
Posted by longhorndave at 8:33 PM No comments: 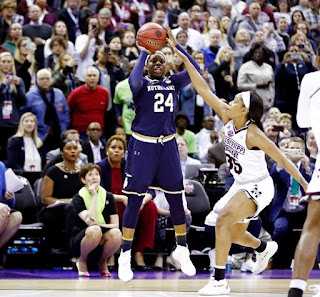 If you want to be the best, you have to beat the best.  And that's just what the Notre Dame Women's basketball team did.  The Fighting Irish completed an improbably National Championship season by defeating the seemingly invincible Connecticut Huskies (36-0) and last year's runner up Mississippi State Bulldogs (37-1).  But it was the style in which our Sportswoman of the Week defeated them that will make her legend.  Arike Ogunbowale didn't shoot particularly well in either game, but was unstoppable at the end.  Ogunbowale first slayed the Huskies with a 19 foot jumper with just a second left to break a tie in overtime.  Then against the Bulldogs, she hit a fall away three pointer under guard as the buzzer sounded.  She averaged 22.5 points her game in willing her team to the title.  The Irish overcame injuries to four players throughout the season to complete the improbably run, and Arike Ogunbowale made it happen as our Sportswoman of the Week!
Posted by longhorndave at 12:47 PM No comments: