Four reasons why it is okay to be a "Bandwagon Fan"

The context of being called a "bandwagon fan" is usually quite negative.  The implication is that you only support your team if they are winning, and then switch allegiances to winning teams if they are not.  To sum it up, you're the guy or girl at school, work, the bar cheering on every team that is winning and usually reminding others why your team is the best.  And you know what?  You should not be blamed.  It's normal, and even healthy in a sports fandom.

Examples of teams that have been accused of having bandwagon fans.  The Dallas Cowboys.  The Miami Heat.  The New York Yankees.  The Detroit Red Wings.  The Texas Longhorns.  Mostly teams that have won, and won a lot.  Whenever they are good, it seems like people you didn't even know watch sports start showing up at events with team hats and T-shirts and talking with sudden knowledge of the next game, match up, players names, etc.  And there is good reason why.

1. Winning is why we watch sports
When teams win, the media covers them.  They're the lead story on ESPNs Sportscenter.  Their games are on in the prime time slot every week (or multiple times per week).  Sports web pages start running in depth articles about players, coaches, fans, city, chemistry, etc.  It becomes easy to follow them.  You learn about the players.  They win.  You get that adrenaline rush.  You get drawn in (drawn in again, if you've been gone a while).  You look forward to dedicating time to watch them play.  This is everything right with sports!  The bandwagon fan loves to win!

2. Losing sucks
Watching a team you love lose is tough.  Watching them lose a lot takes some of the sports passion away.  We've all been there before, the team we cheer for and follow just doesn't get it right.  They blow leads, their best players get hurt, they get blown out.  Who wants to watch this (insert Cubs joke here)?  The point is, when your team loses (like the Cowboys the last decade) you don't buy T-shirts, you don't talk about your team incessantly, you don't talk smack.  That doesn't mean you're not a fan, you're just a fan in hibernation (I've been one for the Astros for four seasons now).  The bandwagon fan doesn't talk about their team when there is nothing to talk about.

3. Sports is a national affair now
There was a day when you really only could watch your local team every game.  Maybe one national game a week.  Even College Football only showed games that could be counted on a hand or two.  Now (even without pay packages) there are national games almost every day during the season.  Suddenly players like LeBron James and Mike Trout are seen multiple times a week.  Teams like the New York Yankees, Los Angeles Lakers, and Detroit Red Wings are on at least once a week.  Makes it MUCH easier to follow a popular team.  In some ways, the game coverage by outlets like ESPN dictate which teams you are going to see more and which teams they think are worthy of following.  The bandwagon fan is just playing along.

4. With free agency, sports has evolved from team fandom to player fandom
The free agency era has been with us for a few decades now.  But only in the past 5 - 10 years has it seemed that players flip much more quickly.  LeBron James free agent signing announcements become prime time events.  News of Alex Rodriguez free agency literally preempted the decisive game of the World Series.  Football not quite as much, but Demarco Murray certainly was a name in the news this offseason.  This means that fans follow players.  Who change teams.  And they change who they cheer for (see #3, it's a national affair now).  Yes, when LeBron played for the Miami Heat, it seemed like everyone was cheering for Heat.  Now he is back with the Cleveland Cavaliers and yes, there are more fans watching the Cavs.  This is natural.  We have our favorite team with local ties, then our favorite players.  We cheer for those players wherever they are.  Because the bandwagon fan loves superstars!

Can bandwagon fans take it too far?  Absolutely.  Don't act like you've been the guy that's cheered for the Cowboys every year when you haven't ever been to a game or can't name their defensive coordinator.  Don't throw your 27 World Series rings and talk about how great Babe Ruth was when you really just liked Derek Jeter (who wouldn't).  Don't talk about Hockey Town USA if you've never even visited Detroit.  You can cheer for the teams, but don't overplay your hand.  You are a bandwagon fan...know it and know your place.  And all is good.

So is the bandwagon fan annoying?  You bet.  Just like other teams' fans that cheer on while your team loses.  Is their fandom justified?  I think the four reasons above show why it is.  These fans are not going away.  But they're alright, so long as they know their place!
Posted by longhorndave at 5:14 PM No comments: 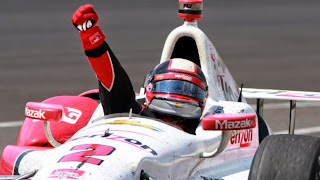 Memorial Day weekend is know for playoff basketball, playoff hockey, baseball, and the Indianapolis 500.  The 99th running of the Indy Car "Greatest Spectacle in Racing" did not disappoint with four drivers in the final mix over the last few dozen laps.  But it was Juan Pablo Montoya who emerged as the winner.  It would be one thing if he sat on the pole and just cruised.  But twice he was relegated to the back of the pack.  The first after a rough and tumble opening lap that saw contact dislodge a piece of his tail that caused an early pit stop.  The second upon a penalty in the pits much later in the race.  Each time he climbed over 20 or more drivers.  By the last few laps, nobody was going to pass him.  Montoya gets our nod for Longhorndave Sportsman of the Week!
Posted by longhorndave at 4:25 PM 1 comment: 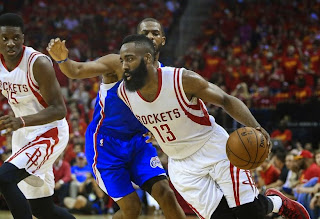 One of the most improbable comebacks in the 2015 NBA Playoffs happened this week, and it was the Houston Rockets coming back from a disastrous 1-3 start to win three straight games against the Los Angeles Clippers.  Most sports fans, including many in Houston, had given the Rockets up for dead after a 25 point loss in Game 3, then a 33 point loss in Game 4.  But our Sportsman of the Week responded.  James Harden of the Houston Rockets poured in 80 points over the next 3 games, also contributing 7 assists and 7 rebounds in the same games.  He knocked in 33 free throws over the games for three double digit wins.  The Rockets are moving on to the Western Conference finals primarily because of our Longhorndave Sportsman of the Week!
Posted by longhorndave at 10:31 PM No comments: 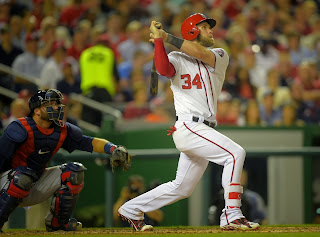 It's a very busy sports calendar, but this week's Sportsman of the Week was almost unstoppable.  The Washington Nationals slugger Bryce Harper had a three game sequence for the record books.  Bryce Harper hit six home runs in three games; the last was a walk-off home run to beat the rival Atlanta Braves.  For the week Harper was 10-22, 1 2B, 6 HR, 13 RBI.  And his team was 5-1 as they closed within 4 games of first place after a stumbling start.  The 2012 Rookie of the Year is already half way to his career high of 22 HR.  And it's not even May 15.  Congratulations to our Longhorndave Sportsman of the Week!
Posted by longhorndave at 8:13 PM No comments: 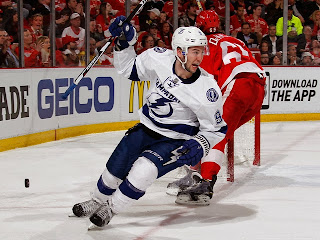 An amazing sports week wrapped up with outstanding performances across no fewer than a dozen sports.  We turn to the Stanley Cup Playoffs this week, as the end of the first round and beginning of the second round has given clarification as to who has a chance to raise the Cup in June.  Tampa Bay Lightning center Tyler Johnson announced his budding stardom with a dominating performance to not only propel his team past the first round over the perennial power Detroit Red Wings, but also get a big leg up against the favored Montreal Canadiens with a pair of wins.  For the week, Johnson netted 3 goals and 2 assists in four games.  Most importantly, his team was 4-0, winning three games on the road.  The Lightning sit in the drivers seat for the Eastern Conference finals as they head back to Tampa with a 2-0 lead.  The 24 year-old from Washington (state) is the future face of American hockey
Posted by longhorndave at 7:48 PM No comments: