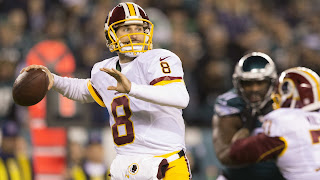 The NFL playoff picture is shaping up, and the NFC East was decided last weekend.  The Washington Redskins seized the division title behind once-criticized, now hailed quarterback Kirk Cousins.  Cousins sealed the division for the upstart Redskins with a near-flawless performance on the road against the Philadelphia Eagles on Saturday night.  Cousins finished the game 31-46, with 4 TD passes and no interceptions, picking apart the Eagles defense.  Cousins has now notched 300 or more yards in 3 straight contests (all wins) with nine TD and just one INT.  Not may pundits give the Redskins a chance to win their playoff game, but if Cousins keeps up this consistency, our Sportsman of the Week might surprise yet again.
Posted by longhorndave at 8:24 AM No comments:

After a less-than-successful regular season, things can only go up from here.  With 40 games on tap (a few have already passed), we look ahead to the best bets of the Bowl Season.  Instead of just sticking to ATS bets, we'll expand a little bit to straight up and Over/Under.  And in the spirit of the holidays, give you ten picks instead of just five.  $110 on ATS and O/U, $100 on S/U.  But first, a quick recap.

So with a big run here (including some underdogs S/U), a profit could happen.  Note that to me, games in which coaches have changed positions are too high risk.  You may get an inspired team, or a flat team.  But the unpredictability factor clouds the certainty.  Here are ten sure things to happen, and why:

Quick Lane Bowl (12/28 6:00 pm CST - Detroit, MI)
Central Michigan (+200) vs. Minnesota
Central Michigan is the hotter team having won 5 of 6 with just a single loss to a solid Toledo team.  Minnesota meanwhile has lost 5 of 6, and was weakened by the necessary retirement of head coach Jerry Kill (seizures).  I know on paper the Big 10 should be better, but with the game in Minnesota, this is a juicy money line.

Russell Athletic Bowl (12/29 4:30 pm CST - Orlando, FL)
North Carolina (+112) vs. Baylor
Baylor was a shell of their powerhouse team by the end of the year.  Coming off a home loss to non-bowling Texas, the Bears will also be without their NFL bound All-American WR Corey Coleman and top RB Shock Linwood.  Down to their third string QB they are still somehow favored against the North Carolina Tarheels which put a scare into Clemson in the ACC Championship Game with a late rally and miscalled onside kick.  That's number one Clemson.  Additionally, Baylor only notched one win since November 5 once their main players were decimated.


Russell Athletic Bowl (12/29 4:30 pm CST - Orlando, FL)
North Carolina vs. Baylor, Under 68.5 points
For the above reasons, Baylor won't be able to put up a lot of points.  Against Texas, they resorted to a grinding wildcat ground game that took the air out of their usual "score in 100 seconds" offense.  Their defense is more healthy and not bad. Carolina can score against inferior teams but not necessarily strong ones.  A 30-28 final is a high result to me, well under.

Franklin American Mortgage Music City Bowl (12/30 6:00 pm CST - Nashville, TN)
Texas A&M vs. Louisville, Under 47 points
In case you've been under a rock, Texas A&M has had 2 of their 3 scholarship quarterbacks declare their intent to transfer.  And Texas A&M struggled on offense with them.  But their defense is good, really good.  This seems like an easy 24-17 type game, not seeing either team score more than 28.


National Funding Holiday Bowl (12/30 9:30 pm CST - San Diego, CA)
Southern California (-3) vs. Wisconsin
At first I was surprised that the Trojans were favored.  I looked at Wisconsin and they have three losses to Top 5 playoff teams (Alabama, Iowa) plus a good Northwestern team.  But then you look at their wins, and playing in the Big 10 West, it's a pillow fight (best win is 2 points over Nebraska, look it up).  Then you look at Southern California that beat six bowl teams (while losing to five, including Stanford twice).  The game is in southern California, they'll cover.

Chick Fil-a Peach Bowl (12/31 11:00 am CST - Atlanta, GA)
Florida State (-7) vs. Houston
With all due respect to Houston, this is a significant step up in competition.  The main hope here is that Florida State thinks they have the easy road and the Cougars come out with their hair on fire.  Of all the scenarios I see, it's mostly Florida State blowout, or comfortable win.  Both scenarios more than 7 points.

Capital One Orange Bowl (12/31 3:00 pm CST - Miami, FL)
Clemson (+160) vs. Oklahoma
This is the number 1 vs. number 4 matchup (by committee) so you would think Clemson would be favored.  And this is more of a home area for Clemson which plays in Florida much more than Oklahoma.  Another secret, when Oklahoma made their run for the Big 12, it was against depleted teams like Baylor (see above) and TCU (barely won at home).  Oklahoma lost to Texas, Clemson hasn't lost.  Like the money line here.

Buffalo Wild Wings Citrus Bowl (1/1 12:00 pm CST - Orlando, FL)
Michigan vs. Florida, Under 39.5 points
It's defense against more defense.  Remember when Michigan had three straight shutouts and five straight games with only 14 total points allowed (including games against BYU and Northwestern)?  Eight times, Florida won games allowing 14 or fewer points, including shutting down Ole Miss and Georgia.  This just seems like a 21-14 game.


Valero Alamo Bowl (1/2 5:45 pm CST - San Antonio, TX)
Texas Christian vs. Oregon, Under 78.5 points
Both the offenses are explosive, but I'm a firm believer that with time to prepare, defenses gain advantage on offenses.  Only 3 times did TCU play a game that exceeded this total.  Six times did Oregon but it was mostly against vastly inferior teams.  I mean, 38-35 would be a shootout and fall short by a TD.

Motel 6 Cactus Bowl (1/2 9:15 pm CST - Tempe, AZ) - Pick of the Week
Arizona State (+1) vs. West Virginia
This is where the middle of the Pac 12 is just better than the middle of the (shallower by count) Big 12.  West Virginia has all of one win against a Bowl team (Texas Tech) whereas Arizona State beat four bowl teams.  Did you also see this game is in the Sun Devils' home stadium?  Why this is a virtual pick'em is baffling (trust me, West Virginia fans aren't excited about this team and aren't going to show up in droves).  State wins by 2 TDs.

And I sign off for another year.  I appreciate all the views as it's fun to line up and show how I roll.  It didn't work out that much this year, but next year I got it! 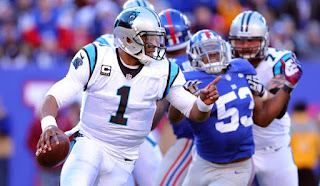 The NFL season has been defined by the dominance of the Carolina Panthers and their leader Cam Newton continues to take over games.  To the tone of 14-0 and MVP favorite.  Newton went to the Big Apple as the Big Cheese, and returned with a Big Win.  He ended at 25-45 and 340 yards with five (count 'em five) touchdowns (that's a 116.9 passer rating if you're keeping score at hom).  But wait, there's more.  He also ran for a team-high 100 yards on eight scrambles, continually saving his team on critical downs.  And the Panthers needed every bit of it in a nail-biting 38-35 win over the New York Giants, including an 8 play, 49 yard FG drive at the final horn leaving no time for the Giants to come back.  That's how you win in the NFL, and Newton is making it look easy.  He is the Longhorndave Sportsman of the Week!
Posted by longhorndave at 7:10 PM No comments: 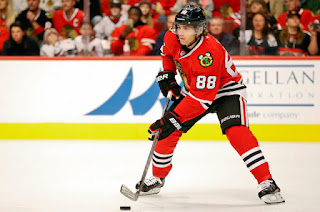 It's an amazing time for sports as the NFL enters its last quarter of the regular season, the NBA and NHL ramp up with story lines developing, and college football gears up for what promises to be an exciting playoff.  It's the NHL this week that has produced the emerging star of the game.  The Chicago Blackhawks' Patrick Kane is scoring points like nobody's business.  Record breaking style.  The 27-year-old American has a point in 26 straight games, the longest NHL streak since Bill Clinton was elected President the first time.  Kane's league leading 46 points are setting the pace for all players this season.  The last time he didn't score a point was October 15.  Two months later, the streak goes on for our Sportsman of the Week!
Posted by longhorndave at 7:09 PM No comments: 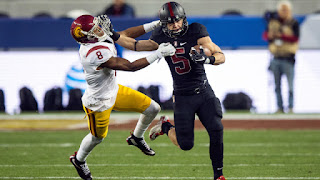 The college football season wrapped up in spectacular fashion with a main course of several conference championship games with playoff spots on the line.  Our Sportsman of the Week had a historic game in the one championship that didn't produce a playoff contender.  Stanford's Christian McCaffrey has quietly had the best all-purpose yards season of all time, passing the legendary Barry Sanders. He topped off his season with 472 all-purpose yards, including exceeding 100 yards each in rushing, receiving, and kick returns as the Cardinal smoked the Trojans of Southern California.  He also threw for a touchdown, you certainly can't blame the defense for coming up on him after a handoff.  Sometimes toiling out of the prime time window for many voters on the East Coast, McCaffrey has earned himself a trip to New York City for the Heisman Trophy presentation, and is a worthy Sportsman of the Week!
Posted by longhorndave at 6:41 PM No comments:

We are well past a point of no return for profit, but the concept of sunk cost to a businessman like me is well understood.  I made profit last week.  I can make profit this week.  It's championship game week and here you have the best five games going.  But first a recap.

Houston at home after an impressive win over a good Navy team seems like the right play here.  Temple can probably keep it close, but a TD win or more would be expected from the Cougars, who are playing for a New Years Six bowl.

On paper, this spread seems about right with Florida reeling from a near OT loss to Florida Atlantic then absolute domination by the Florida State Seminoles.  But the stakes are high here, so look for the Gators to come out strong (remembering their coach McElwain is familiar with Alabama).  Saban also has a strong "just win baby, no reason to cover" approach many times, milking leads late with predictable running plays.

Stanford is coming off an impressive win against Notre Dame and has a lot to play for.  Including an outside shot at the Playoff.  I think they're a better team by at least a TD and might put a statement win together if they get momentum.

Have you ever heard of "pulling a Clemson"?  Well we might see it this week.  The Tigers don't seem to be getting better.  Because of the depth (and by that I mean quantity of teams that aren't good) of the ACC, I'm not convinced that Clemson is that good.  North Carolina has a chip on their shoulder and I think wants to cause chaos.  I like the Heels straight up.

Michigan State is absolutely rolling.  And Connor Cook is healthier.  They didn't even need him to win at Ohio State.  Pat on the back for Iowa for the good season, but anything less than 10 points is a steal here.  Sparty on.

There will be a bowl pick special, unclear the format (all games, S/U, ATS, etc.) but it's been a great year (at least for excitement, not necessarily profit).   Thanks to all my readers!
Posted by J.R. Ewing at 8:23 PM No comments: