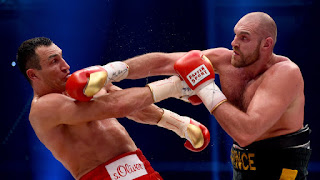 Upsets are what makes sports go around, and this week there was an upset nearly 12 years in the making.  Ukranian Wladimir Klitschko had dominated the heavyweight boxing ranks since taking the title in 2006.  21 straight fight wins had somewhat relegated the heavyweight division to an exhibition.  Enter Tyson Fury (perhaps the best heavyweight boxing name ever) who pulled off a 5:1 upset to win a unanimous decision in Dusseldorf, Germany.  The 27-year-old British behemoth Fury outboxed the suddenly aging Klitschko to a relatively non-entertaining, but decisive effort.  If nothing else, this shakes up the heavyweight division in the near term, perhaps brining back fans who remember the Tyson-Holyfield, Holyfield-Lewis bouts of a bygone era. Tyson Fury is our Sportsman of the Week!
Posted by longhorndave at 8:04 PM No comments:

The college football season is winding down and I got news for you. I'm going to lose money on the deal. That's why I'm not a professional gambler, but rather an oil baron. Nevertheless, we press on with our picks because sometimes I go 5-0 and you'll feel like you missed out. Unfortunately, 2-3 seems like the usual outcome just like last week.

Texas at home has been pretty good covering against decent teams (Cal, Oklahoma State, Kansas State).  After laying a dud in West Virginia and a bye week, the Horns rally at home to try and salvage a bowl bid.

Houston was an easy ride to ATS victory early in the year, but injuries at their critical QB position has led to close wins and finally a bad loss last week.  Navy comes in very hot with just that one loss to Notre Dame.  The ground attack will keep the Cougar air raid at bay and the Midshipmen emerge victorious.

You have to like getting any points with the Buckeyes.  After a dud at home against Michigan State, the team will either be hungry or fold.  I think hungry.  No better chance to wash that bad taste out than beat the hated Wolverines.  They've done it 10 of the last 11 years, and 12 out of 14.  No reason to think Michigan gained that much ground on the defending National Champions.

Wisconsin has three losses.  Two of their losses were to teams currently in the top 4 of the playoffs.  Minnesota has one win since October 10.  I don't see the Gophers staying with the more talented and underrated Badgers even as they try and win one for their retiring Coach Kill.

You might look at a rivalry game on the road between similar teams and think that a TD is too much for the visitor.  Oklahoma State doesn't seem to be playing their best football and Oklahoma does.  To the winner goes a good chance to win the Big 12 and make the college football playoff, look for Stoops to have his team ready for a 7-13 point win. 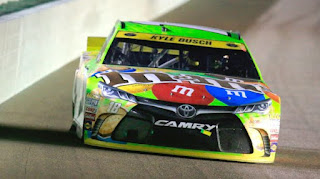 Busy time in sports, but this week to go off the Big Four for a comeback story.  Kyle Busch was just about given up for dead after a horrific crash at Daytona in February rendered him with broken bones in his leg and foot and shattered dreams.  Fast forward eight months, and the Toyota driver is your Chase Cup Champion.  Busch won a relatively easy sprint from a yellow flag against the field (including Kevin Harvick) that appeared to be stuck in mud to win the Ford EcoBoost 400 in Miami-Homestead, the final 2015 race and to secure the Chase Cup title.  A worthy Sportsman of the Week!
Posted by longhorndave at 7:47 PM No comments:

The season has taken a turn for the worse for sure.  The last set of picks on a blog were Halloween and I was haunted by an 0-5 finish.  Since then, I've been busy trying to land some oil deals with the price of crude so low, noting I only got a blog out on 11/7 and didn't make picks on 11/14.  I needed the breather.  The 11/7 picks were (2-3) with Houston and Penn State covering.

I will not be deterred.  Going with some hot hands this week, teams that have been covering week after week.

The Tar Heels are rolling averaging over 60 points the last two games.  Virginia Tech is limping along beating bad teams.  The higher the scoring, the easier it seems to cover just barely over a FG.  Good bet on Blue here.

Everyone's beating up on the Tigers, but the losses to the red hot Hogs and an inspired Alabama were understandable.  This is another rivalry game (they have like four counting Alabama, Arkansas, Texas A&M, and Ole Miss) and Miles will have his guys ready.  The wounded Tiger defends their pride.

I'm taking Oregon against any point spread at this point.  Novice bettors are remembering their early season struggles.  They beat a good Stanford team last week and still have a shot at the Pac 12 Championship if they get help.  They probably win by two TD.

The aforementioned Hogs have found their stride.  The Dawgs limp in after a physical whooping at the hand of Alabama.  The physical Razorbacks continue the pounding and roll by a TD in this one.

This is really an indictment of how bad the Aggies are playing.  This was almost a Top 10 team before Alabama took it to them.  With QB questions, the Aggies might struggle against a good Vandy defense.  But they have too many explosive players to keep it under a TD. 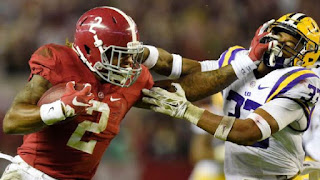 After 200 weeks of Sportsmen and Sportswomen of the week, last week's sportsman was vacant.  To make up from lost time, we'll award a Sportsman this week that could have been last week's as well.  Alabama's Derrick Henry went from somewhere near the Top 5 Heisman discussion to the clear cut favorite in two weeks.  First week, Alabama dominated Louisiana State to put a stranglehold on the SEC East.  The second week, Alabama defeated another SEC West ranked contender in Mississippi State to further solidify their position.  For the two weeks, 50 carries, 416 yards, and 5 TDs.  Which is 3 TDs more than both his opponents combined.  With an SEC title game and potential playoff run, 2000 yards is within reach.  Derrick Henry is our Sportsman of the Week!
Posted by longhorndave at 5:58 PM No comments:

The mainstay of my blog the last four years has been the Sportsman (or Sportswoman) of the week.  With just a few exceptions, I've managed to publish a short piece highlighting a strong sports performance over the previous week (always Monday through Sunday).  My criteria was simple.  Think broadly (not just the core four sports), favor the unsung over the famous, avoid repeats to the maximum practicable extent, winning your game is of the utmost importance, choose only one sportsman (only violated once), always include an action photo (which becomes my Twitter avatar for the week), and make it fun.

So here's a brief synopsis on how it's played out:

That makes 196 awards Sportsmen and Sportswomen of the Week starting January 1, 2012 with Keith Price, QB from Washington.

Baseball has had the most, but remember how long the seasons are and the summer is void of hoops and football.  Even archery and dog racing got in the act:

And was there a regional bias? Judge for yourself (remembering that New York, LA, and Chicago have a lot more professional teams).

Not all awardees are on teams, for tennis, golf, Olympics, etc., there are countries represented by individual or Olympic team sport athletes.

And lest we forget colleges, including some of my favorite team's rivals who sneaked in there more often than they should

And as I stated, I avoid repeat winners when possible.  But sometimes the performance dictates.

And there are just some oddities that result from such an exercise.  Here are a list of odd facts throughout the years.
Most of all, I want to thank you, the faithful readers of the Blog.  It's fun to come up with a Sportsman.  I can't promise to have one 98% of the time the next 4 years, but I'll try! 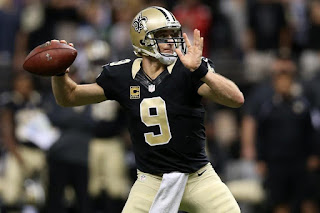 There is a new legend among Sportsmen of the week, and his name is Drew Brees.  The ageless, undersized wonder did it again for the New Orleans Saints.  In what can only be described as an old fashioned New Orleans shootout, Brees bested the New York Giants Eli Manning with a 39-50, 505 yards, 7 TD performance.  The 7 TDs ties a single game record for TD passes, just another notch on the future Hall of Famer's belt.  And every bit of it required for his Saints to prevail over the Giants 52-49 at the final whistle. The game was crucial to the Saints fledgling playoff hopes as the win moved them to 4-4.  This is Brees's third Sportsman of the Week nomination, and second in 2015 tying him for the most ever.
Posted by longhorndave at 6:49 PM No comments: