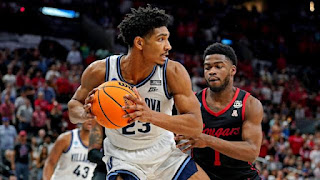 As the blue blood programs rose to the top of the NCAA March Madness heap, Villanova proved once again they were built for tournament play.  For the third time in seven years (only six Final Fours) the Wildcats are among the elite.  The last two, and three of the last four, they won the National Championship.  Against a surging Michigan, and perhaps the most dominant tournament team to date Houston, Villanova moved along relatively easily.  Led by a rare senior Jermaine Samuels Jr., they punched their ticket, Samuels Jr. led the team in scoring over the South Regional Semifinals and Finals with 38 points.  But it was efficiency that was his calling card, with a 61% field goal percentage as well as 8-8 from the free throw line.  All in 68 minutes and only 3 personal fouls enabling his team flexibility in keeping him on the court.  Will Samuels Jr. complete his career after his freshman year National Championship in 2018 with another?  Our Sportsman of the Week will give his all!
Posted by longhorndave at 8:34 PM No comments: 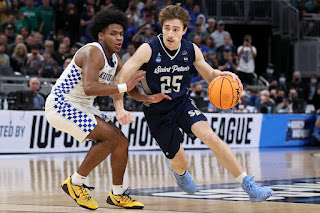 The first weekend of the NCAA Tournament is perhaps the most anticipated in the sports calendar with the volume and variety of games and teams all vying for a National Championship.  While there are usually some interesting upsets, the Sweet 16 typically recalibrates to the highly ranked teams.  Tell that to the St. Peter's Peacocks.  With absolutely nobody pushing them through on their brackets, they are dancing through to the second weekend.  The face of the amazing two game stretch is probably best personified as Doug Edert.  The slight guard came off the bench in both games to lead the team in scoring for the weekend with amazing shot after amazing shot.  What he didn't get in playing time, he made up for in efficiency.  Edert came through in the clutch in a monumental upset of the 2 seeded Kentucky Wildcats with a near-flawless 5/7 from the field (2/2 from 3-point territory) and 8/8 from the free throw line in a stunning 85-79 overtime win.  He followed that up with a 4/6, 1/2, 4/6 performance in the downing of Murray State 70-60.  He played no more than 25 minutes in either game but his clutchness defined what the Peacocks did.  And that was, survive and advance.  Edert is a worthy Longhorndave Sportsman of the Week!
Posted by longhorndave at 6:46 PM No comments: 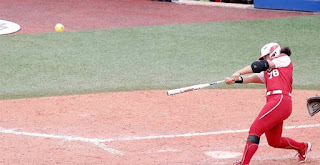 All-time home run records are what Ron Burgundy would call a "big deal".  And a new one was set at the NCAA college softball level.  Jocelyn Alo of the Oklahoma Sooners hit her 96th career home run, passing Lauren Chamberlain (also for Oklahoma) for the home run queen title as it were.  Alo did it in her fifth playing season, taking advantage of the COVID extended eligibility.  But before anyone calls this an asterisk situation, her breaking home run came in about the same number of games (224) as Chamberlain (220, okay, four more) and I'd put a plug nickel that you can take the 8 HR away from 2020 and Alo will exceed the career total anyway.  For reference, this was Alo's 8th HR of 2022.  She hit 34 last season.  An all time 3rd through 13th all played 236 games or more.  Alo is a true legend of the sport and her name will forever be associated with power and greatness!  Alo is the Longhorndave Sportswoman of the Week!
Posted by longhorndave at 8:46 PM No comments:


I typically stay out of the business side of sports.  If anything, I have a more pragmatic side than most fans.  Example, when someone on your team (e.g. Albert Pujols) that you belove is at a priced out of the value point, your team is better off to let him or her go (e.g. St. Louis Cardinals).  Fans scream "how could you."  I scream, "you had to."

For the unfortunate and, in my opinion, avoidable 2022 MLB lockout, I don't blame owners or players for fighting to maximize their profit from the game, that's what they should do.  Owners have the right to lock out and cancel games as leverage.  Honestly cancelling games has been a single thing that has brought about progress.

But players have the right to not agree to things they think is unfair (early career salaries, a de facto cap, manipulating player seniority) and wait them out.  They are the stars and should get a good portion of the proceeds.  So let's get past taking sides.

The rub is that it comes at the expense of the source of revenue and there is collateral damage.  The fans.  Each of the professional sides is calculating that damage and using it as a bargain to gain leverage instead of treating it as an eroding commodity.

In other words, owners think players surely have to concede because they don't want to appear as petulant and probably need the income.  We can wait them out.

Players think, no way owners can keep this up, they look horrible.  Especially if we tweet about it a lot. Look a Twitter poll favors us. They'll cave.

And here we are.

The overall negotiations are toxic.  I recall it was described by media as relatively negotiable issues (dividing up slices of the pie, not fundamentally changing the state of the game) coming into it.  Nothing like 1994 in which there were chasms to bridge (drug testing, a recent collusion conviction, etc.).  But now, we're talking universal DH, raise the minimums and caps, then sort out minor details like size of bases and playoff teams and pitch clocks in the process.  Then as things progressed, it just seemed to spiral downward and it was baffling.

Not necessarily because as the owners' negotiator he's not been giving a reasonable deal I'm not counting dollars.  In fact, there were times the owners would move the needle and the players would just walk away without further discussion "unimpressed".  As if they were entitled.

I blame Manfred for the tone of these negotiations.  A leader leads by getting his point across firmly, but listening and making the other side feel heard.  Finding ways to make sure things move forward.  I've heard nothing but the opposite.  We take one step forward and three steps back because players feel mistreated and unheard.  It's on him to ensure that doesn't happen.

There were ways to approach this in which the tone of the negotiations were set prior to a head.  Set the stage with "here's the things we're thinking, what are you thinking?"  Okay, let's put that aside and get to the numbers later.  Instead it seemed like Manfred just thought they would come in with the rule of law and players would have to agree.  Nope.  And players were right to stand up.  He's really failed the owners.

A good leader removes barriers to ensure customers get their product and Manfred has done the opposite.

As I said, I don't care who gets the bigger piece of the pie.  They'll both get pie.  I just want there to be a pie.  It's the commissioner's job to ensure it happens.  And he's failing.  Miserably.

Posted by longhorndave at 9:08 PM No comments:

In the times between NFL Football, March Madness, and MLB Baseball (if it ever starts again) we turn to one of the great North American winter sports, hockey.  The National Hockey League is entering the home stretch for the playoffs and the Dallas Stars are in the mix for one of the last playoff spots.  After this week, they are in.  Thanks to Jason Robertson.  Robertson led Dallas two three straight victories as a goal scoring machine, tallying 7 goals for the week.  More impressively, two hat tricks in a 48-hour span as he scored 3 on Friday against Winnipeg, including an overtime winner, then followed on Sunday with 3 more against Minnesota for two big road wins for the Stars.  Although in the Top 10 in the NHL in goals scored, the 7 goals scored this week in March were more than any full month in the previous months of the season.  Robertson is getting it done when his team needs it and is the Longhorndave Sportsman of the Week!
Posted by longhorndave at 6:31 PM No comments: 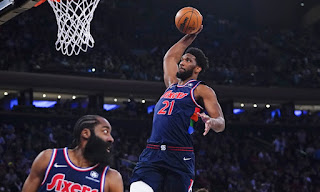 The NBA season is hitting the home stretch and new teams are emerging as favorites to make deep runs into the playoffs.  Maybe no more of a jump than the Philadelphia 76ers led by MVP candidate Joel Embiid.  The Sixers haven't won an NBA Championship in coming up on 40 years, but this may be their best shot.  Despite having finished first in the Eastern Conference last shortened season, the Sixers were trounced in the second round of the playoffs and haven't made it past that point since a Finals appearance 21 years ago.  Embiid has put the team on his back, including two outstanding performance this week coming out of the All-Star break.  In two games and conservative minutes, Embiid poured in 71 points, 19 rebounds, 6 assists, and 4 blocks.  These two games were his first with trade-target James Harden who appears to be ready to join him for a deep playoff run.  Embiid is ready to deliver the first Sixers title since Dr. J and is the Longhorndave Sportsman of the Week!
Posted by longhorndave at 9:02 PM No comments: