Cleaned up on the Rutgers d. Navy last week, giving me a ATS and the S/U upset special.  As a result, I lost $130 on the ATS, but gained $220 on the S/U.  Finally limiting losses and learning lessons.

Picking for Michigan or against Arkansas has been killing me.  So lesson learned, we move on.

Baylor (-22) at Iowa State
Iowa State matches up well with like teams that like to run and play defense (Kansas State, Iowa).  Baylor and their high pace, high scoring style is not like Iowa State.  And once Baylor gets rolling, they are hard to stop.  If Baylor overlooks the Cyclones, this could be close, but I don't see it that way.  Baylor puts up 40 or more easy and covers.

South Carolina (-5) vs. Missouri
Missouri seemed to be a little exposed last week against Indiana.  Traveling to South Carolina will be tough, with the Gamecocks coming off an impressive victory over Georgia.  There could be a USC letdown, the Cocks know this is a big game to decide the SEC East.  They'll win by a TD  Which is a cover.

Notre Dame (-9.5) at Syracuse (East Rutherford)
Notre Dame looks the part of a very balanced, and talented team.  The team looks comfortable against an up-and-down Syracuse (mostly down).  Look for the Irish to play well for their New York City area fans and win by 10 or more.

Texas (-12) at Kansas
It's been easy to pile on Texas this year, after the disappointing showing against BYU.  That was really one bad quarter.  Impressive in the other 11 quarters so far, including a game within grasp against Top 10 UCLA.  Texas pedestrian style should overmatch the Jayhawks.  By two TD.

Duke (+7) at Miami (FL)
Bettors still don't like Duke mainly for the "D" on their helmet.  Against admittedly weak opponents, they've put up 40 or more in 3 of 4 games (31 in the other).  While allowing 17 or fewer.  Miami is not that strong, this looks more like a pick'em to me.  Duke is the defending ACC Coastal Champs, they win this S/U.

Straight up Special
Duke (+220) at Miami
See above!

Can't believe we're already five weeks in, this week I clean up! 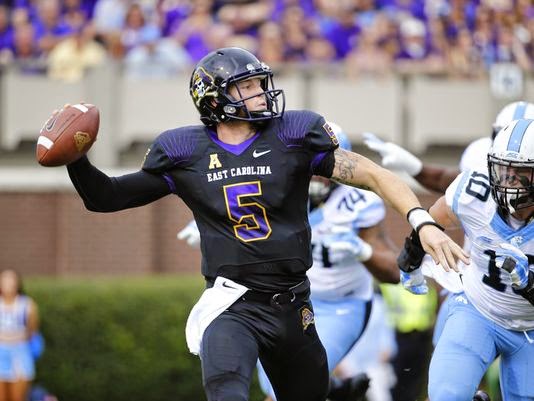 Football Sportsman of the Week continue, but we check down to the college ranks.  This blog likes big wins.  How about two big wins in a row!  Let's look at East Carolina QB Shane Carden.  The senior quarterback has led the upstart Pirates to two straight wins, both against ACC ranked teams.  On Saturday, Carden picked apart the North Carolina defense for 438 yards and 4 TDs in a 70-41 route of the Heels.  He was also over 400 last week at Virginia Tech and rushed for the winning TD.  Mr. Carden has the Pirates in good shape for a solid bowl, and is our Sportsman of the Week!
Posted by longhorndave at 9:14 PM No comments:

I guess things are looking up, I at least came near to break even this week.  Hit half ATS but missed the upset pick.  So just losing on the house take.  Upward trend though!  So here's the latest metrics:

Get on the bandwagon now, won't be room after this week!  Here are your five ATS picks plus the upset special!

Rutgers (+6.5) at Navy
Rutgers lost a heartbreaker to a good Penn State team last week.  This is a solid team that should be able to go into Navy (not the most hostile environments) and outphysical the Midshipmen.  Especially if you'll give me a touchdown.

Central Michigan (+3.5) at Kansas
Kansas is bad.  Really bad.  Central Michigan looked good against (Big 10) Purdue, then lousy against (ACC) Syracuse.  I still don't see Kansas winning this game.  If anything, CMU comes out with a chip on their shoulder in this one.  And you're giving me over a field goal

Michigan (-3.5) vs. Utah
Just barely over a field goal? Really? In the Big House?  Utah may play close (or may not) but if I had to pick a side this falls, it's going to go to the Wolverines by over a TD.

Clemson (+14.5) at Florida State
Jameis Winston now out for the FULL game, I'm not sure this line is valid (but it is at the time of this post).  I liked Clemson to be in this game when Mr. Heisman was only out a half.  Clemson has a chip on their shoulder.  FSU seems complacent.  Ripe for upset.

Straight up Special
Rutgers (+225) at Navy
Same reasons as above, this is a pick'em game at best and I'm getting some good money line.

Looking forward to an exciting weekend! 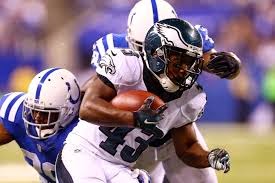 We just can't resist the NFL this time of year, and new (old) stars are emerging.  Darren Sproles of the Philadelphia Eagles looked like a man in a time machine.  The 5'6" (that's one inch taller than Jose Altuve) human jackknife had eleven touches for 178 yards (26 rushing, 152 passing) as the Eagles secured a 2-0 start in hostile Indianapolis territory.  More impressively, 148 of his receiving yards were after the catch.  Basically, he was flipped the ball and turned the Colts defense into a video game.  Sproles has been doing this for 9 seasons...the 0-2 Saints are answering some tough questions as to how they let him go.
Posted by longhorndave at 11:35 PM No comments:

Another weekly loss for Ewing Oil.  But plenty of time to make it up.  Or maybe you're thinking "just bet opposite of this guy and I'll win."  Bad plan because I've learned the error in my ways!

Just one good week from popping this thing in the green.

So who do I like for Week Three?  Here are the J.R. Ewing picks!

West Virginia (+3) at Maryland
Not just the good showing against Alabama, West Virginia is a high flying, no fear team.  They've got athletes and the game in College Park isn't too far a drive for the Mountaineer faithful.  Given a few points, I'll take 'em.

Duke (-14) vs. Kansas
Bill Self will have his guys ready, even if Andrew Wiggins is gone.  Wait, what? Oh football? Kansas is probably the worst team from a so called "Big 5" conferences.  Duke can put up points and will want to make a conference statement.  Two TDs is a breeze.

Texas Tech (PK) vs. Arkansas
Tech is a middling Big 12 team vs. a bottom SEC team.  The conferences aren't that disparate.  Plus Tech at home on the West Texas plains can be tough.  Coach Kingsbury will have his team ready for a win.

Penn State (-3) at Rutgers
Rutgers has been average vs. teams that they should have beat by more.  Penn State is riding some bowl-eligibility momentum, as well as Christian Hackenberg at QB.  Penn State fans will travel well in this Big 10 matchup.  And cover the 3.

Straight up special
Texas-San Antonio (+420) at Oklahoma State
UTSA has played two solid games, blowing out Houston and staying right with Arizona.  Oklahoma State lost their QB for the first two-thirds of the season and are starting someone green.  The money line is juicy here, worth a play.

Good luck to all bettors this weekend! 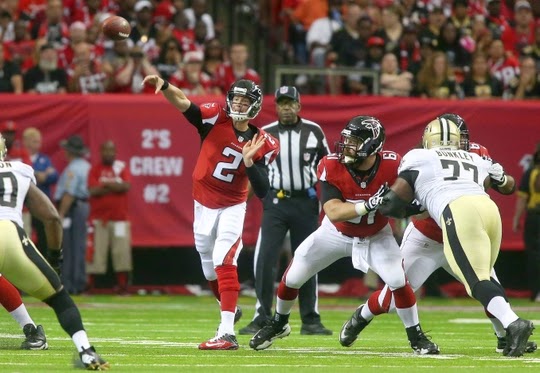 The sports world celebrated the return of NFL football on Sunday.  The Atlanta Falcons pulled off one of the biggest upsets of the week, knocking off what many consider a Super Bowl favorite New Orleans Saints.  But it took veteran QB Matt Ryan's 448 yards on a 31/44 through overtime to beat their division rival 37-34, out-dueling Drew Brees.  Throw in three TDs and no INTs and we have a player of the week.  From 13-3 in 2012 and NFC runners up to 4-12 in 2013, not many experts had the Falcons as a contender in the NFC South.  Those experts better look at game film.
Posted by longhorndave at 8:21 PM No comments:

Kansas State (-12) at Iowa State
Iowa State is not good.  And they lost their best lineman this week.  Bill Snyder is a great coach, always gets his team up on the road.  They are ranked against one of the worst teams in FBS.  This should be 22 and I'd still take the Cats.

Vanderbilt (+19.5) vs. Ole Miss
Is Ole Miss really a near 3 TD favorite in an SEC road game?  Is Vandy that bad (horrible loss to Temple).  I'm betting that Vandy bounces back now that they realize they have to buck up, and Ole Miss isn't really that good (struggled to put away Boise, never looked good). Give me the points!

Michigan State (+13.5) at Oregon
Sparty won the Rose Bowl last year.  That means they were the best team in the Big 10 or Pac 10.  Oregon looks so good, but hasn't played the same since Chip Kelly left (Alamo Bowl last year.  Alamo).  I'm not saying State is going to win, but they'll keep it close.  Easy cover.

Ohio State (-12) vs. Virginia Tech
Fans are down on Ohio State after an unimpressive win vs. Navy (BTW, they were close to a cover).  Virginia Tech has never been the same since the mid-2000s.  Just lackluster.  The horseshoe and Urban Meyer has them covering two TDs easy.

Straight up special
Northern Illinois (+230) at Northwestern
See above, I see a win here for the Huskies in Evanston.  Northwestern just hasn't showed me much.  NIU is always good.  Worth the gamble!
Posted by J.R. Ewing at 9:00 PM No comments: 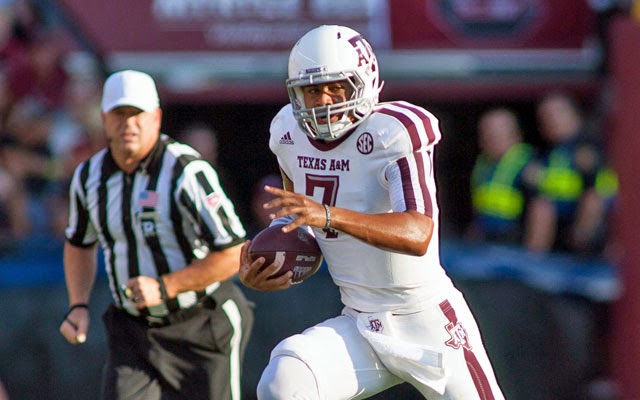 It's football season, at least college started and there were a number of new, instant superstars abound.  None set the nation on fire more than Texas A&M's QB Kenny Hill.  Playing in literally the first game of the year (Thursday at 6 EDT), the freshman Hill torched a Top 10 South Carolina Gamecocks defense for 511 yards (!) and 3 TD, breaking the single game yardage school record by his predecessor, Heisman Trophy winner John Manziel.  He found 12 different receivers, going 44-60 (might as well have been throwing against air).  The Aggies racked up 31 points in the first half, and another 21 in the second easing to victory.  On the road.  In the SEC.  He is a new star in college football, and our Longhorndave Sportsman of the Week!
Posted by longhorndave at 9:38 PM No comments: