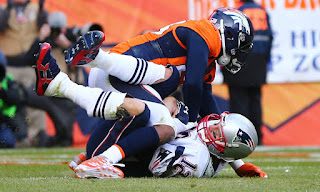 Another weekend dominated by Championship football and an underdog team crashed the Super Bowl Party.  Denver Broncos LB Von Miller played like a man possessed and obsessed...obsessed with knocking around New England Patriots QB Tom Brady like he was a pinata.  Miller tormented the Patriots Offensive Line, running backs, and most of all, Brady.  He ended with 5 tackles, 2.5 sacks, 1 pass deflection, 2 tackles for loss, 4 QB hits and an interception in Patriots territory.  Now that's filling up a stat sheet.  When he didn't make the tackle or hit, he was drawing double and triple teams to allow his teammates to shoot gaps and completely disrupt the Patriots offense, which was held in check all night.  Miller's individual play gives him our Sportsman of the Week!
Posted by longhorndave at 8:21 PM No comments:


Sticking with favorites Straight Up has paid off so far, not as much on the ATS or O/U.  The second week of playoffs was a near push, but after missing all three elements on the first game (had the Chiefs winning and the under), went 2-1 each on the next three games.

According to reports, a lot of money is going on the Patriots in this one.  Some lines are 3.5 but the consensus was 3 points.  Brady and company looked impressive on both sides of the ball against Kansas City, but remember how hard it is to win on the road in the playoffs (lest us not forget the rare air either).  Denver's defense is still underrated (Patriots D probably is, too).  The Broncos offense looked rusty last week with Manning at the helm, but I still see a low scoring victory here.  The Patriots have lost their last two road games, coughing up home field down the stretch.  For all the grief Manning gets, this could be his second AFC title in 3 years in Denver.  My only hesitation is that the coaching matchup is huge for Belichick; not sure Kubiak is up to matching wits.  I still think the Broncos move on.

This one seems way too close on the books than it should be.  Again, the Panthers are 16-1, simply one of the best records in recent memory.  They're at home against a warm weather team in cold weather.  The Cardinals muddled their way to victory last week against a mediocre (by Packers standards) opponent.  Carson Palmer looked very shaky and this defense is much better than last week's opposing D.  The Cardinals might have left all their emotion on the field after the see saw finale.  I don't see the Cardinals getting a running game going against the Panthers front seven.  Carolina meanwhile can score on the ground, through the air, or just letting Newton do his magic.  Do not fret about the second half letdown last week, remember that was a Seahawks team that was the best defense in the league and almost a pick'em game.  This matchup is very strong for Carolina, easy win here. 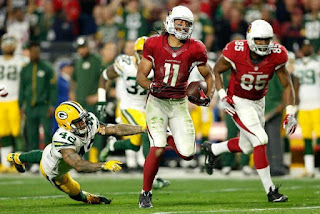 The NFL playoffs took center stage last weekend, and a veteran wide receiver stole the show.  Arizona Cardinals star Larry Fitzgerald resembled his younger self in dominating a thrilling game with two big catches in overtime to thrust his team to the next round.  In total, Fitzgerald ended with 8 catches for 176 yards and the decisive 5-yard TD in overtime to defeat the Green Bay Packers.  But it was his 75 yard catch and run as the first play in overtime that tilted the contest.  The catch was only made necessary after an improbable hail mary pass by Aaron Rodgers tied the game with no time left.  In what was the best game of the weekend, our Sportsman of the Week was the deciding factor.
Posted by longhorndave at 11:05 AM No comments:

Off to a good start with Week 1 picks.  Slight profit (more in a minute).  Picking all four winners was key, while not doing too badly on the ATS and O/U.  I definitely got this week nailed.

To recap, each week of the NFL Playoffs, I'll preview the games, predict final scores, and keep track of my overall (certainty) winnings straight up, ATS, and O/U on each game.  For ATS and O/U, $110 is the Wager.  For S/U (a.k.a. Money Line), it's $100 on the underdog, or the money line value on the favorite.

My approach is pretty simple.  Look at teams home/road performance.  Look at the last streak of games.  Look at record against playoff teams (everyone can beat Titans and Browns).  And look at their health.  Most of the teams are relatively even when it comes to W-L record.  The week one theme seems to be perceived stronger teams playing weaker division winners at their house.  And all are favored.

This is a very intriguing game to pick, because you have the hottest team in the NFL in the Chiefs vs. a suddenly ice cold Patriots squad.  But the Chiefs have no recent postseason success (beyond last week) and the Patriots have the most of any team in the last decade and a half and a QB that's been there the whole time.  I'm going out on a limb and venturing to the Chiefs.  Noting the lack of quality competition when the Patriots ran up the 10-0 record (just one playoff team faced).  And two losses to inferior opponents in their final two contests to give away home field.  It's just not their year with the injuries mounting up.

These two teams faced off in Week 16 in which the Cardinals dismantled the Packers.  Green Bay was impressive last week, but against an inferior Redskins team.  The week off for the Cardinals (which was needed after an ugly finale against the Seahawks) will do well to clear the Cardinals, this will be an easy coast to victory for the Birds.

Another intriguing one, given you have the defending NFC Champions against the far and away best NFC team this year.  While the Seahawks have been hot lately and great on the road, remember they were one missed field goal away from being home. I can't go against the best team in football at home, especially on home field.

Pittsburgh may have left it all on the field in Cincinnati last week, including their star wide receiver and starting QB.  As goes Roethlisberger, as goes the Steelers and I don't see them mustering enough offense against a stingy Broncos defense.  You also have Peyton Manning returning to the starting role, much more well rested than in previous years.  This should be a breeze for the Broncos.


If I had to pick the three "best bets" it would be:
Panthers: ATS
Panthers vs. Seahawks (under)
Cardinals: ATS
Posted by J.R. Ewing at 10:24 PM No comments: 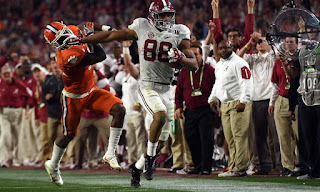 Rules are made to be broken so I'm breaking one this week.  Normally our Sportsman of the Week is Monday through Sunday, but I'm going to reward an epic Monday night performance that just can't wait.  Alabama Crimson Tide tight end O.J. Howard snagged just five passes, but for an astounding 208 yards and 2 touchdowns in an entertaining 45-40 Alabama win in the College Football Playoff Championship Game.  The underutilized weapon had topped out at 70 yards in a single game during the season, with under 400 yards total and zero touchdowns.  Both touchdowns broke up ties and seemed to be body blows to the stubborn Clemson Tigers who kept coming and coming.  And the end, Howard was the difference, and he is our Longhorndave Sportsman of the Week!
Posted by longhorndave at 9:50 PM No comments:

We're not going to talk about the disaster that was the NCAA College Football Bowl Game picks.  You have to try to be so bad to be 1-9 in relatively 50/50 bets. Burn the tape.

The NFL playoffs are ripe for betting and I'm never one to turn away. Each week of the NFL Playoffs, I'll preview the games, predict final scores, and keep track of my overall (certainty) winnings straight up, ATS, and O/U on each game.  For ATS and O/U, $110 is the Wager.  For S/U (a.k.a. Money Line), it's $100 on either side.

My approach is pretty simple.  Look at teams home/road performance.  Look at the last streak of games.  Look at record against playoff teams (everyone can beat Titans and Browns).  And look at their health.  Most of the teams are relatively even when it comes to W-L record.  The week one theme seems to be perceived stronger teams playing weaker division winners at their house.  And all are favored.

You cannot argue that both these teams are not extremely hot entering the postseason.  In their last 20 games combined, they are 17-3 (all losses by Texans to Patriots, Dolphins, and Bills ).  The Texans, however, have allowed 9 or fewer points in six of their last nine games.  The Chiefs 10 game winning streak only featured two playoff teams, the other five they faced were in the first six weeks (1-5, lone win against Texans).  Chiefs won the season opener 27-20, it's be tighter and more low scoring but the Chiefs move on.

This is one to watch the health of Dalton, because it doesn't seem plausible that the Bengals can without their mainstay QB (see last eight games record).  The Steelers have been hot (minus a mulligan loss to the Ravens) and are playing with house money after the Jets lost a game to offer them a Wild Card spot.  If Dalton plays, who knows whether he can be effective, so it seems that the Steelers got this one.

I look no further than the Seattle Seahawks hot streak to settle this one.  Only loss in the last 7 games was a mulligan against the Rams.  Most impressive, in their last five road games in defense points allowed (3, 12, 7, 6, 6) and they're facing a green playoff quarterback.  In their last three road games, they've scored 35 points or more.  The Vikings have been average in their last 7 games, and against playoff teams only wins against the Packers in the finale and Week 5.  The Seahawks are battle tested and they may be getting Lynch back.  Weather is supposed to be bad, but neither of these teams need ideal conditions to throw the ball all over the place.

It is tempting to look at the Redskins four game winning streak against a reeling Packers team and go with the home team. But then you look at their schedule and realize how soft it was.  Two playoff teams faced (Patriots and Panthers) with an average score of 35-13.  That leaves 7-7 against non-playoff teams, talk about average.  The Packers lose to playoff teams but can handle softer foes.  They'll roll pretty well.

If I had to pick the three "best bets" it would be:
Seahawks: ATS
Chiefs vs. Texans: Under
Steelers: ATS
Posted by J.R. Ewing at 10:36 PM No comments: 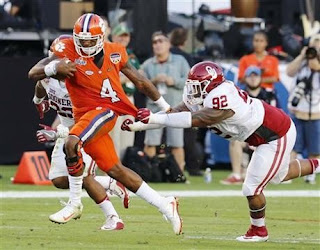 A new year, and sports isn't slowing down at all.  With College Football and NFL at the penultimate stage and NBA, NHL, and college hoops swinging into their critical stretches, it's a great time to be a sports fan.  The college football playoff is simply one of the highlights of the sports year, and our Sportsman of the Week headlined an upset.  Deshaun Watson led the undefeated and top seeded Clemson Tigers to a demolition of the Oklahoma Sooners by a score of 37-17.  Watson lead a running attack that totaled 312 yards with 145 on his own, then threw efficiently for another 187 yards.  Whatever Watson wanted to do, he made it happen.  The second runner up for the Heisman gets his Tigers a shot at their first National Championship in over 30 years against the Heisman winner.  I wouldn't doubt him!
Posted by longhorndave at 8:40 PM No comments: