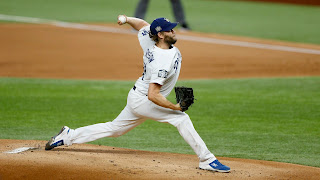 The Los Angeles Dodgers continue to tear through the MLB Postseason and another hero emerges.  One of their best franchise players. Clayton Kershaw, despite those who feel his postseason performances have not been up to par, won two critical games in the World Series to edge his Dodgers up 3 games to 2 over the Tampa Bay Rays.  He won pivotal Game 1 with 6 IP, 2 H, 8 K in victory to send them to a 1-0 lead, then responded with a gutsy performance (5 2/3, 2 ER, 6 K) to win Game 5 to again push the Dodgers ahead.  This time, they need just one more game.  After coming up short in the World Series in two prior appearances, this may be the Dodgers year.  Heavy favorites after a dominant regular season, along with a loaded lineup and arsenal of arms in both starting and relief roles, this is their best chance to win a Series since the 1988 season.  And their ace set them up.  The Longhorndave Sportsman of the Week!
Posted by longhorndave at 8:48 PM No comments: 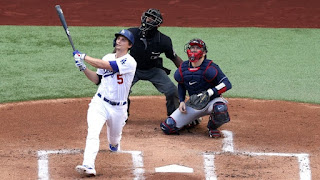 What a week of League Championship Series action in MLB and there were two strong MVP candidates to present the weekly Sportsman of the Week.  But one guy wasn't the best only of the week, but ever.  Corey Seager of the Los Angeles Dodgers raked for 7 straight games and left the Atlanta Braves in his team's dust.  Including winning the last 3 games to get to the World Series for the 3rd time in 4 years.  Seager finished 9-29, but 9 of those hits left the field.  And even more amazing, 11 runs knocked in.  Capitalized on his opportunity.  Can Seager and his Dodgers finally break through in the World Series?  Tune in the next week.  Seager secured the NLCS MVP and is our Sportsman of the Week!
Posted by longhorndave at 9:29 PM No comments: 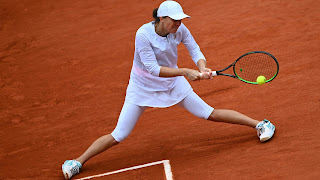 The recovery of the sports world continues, this time with the French Open...in October.  And while the Gentlemen's side of the bracket went predictably, the Ladies' side most certainly did not.  Roaring through some of the biggest names in the sport, Poland's phenom star Iga Swiatek could not be slowed down.  Like not even a dropped set.  Not even a tiebreak.  Only once after the second round did an opponent get as many as four games against her in a set.  And that was in the finals against upshot fourth seeded American Sofia Kenin.  At 19 years old, the unseeded Swiatek (ranked 54th in the World) became the youngest to win at Roland Garros since legend Monica Seles in 1992.  Easy to guess she might not be done winning big championships.  A legend to watch and the Longhorndave Sportswoman of the Week!
Posted by longhorndave at 7:03 PM No comments: 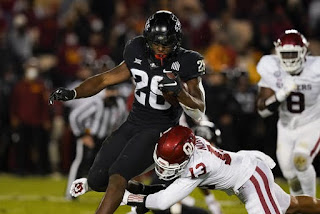 The Oklahoma Sooners were poised for the College Football Playoffs again in 2020, but this year has not been kind to them.  After a home loss to an overmatched (skill wise) but underestimated (coach and heart-wise) Kansas State Wildcats, the Sooners strolled into Ames, Iowa thinking time to right the ship.  The ship may be sunk.  The plucky Iowa State Cyclones love to get the big teams at home at night.  And using a power football mentality, bullied the bully Sooners and sent them back to Norman with a second straight Big 12 loss.  Their effort was no more personified than the yeoman like work of sophomore tailback Breece Hall.  Toting the ball 28 times for 139 yards and 2 TD.  Iowa State only threw it 25 times.  Tied at 30, he carried the ball twice for 36 yards, then 8 yards to give Iowa State the 37-30 lead they would not relinquish.  Hall may just lead Iowa State to a surprise Big 12 Title game appearance, but certainly remember the name.  Our Longhorndave Sportsman of the Week!
Posted by longhorndave at 9:10 PM No comments: