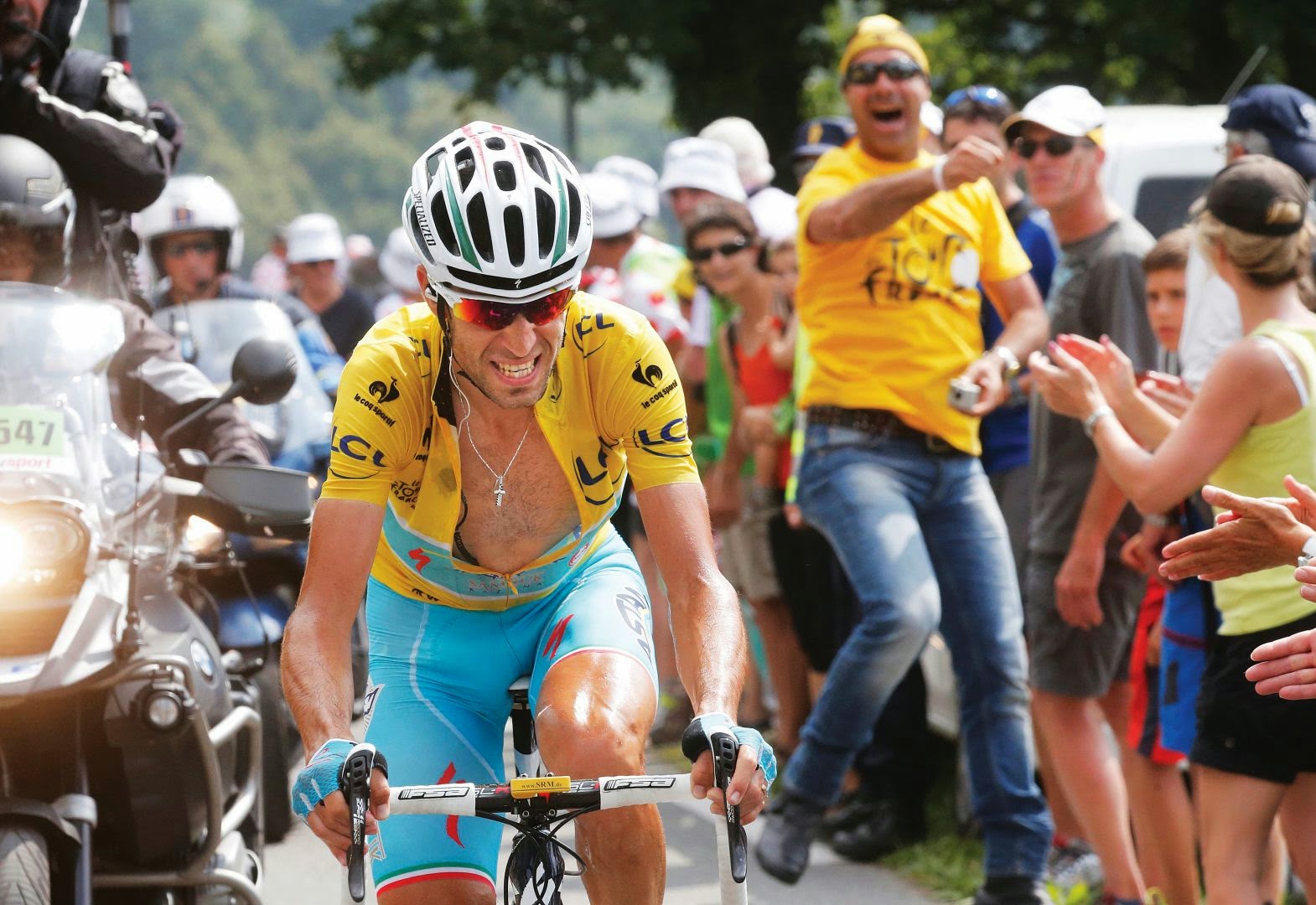 In what was supposed to be a wide-open Tour de France General Classification competition, this week's Sportsman made it look easy.  Vincenzo Nibali (ITA) was the first to make his mark on the Alps mountain stages, then punctuated an easy (7+ minute) victory by dominating the remaining competition in the Pyrenees.  One by one, main competitors either crashed out (Chris Froome, Alberto Contador, Andrew Talansky) or couldn't keep up (Tejay Van Garderen, Alejandro Valverde, Richie Porte).  Not only that, he also finished fourth in the Time Trial, not his normal discipline.  Never looking stressed, he managed to win four stages throughout the tour (2, 10, 13, and 18), coasting ahead of French riders Jean-Christophe Péraud  and Thibaut Pinot who finished second and third respectively.  Taming 2,200 miles over two mountain ranges and nearly lapping the competition, Vincenzo Nibali is the Longhorndave Sportsman of the Week!
Posted by longhorndave at 4:23 PM No comments: 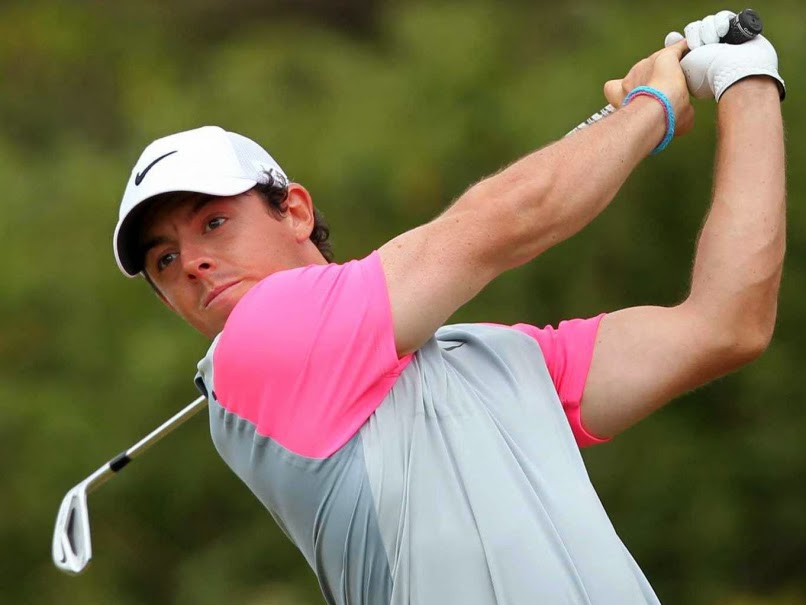 There may be an heir apparent to the likes of Palmer, Nicklaus, and Woods and he demonstrated his prowess this week at The Open Championship in England.  Briton Rory McIlroy once again showed all the tools that have many golf analysts thinking "how does this guy not win more?"  McIlroy displayed a consistent 66-66-68-71 (all under par) to register his third major (in three different events) before the age of 26.  McIlroy never seemed flustered, his higher score on Sunday was more a product of simply needing to register pars and the occasional birdie rather than attack.  And he won by two strokes. The Masters remains the one major he hasn't won (finished Top 10 this year).  He will be a top 3 favorite (if not the favorite) next year in Augusta.
Posted by longhorndave at 8:41 PM No comments:

Looking back four summers, one of the most controversial free agent moves in any sport was executed by then Cleveland Cavaliers forward LeBron James.  Stringing along several teams, he decided to make his Decision one of public record.  Being aired on ESPN for 30 minutes.  Despite promises to the contrary, the episode (literal and figurative) drug out for 25 minutes before he shamelessly surrounded himself with youngsters, then declared he was leaving his home state and the team that invested their number one pick in him, for a quick title fix in Miami, joining an already winning team and two superstar players.  It was a cop out.  I was fed up with the process, swore off the NBA, and realized that it can be a sham when players just decide who joins who to win, vs. loyalty to a hometown team.  Mind you, I'm neither from Cleveland or Miami or really a big NBA fan.

Now let's fast forward four years and analyze what has happened.  In the four seasons LeBron played for the Miami Heat, the team averaged 59 wins per season (if you assume 82 games and their winning percentage), won four Eastern Conference titles, and two NBA Championships.  They rendered the other 14 teams in the East as the Harlem Globetrotters do to the Washington Generals.  Mind you, those teams and the NBA collected all their revenue for playing in a fixed scenario.  Only strong teams from the Western Conference could split four NBA Finals, with all opponents coming from the Texas/Oklahoma corridor.

And now, in case you hadn't heard (because you're an alien), LeBron goes back to the Cleveland Cavaliers.  The announcement of "The Decision #2" was relagated to an essay.  Followed by a surprise deal for only two seasons.  With a verbal commitment that he is a Cavalier for life.  Should we believe him? Yes.  He played the system.  He and the Cavaliers benefited.  And here's why.


1) The Cleveland Cavaliers were better off.
How can I say that!?!?  They went from averaging 64 wins in LeBron's last two seasons there, to 64 wins total the next three years!  One answer.  Draft picks.  LeBron quickly realized that finishing way out of the lottery he would never get a high draft pick sidekick to play beside.  So he had three choices.  Recruit a top free agent to Cleveland, join other stars somewhere else, or keep not winning titles.  He opted for #2.  Don't knock the recruit thing, Kobe recruited Shaq, Jordan recruited Rodman, Pierce recruited Allen and Garnett.  He just felt like he needed to go somewhere else.  Had he stayed on the Cavs, they would have been just good enough to NOT get any impact draftees.  But probably not that much better without a big free agent (or probably 2 or 3).  Meanwhile, after The Decision, the Cavaliers, mainly due to their ineptitude with LeBron, have added an unprecedented five picks within the Top 4 of the last four drafts.  That's five very young and talented players.  To go with James, who is still just 29.

2) LeBron had to win a title sooner than later
Today's media and fandom put way too much emphasis on a title.  Is Dan Marino not a good QB b/c he didn't win one?  Is Jim Kelly no good because Scott Norwood couldn't make a field goal?  Is Tony Gwynn lousy because he never had any star players around him?  No, no, and no.  LeBron is the best player of this generation (debate ever) but somehow the media and fans still say he hasn't won enough titles.  They put up memes with MJ, Kobe, Magic, Bird and all their rings.  Those guys played with superstars.  LeBron's sidekick in Cleveland was Mo Williams and Anderson Varejao.  Seriously.  So if those are the rules, LeBron will play by them.  Add Chris Bosh and Dwyane Wade (two All-Stars, but not mega superstars) and he dominates.  Two titles out of four is nothing to sneeze at.  That threesome was no more stacked than Bird/McHale/Parish, or Magic/Worthy/Kareem, or Jordan/Pippen/Rodman (or even Grant).  He realized "I have to win a title, and this is the way I can do it.  Now."  Well played.


So now LeBron finds himself on the team that drafted him, his hometown team, and positioned to win those titles "on his own" that he gets so much criticism for not doing.  Both sides needed a break and they're both better off for it.

The downside was the fans.  Cleveland fans felt stung by his departure.  Fans have loyalties to teams for their entire life, players until their next contract is up.  It didn't feel right.  LeBron had no ties to Miami.  It was cheap and they felt used.  Now it's Miami fans that are hurt.  He used the franchise like toilet paper.  Got his titles (and legacy) and ran.  Now they're stuck with a Chris Bosh (and maybe Dwyane Wade) led team that won't come close.  In today's NBA, you can't get by with only two superstars.  Because somewhere else, three guys are joining forces.


The NBA also loses in all this.  Fans like to see great players play together, but the league needs thirty healthy franchises.  And they have about 4 that could win a title any given year, another 4 or 5 that might make a run.  And 21 who are just a joke.  Because they don't have any player like those aligning at the top.  Why even bother in Phoenix or Minnesota or Charlotte or New Orleans or Utah.  Unless superstars happen to converge on your city.  Just pay your dues and let the other big markets (LA, Miami, New York, Chicago) dominate.  At some point it won't be fun anymore.

LeBron James will go down as one of the Top 3 to 5 players in history.  Amongst the Jordans, Magics, Birds, maybe Kobes, and lots of big men.  He played his hand well.  He went down in chips after The Decision, but it was all worth it in the long run.  I went from cheering him to win in Cleveland, to hoping he'd lose in Miami.  But he has made good in coming back.  And doing it with a team full of guys who haven't won before.  He can now lead HIS team.  And we'll see if it results in more titles than in Miami


Posted by longhorndave at 9:07 PM No comments: 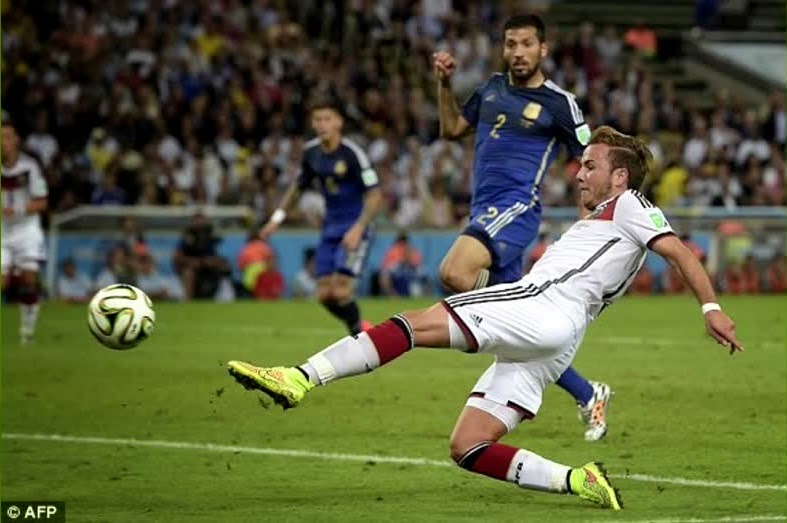 Third week in a row we go to the World Cup, but why not, it only comes every 4 years.  And there was one game that really mattered, the World Cup Final on Sunday.  After 110 minutes of (a relatively exciting) 0-0 stalemate (no really, there were lots of opportunities), Germany's Mario Gotze broke through with a beautiful goal. On the center pass, he settled with the chest, then pounded with the left foot.  Argentina goalkeep Sergio Romero had no chance.  And Super Mario was the hero of a nation who hadn't won a Cup in 24 years.  And our Sportsman of the Week!
Posted by longhorndave at 6:57 PM No comments: 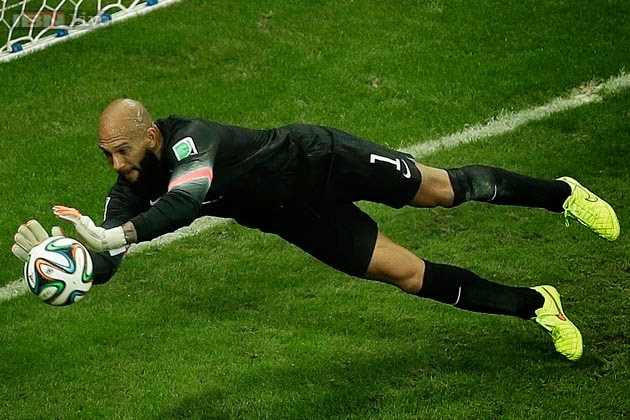 By my count, this is only the second time in blog history we've awarded the Sportsman of the Week in a losing effort.  But sometimes, when a player puts his team on his back and still comes up short, it's worthy.  The United States Men's National Team (#USMNT) put forth a valiant effort in the 2014 World Cup, but couldn't quite crack the Final 8.  But not for the effort of goalkeep Tim Howard.  Howard put forth 16 brilliant saves in a 2-1 loss to a persistent Belgian team.  The game was scoreless after the first 90 minutes, then the peppering was too much in extra time.  But the effort is definitely worthy of a nod from our Blog as Sportsman of the Week!
Posted by longhorndave at 9:08 PM 1 comment: 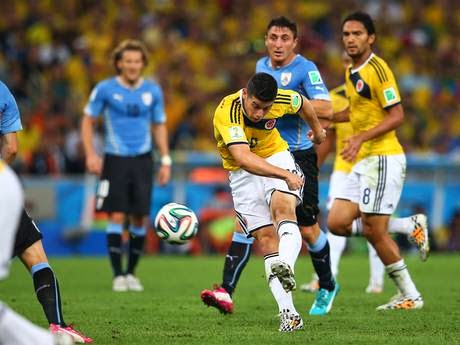 World Cup fever has spread throughout, well, the World.  With so many teams and infrequent games, it's difficult to put one player in the spotlight, but I think we've found a deserving one.  The name on the back of his jersey resembles and American sports icon.  "James".  But that's just his first name, Rodriguez is his last name.  And the 22-year old Colombian has quickly become the superstar of the tournament.  Last week, he scored 3 goals in two games (with two assists) as Colombia has surged into the quarterfinals.  His two-goal performance against Uruguay (a 2-0 win mind you) included a "golazo", a spectacular control of a pass to his left foot and a rocket.  He's scored in every Colombian game so far.  James Rodriguez, you are the next great thing in soccer, and you are the Longhorndave Sportsman of the Week!
Posted by longhorndave at 9:46 PM No comments: