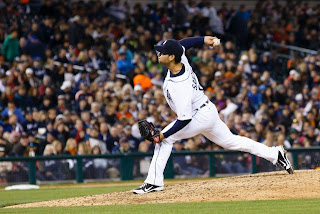 Another week, another pitcher as Anibal Sanchez put on an amazing display of missing bats and set the tone for his team to win a key weekend series.  Sanchez struck out Tigers record
17 Atlanta Braves on Friday night in only 8 innings, technically having a chance to tie Roger Clemens and Kerry Wood's single game record had he come out for the 9th. In the process, lowering his ERA to a microscopic 1.34.  He didn't, but he nearly single-handedly turned around a team that had lost 5 of their last 6, into a team that has now won 4 straight and is on the rise for a presumable AL Central title. For now, Anibal Sanchez will have to settle for Longhorndave Sportsman of the Week!
Posted by longhorndave at 10:15 PM