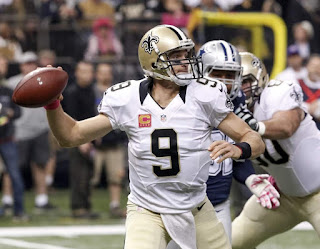 In desperate need of a win, the New Orleans Saints venerable quarterback Drew Brees stepped up.  Having missed Week 3 with a bad shoulder, he was uncertain to play on Sunday Night Football against the Dallas Cowboys.  But play he did, and perform he did.  In a thrilling overtime victory, Brees went 33-41 for 359 yards and 2 TD.  The last 80 yards were the most sweet, as he ended the overtime affair with an 80 yard pass and catch with speedster C.J. Spiller.  The previously winless Saints really needed his heroics after missing a short field goal to end regulation.  Brees stepped up and willed his team to victory.  For that, he is the Longhorndave Sportsman of the Week!