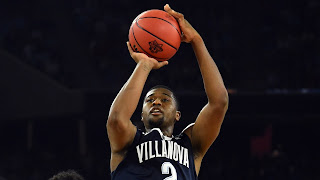 There's a seldom exercised rule in determining the Sportsman of the Week that if you made a clutch play that will go down in the annals of history of your sport, you probably get the nod.  Villanova's Kris Jenkins gets the nod.  In what some are calling the best NCAA Finals game in history (okay, media, slow your roll), Kris Jenkins made the world stop and realize they just saw greatness.  After North Carolina's Marcus Paige made what can only be called a circus shot (double clutch from the hip) three pointer with 4.7 seconds to tie the game at 74, Villanova calmly moved the ball down the floor and Jenkins was ready to etch his name in history.  The Junior knocked down the 3-pointer with a release at 0.5 seconds, the bottom of the net with the red light on.  Villanova 77, North Carolina 74.  It should be noted, he was a great player all weekend, with 32 points (12-21 from the floor) and 10 boards in the Final Four in Houston.  Foul trouble limited him to just 21 minutes in the final game.  But it was the Jenkins dagger that will forever be remembered.  And he is immortalized as the Longhorndave Sportsman of the Week*!

* Sportsman of the week usually ends on Sunday, this week, we include Monday
Posted by longhorndave at 6:01 PM