Does the new National Baseball Hall of Fame Committees Change Everything? 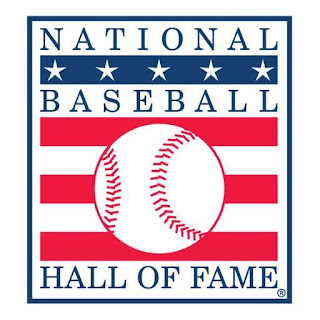 In July 2016, the National Baseball Hall of Fame (NBHOF) made a significant announcement with regard to induction, the impact of which is beginning to be understood.  Whereas previously candidates who fell off the primary ballot seemed doomed to probably never see enshrinement in their lifetime (e.g. Ron Santo), that is now changing.  The NBHOF has essentially added its own "hooks" to enable a much broader membership, if the recent selection of Alan Trammell and Jack Morris to the NBHOF Class of 2018 is any indication

Historically, the NBHOF has its primary ballot as an induction mechanism, in which identified (well above average) players who were five years removed from their final game are placed on a ballot in which the members of the Baseball Writers' Association of America (BBWAA) could vote for up to ten candidates for induction.  If any candidate received more than 75% of the vote, they would be inducted among the greatest in baseball into the NBHOF.  Any candidate not receiving at least 5% of the vote, would not appear on the ballot the following year.  A candidate could remain on the ballot for 10 years (reduced from 15 years in 2014) before they would also be removed (and likely never elected...that appears to be what is changing).  A player currently banned from baseball was also not eligible at any point.  This vote was one of the most scrutinized in sports and especially now as former players associated with Performance Enhancing Drugs were making their way to the ballot, it is also the most controversial.

Adding to the controversy was a sudden focus on the BBWAA holding the keys to the NBHOF.  Members of the BBWAA had essentially a lifetime ballot, which seemed to cause consternation for members who hadn't covered the game in decades deciding which players they never covered should get in.  Rumors swirled of empty ballots being submitted as a protest to the PED era or just out of lack of caring to do the research and take the time.  The BBWAA eventually removed members that were 10 years removed from covering the game in 2015, tightening up the pool to those who had covered the game during the era.

Outside of the primary ballot, the only remaining way for induction to the NBHOF was the Veterans committee ballot.  This ballot found its most use in recognizing pioneers of baseball in the first quarter of the 20th century as well as Negro League players, the talents of which were becoming much more known as media and researchers uncovered more information over the last half of the 20th century.  Seldom was a well known player who missed the primary ballot included on this.

This is all changing.

As of July 2016, four committees that meet on a rotating basis replace the singular Veterans Committee as follows
Candidacy based on those years as as follow (via NBHOF)


The [committee name above] Committee ("The Committee") shall refer to the electorate that considers retired Major League Baseball players no longer eligible for election by the Baseball Writers' Association of America (BBWAA), along with managers, umpires and executives, whose greatest contributions to the game were realized from the [years outlined above].

The committees themselves are made up of "16 members, comprised of members of the National Baseball Hall of Fame, executives, and veteran media members".

The committee members meet on a rotating schedule as follows (via HallofStats.com)
As noted above, the first meeting of this committee structure selected Alan "Bud" Selig and John Schuerholz in 2016 (for induction in 2017).  Both had significant contributions to the game and were widely considered strong candidates.  Schuerholz is certainly one of the greatest 1980s/90s executives (very comparable to NBHOF inductee Pat Gillick) and had little controversy.  Selig had a bit more controversy (primarily the 1994 strike and PED era), however the financial health of the league, additional playoff rounds including Wild Card, and relative labor peace after 1994 were instrumental to the growth and popularity of baseball today and got him a deserved nod.

The 2017 Modern Baseball committee has been the first to select former players.  Immediately it seems as if the whole induction philosophy has changed, as Jack Morris and Alan Trammell were selected for induction.  A uniqueness is that Morris appeared on the ballot as late as late as 2014 and Trammell appearing as late as 2016.  Suddenly, this Modern Baseball committee (as well as Today's game) seem as if they are another "catch wire for induction."  At the most basic, a chance for someone overlooked by the media to find their way in.  At the more complex, perhaps the NBHOF ability to circumvent what the BBWAA thinks.  Several NBHOF players (George Brett, Rod Carew, Dennis Eckersley, Don Sutton, Dave Winfield and Robin Yount) were on the panel that voted.  Players can now pick their peers.  Which may be a better electorate anyway, but it's a significant departure from the NBHOF historical entry criteria.

Jack Morris was incredibly close to BBWAA induction and got within 8 percent of the NBHOF vote needed.  Over 18 seasons, Morris notched over 250 wins, led the league in wins twice, finished in the Top 5 of the Cy Young voting five times, and won the iconic 1991 World Series Game 7 with a 10 inning complete game.  In his teams four postseason appearances, he won three World Series title, and was the 1991 World Series MVP.  The knock was always his 3.90 ERA (highest ever for a NBHOF pitcher) which stands about a half point higher than what some consider a minimum entry point.

Alan Trammell is a bit more of a stretch.  He never received as much as 41% of the NBHOF vote.  Meaning at no point did half of the BBWAA believe he was worthy.  Not near the 75% of affirmation needed throughout history.  The 41% was in his final year; prior to that he never exceeded 37%, below half of the votes needed.  So either he was severely under-appreciated by the media, or overrated by the 16 member Modern Baseball committee.  The truth probably lies somewhere in between.  His candidacy is explored further.

The primary ballot NBHOF (more than half their games at the position) since World War II are Ernie Banks, Barry Larkin, Cal Ripken Jr, Ozzie Smith, and Robin Yount.  The most similar to Trammell in terms of offensive style is Barry Larkin in my opinion, he will be used as a comp below along with Craig Biggio, who is also near the minimum level for a second baseman, comparable at middle infield.

No NBHOF candidacy exploration is complete without looking at numbers.  Trammell was a lifetime .285 hitter, .352 on-base percentage, .415 slugging.  Good for a middle infielder, but Hall of Fame worthy?  Barry Larkin was higher across all three (.295/.371/.444) and won an MVP.  Craig Biggio's average of .281 is considered low by Hall of Fame standards, but he did have higher on base and slugging than Trammell, and is fifth in all time in doubles (number 1 for a right hand hitter).  And most importantly, got to the iconic 3,000 hits.  Trammell ended his career with 2,365 hits, nowhere near 3,000.

When comparing to same era and position peers (which is what the BBWAA typically does for NBHOF induction), Trammell again isn't up to NBHOF members.  We'll explore All-Star games (ASG), silver sluggers (SS), and gold gloves (GG) which compares against shortstops of the same year.  Trammell achieved six ASG, three SS, and four GG.  Compare to Larkin who had 12 ASG, nine SS, and three GG.  Biggio had seven ASG, five SS, and four GG (was also noted for playing three primary positions during different phases of his career).  The great shortstops like Ozzie Smith was 15 ASG, one SS, and 13 GG.  Ripken had 19 ASG, 8 SS, and 2 GG.

So looking at those not in the NBHOF, Edgar Renteria (who Baseball Reference has as his closest comp) matches close Trammell with five ASG, three SS, and two GG.  Renteria got two votes from the BBWAA and dropped off after his initial candidacy in the 2017 vote.  Renteria finished with 2,327 hits, a .285 batting average, .343 on-base percentage, and .398 slugging.  Renteria also had almost 300 SB (compared to Trammell's respectable 236).  All a bit below, but the vote for the NBHOF is nowhere near close.  Trammell much more resembles Renteria than Larkin.

Finally, Trammell never led the league in any major statistic.  Being a batting champion or leading the league in hits or doubles can solidify a candidacy.  As an example, Biggio led the league in hits twice, doubles twice, and steals once. So what I see was a plus shortstop for eleven solid years  from 1980 to 1990, where he had all his ASG, GG, and SS recognition.  Short of Hall of Fame credentials.

I think what rubs me wrong is how quickly he turned from a sub-40% vote to the NBHOF induction.  Nothing personal, but suddenly the primary ballot is rendered near meaningless having only waited two years after that, seems almost instantaneous.  What's unclear is whether simply surviving the 10 years on the ballot would get one into the Hall.  Very few people find themselves never below 5% but not exceeding 75%.  Their candidacy simply loses momentum or gains it.  Now if you survive, you're on a very short list for the Modern Baseball or Today's Game committees.

What does the future hold?

Of particular interest is what this might mean for PED accused users.  Considering the committee is made up of baseball elite, I don't see a sudden rubber stamp for the Barry Bonds and Roger Clemens.  Unless you use the criteria of "they were good enough without it."  Hall of Famers Joe Morgan and Frank Thomas have been relatively overt in their objection to PED users.

If Trammell is the new threshold for Hall of Fame induction, then the candidacy of many that made it through the ballot the full allotment might get reconsideration.  Lee Smith, Mark McGwire, Don Mattingly, Dale Murphy, Dave Parker, Tommy John, and Dave Concepcion made the full ballot the last ten years.  Of those, I definitely think Lee Smith deserves in (whole separate argument regarding closers), and am on the fence for Dale Murphy and Dave Parker.  Mostly thinking these guys are just below criteria.

Frankly, I think the NBHOF line was in a good place without the expanded access.  Morris was so close he was touching it but there were (Earned Run Average) reasons why he fell short.  Trammell quite frankly was not as close.  Time will tell whether or not the NBHOF is trying to be more inclusive than the BBWAA is enabling or just giving due consideration to latter 20th century players on a veterans ballot similar to how they handled the first half of the 20th century.  My first taste is that it's a "you got close enough" instead of the objective criteria of the NBHOF for the first 80 years.  And I'm not sure I like it.

The NBHOF was always the most difficult to get in considering the number of players and statistical criteria it has taken to be among the best.  I don't see that changing, but the argument is weakened.  I guess everyone likes more guests at the party, but we don't want to end up where Yogi Berra once noted... 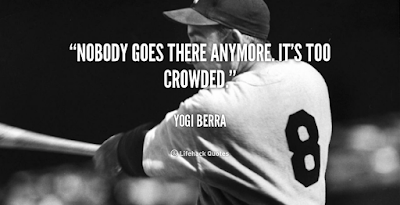 Posted by longhorndave at 11:47 AM