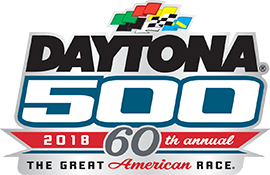 There is no weekend more exciting for NASCAR fans than the Daytona 500.  Imagine for baseball fans, Opening Day and the World Series rolled into one.  Or NFL Kickoff Weekend and the Super Bowl at the same time with all teams having a chance to win the trophy.  While not necessarily intuitive, it's makes some sense that NASCAR's biggest race is its seasons' opening weekend.  On one hand. all the cars are in their best shape in terms of wrecks and wear.  On the other hand, there is no chance for teams and drivers to get a feel for new teams, new race dynamics, and in some cases, new rules.  But it is what it is, and February 18 will kickoff the 2018 NASCAR season with "The Great American Race".  Another benefit, while much of the country is digging out from inches, if not feet of snow, Daytona, Florida, will have a high of 80 degrees and clear.  God Bless America.

For 2018, I call upon two of the most passionate, knowledgeable fans I know of in the NASCAR Blog-o-verse.  The Ladies in Black.  Meet Lexie and Kelly, founders and racing experts at the Ladies in Black Blog, which puts out great racing recaps, breaks down upcoming races, and does some insightful interviews.  While "Bulldog Babe" (Lexie from Charlotte, North Carolina @bulldogbabexo) and "Kells" (Kelly from Pocono, Pennsylvania @kellssanne) disagree (frequently) on which driver/team they want to win, they agree that NASCAR provides the excitement and thrills that no other sport does.  Just follow their Twitter accounts on Sundays (when these hard working young ladies aren't working or going to school).

We asked these two experts their thoughts for the state of NASCAR and the 2018 season.  Here are their insights.

When was the first time you got “hooked” on NASCAR?

Lexie: When I was 6. My dad had a race on and I sat down to watch, instantly got hooked.


Kells: I started watching NASCAR in 2011. I grew up around family members who were into the sport, but I never got super into it when I was younger like most fans my age did. I sat down one day with my dad who was watching a race and I just remember instantly being hooked. After that I watched almost every race since that day. I just started following the sport and it turned into a big passion. I’ve also been to every race at Pocono since my first one in August 2013, and I don’t ever intend on missing one

[Editors Note]: There's something special about a father-daughter bonding over racing

Both of you have been to race weekends before, what is your favorite part of seeing the events live and why?

Lexie: My favorite part is being able to walk around outside of the track and see all of the different things going on. I was able to get Denny Hamlin’s autograph a few years ago during the pre-race events!

Kells: It’s really hard to pick a favorite part, because the whole day is just a blast. I think for me going up to the track on Friday and Saturday and just being in the pits and meeting drivers is the coolest part. On Sundays it’s definitely just the morning before the race when you walk around and you see all the people in their NASCAR gear and you just get super excited because you realize you’re all here for the same reason: NASCAR.

[Editors Note]: Lexie is a big Denny Hamlin fan. I mean really big.  She probably cried when she got that autograph

There’s been a lot in the media about veteran drivers not happy with NASCAR promoting younger drivers with less history of success. Do you think NASCAR is right to promote younger drivers to the next generation of fans or do you think the older drivers should get more respect?

Lexie: My opinion on this is kinda neutral. I feel like the young driver promotion is necessary, but not to the point where they worship the ground they walk on.

Kells: I absolutely 100% think young drivers need to be promoted and for two good reasons. The first is that we want this sport to grow and succeed, which means bringing in more fans. This also means younger fans, considering they are the future. I think when you have younger drivers and you promote the heck out of them and their lives, it most definitely brings in more young fans. You’re targeting that younger demographic just by bringing in drivers who are relatable in age. They’re at similar points in their lives and those young fans can now maybe relate to their struggles and maybe even their achievements outside of the sport. The second reason this should be a big push for promotion is retirement of the veterans. Many drivers I grew up watching are already retired or nearing that age very soon. For example, I’m a Dale Earnhardt Jr. fan. I was also a little bit of a Matt Kenseth and Jeff Gordon fan. They’re no longer racing and for some people it’s like “What do I do now?”. I’ve even heard folks say “Well, once so-and-so retires I’m done watching NASCAR. I can’t find anyone else I like.” Advertising the crap out of a new, fresh face who is ready to take on the sport is perfect for older fans who are watching their driver near the end of their career. It’s a good fallback knowing that there is someone else out there when that time comes, because you don’t want to lose a fan when you lose a driver. That’s how you keep people in the sport. You need to promote drivers (of all ages really). That’s what hooks people and that’s how you expand on your demographic.

Did you like the Stage racing and what would you do to improve it?

Lexie: I love the stage racing! It makes everything a lot more entertaining and more on the edge of your seat. I honestly have no problem with the way it is now.

Kells: If you know me, you know I absolutely hated Stage Racing when it first became thing, before I even saw it in action. I believe I said, “this is really stupid.” I probably used some profanities in there too, cursing NASCAR for their dumb idea. Now, I’m a fan. I think it gives some races the entertainment that they lack and adds more strategy. However, just like with any new idea, I’m sure it could probably use some improvements. None that I personally could think of, but I’m sure others would love to give you hundreds of suggestions.

What driver that didn’t make the Chase last year do you think might break through?

Lexie: Erik Jones. I feel like with the transition from the 77 to the 20, he will be a lot stronger and more competitive. Furniture Row and Joe Gibbs Racing (JGR) are alliances, but I think that with the full on JGR engine power, he will be a force to be reckoned with.

Kells: Probably Joey Logano. I can’t see him not succeeding this season.

What is your favorite track and why?

Lexie: I have two favorites, Bristol and Charlotte. Bristol is a short track and it comes with a lot of action and it’s a fun track to navigate around. Charlotte is the heart and soul of NASCAR, so it makes the race day environment just that much better.

Kells: I have two favorites: Bristol and Pocono. Bristol is that track I’ve never been too but it’s on the very top of my bucket list. It’s something I feel like I just need to see in person. Pocono is my favorite because it’s my home track and it will ALWAYS have a place in my heart. The most exciting events of the summer are usually race weekends up in the Poconos with all my friends.

[Editors Note]:  I guess we can agree Bristol is tops. The second choice seems to be related to the current residence of the Lady in Black.

Lexie: I don’t like anyone on FOX, except for two people, Mike Joy and Jeff Gordon. So I prefer NBC over FOX. NBC also has cool pre race music, so that’s one of my favorite parts about the NBC broadcasts.

Kells: Oh god, I guess if I had to pick it would probably be NASCAR on Fox.

[Editors Note]:  And I thought the LiB only disagreed about drivers...

I can’t NOT ask you about the Chase Elliott and Denny Hamlin tiff. Do you think it’s all over, or we’ll see them mix it up again this year?

Lexie: I think it’s over between Chase and DH, at least. Their fans?  Maybe not.

Kells: It’s funny that you’d ask us this question because Lex is the biggest DH fan and I’m the biggest Chase fan, so it really just makes me laugh. It’s really hard to say, but I mean I really just hope it’s done and over with. I just want to focus on the new season with our new car number, and hopefully bringing home that first W (for Chase).

[Editors Note]:  Oh believe me Kells, I knew exactly who I was asking this question.

And finally, give me your top 3 finishers for Daytona?

[Editors Note]:  No Love for Danica???  So we can agree Truex Jr. in 2nd.  I'm going with Brad Keselowski, Truex Jr., then Kyle Busch

Big thanks to the two Ladies in Black.  I became hooked on their Twitter Feed and Blog last year.  If I'm in front of a TV on Sunday, you can bet I'm watching their analysis, reactions, and interacting as the race unfolds (they love to interact with fans).  Because NASCAR is America!