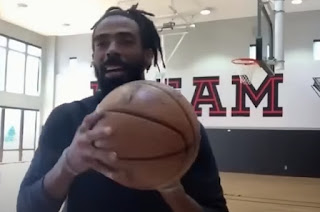 It's time to get back to American soil and sports.  And that means H-O-R-S-E.  Yes, the favorite kid's game in the driveway.  Except played by professionals.  And who came out on top?  Utah Jazz guard Michael Conley.  The 4th overall pick in 2007 schooled Tennessee hoops star and Women's Basketball Hall of Fame inductee Tamika Catchings, NBA 5-time All-Star Chauncey Billups, then current NBA star and two-time All-Star dunk contest champion Zack LaVine.  He did it with outside shots on one leg shots, and trick shots.  Just like that bully on the hard court.  In this case, everyone won because $200K was donated to charity.  But Conley will have his etch in history, and is the Longhorndave Sportsman of the Week!

Posted by longhorndave at 9:44 PM