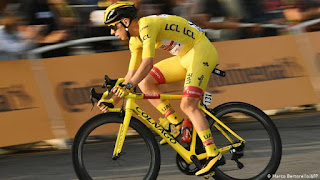 Once again, defying COVID odds, another sport had an amazing competition with an unexpected outcome.  The Tour de France, a tradition of over 100 years, slipped about 6 weeks and despite having little crowd control, managed to execute safely.  With a result nobody expected.  With favorite Primoz Roglic winning by a near one minute margin coming out of the crucial Alps stages, it was thought the final few days would be a coronation.  Oh but for the Time Trial.  Most of the Tour de France is run in packs where moves can be countered and precious seconds over rivals are hard to generate.  But the Time Trial is an event in which each cyclist is on his own for, in this case, about an hour.  And it's easy to lose time.  And lost time Roglic did.  To his fellow Slovenian countryman Tadej Pogacar (Tah-dey Po-GAH'-cha).  Pogacar reeled in his 57 second deficit and tacked on a minute advantage in winning the Time Trial on Stage 20, the penultimate stage.  He demolished the field by 2 minutes, even Roglic finished 5th out of 100+ cyclists and looked like he got whooped.  Pogacar had seemed the strongest rider the last week, but couldn't make up the time he had lost early on a mechanical failure combined with cross winds that cost him nearly 2 minutes early.  But the best cyclist won.  Oh, and Pogacar is only 21 years old (22 today, actually).  He may be the future of cycling and many more Sportsman of the Week honors to come!
Posted by longhorndave at 6:38 PM