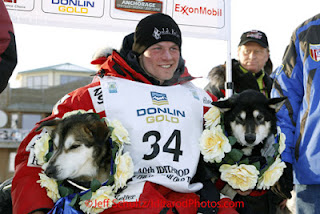 While March Madness consumed the U.S., there is clearly not one sportsman who stands above the rest, as the beauty of the NCAA Basketball tournament is in the teams and seeds. All that digested, this week's Sportsman of the Week is the winner of the 2012 Iditarod, Dallas Seavey. 975 miles of man and canine against nature, best man, woman or child wins. This time, child, as a 25 year old, Mr. Seavey is the youngest winner ever. He's a third generation musher, whose dad won the Iditarod in 2004. Congrats to Dallas, you clearly represent the tenets of the Longhorndave Sportsman of the Week.
Posted by longhorndave at 8:21 PM