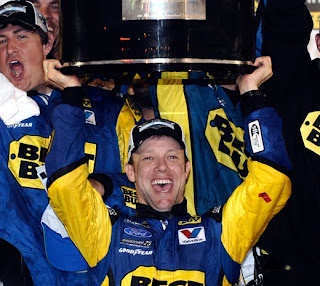 This week's Sportsman involved a bit of luck, that being the unprecedented delay of the Daytona 500 to make it this week. Of course, I'm speaking of the 2012 champion, Matt Kenseth. Affectionately known as "America's Race", it had more of the theatre of the bizarre than usual, to include the Monday start (which turned out to be a ratings bonanza), a yellow flag within the first lap and a half, then an explosion of jet fuel (courtesy of Juan Pablo Montoya) within the last quarter of the race that put the whole event back until the wee hours of the morning. Yet still, the winner of this race is a deserving Sportsman of the week, and that's what he gets!
Posted by longhorndave at 8:59 PM