As we move into the second half of the Major League Baseball season, one of the simmering stories is "What are the Nationals going to do about Stephen Strasburg."  Their management has been on record that his cap should be set at 160 - 170 innings.  Makes sense when you're a perennial second division team, but lo and behold some good draft picks and solid surrounding talent later (Gio Gonzalez signing huge), this is the best team in the NL East (talent, management, balance, etc.).

If you buy a nice house, you don't fear living in it for giving it wear and tear, that's part of the deal when you buy it.  What value is the house to buy it, then put a fence up and say "nope, not going to live there, can't risk breaking something, must live somewhere else". 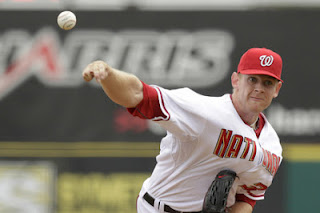 The point is, this kid is in his early prime.  His elbow is fragile, he's already had Tommy John surgery.  But you can't fear that, if he's inclined to have elbow problems, stopping at 160 innings isn't going to help.  He's going to be the next Mark Prior no matter what you do.  And in that case, you should strike while the iron is hot.  These days MLB team windows are narrow, if you don't win one year, the other teams will get enough free agents to make sure you don't contend the next (ask the Rays, Phillies, Giants, White Sox, etc.).  I can't IMAGINE being a fan of this team then being told "winning this year isn't important, winning next year and the next (without any context to status) takes precedence."

It doesn't work that way.  Win now.  Be smart, don't let him labor too much.  But let the boy pitch, he's good, your team is good, and the fans deserve it.

Posted by longhorndave at 7:26 PM