Why the Tour De France is the best sport in, well, sports

This blog loves the wider world of sports, and the Tour De France (and competitive cycling in general) certainly tickles that fancy.  Seriously, it's amazing to watch on so many levels, I'll try to break it down in a Top 10 reasons that you should be watching the Tour De France:

10. Fan Access - Where else can fans literally participate in sports?  No, seriously, fans will pass out newspapers to cyclists at the summit of climbs (which are stuffed under the jerseys as wind protection), and if your lucky enough (or really unlucky) to be near a cyclist that falls, it's perfectly acceptable to help him up, give him a push to start, etc.  Unfortunately, fans are also so close, they've been known to cause crashes. 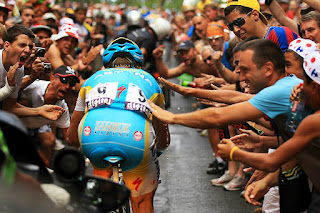 9. Scenery - I dare you to watch 3 hours of the Tour De France and not want to travel there.  The TV coverage (more on that in a minute) spoils us with helicopter views of chateaus, coastline, beautiful hills/mountains/valleys. 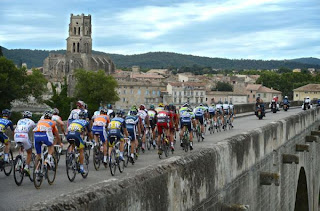 8. Peloton party - What happens in the peleton stays in the peleton.  Okay, maybe not that much of a party, but there's a camaraderie there that is matched by few situations in sports.  Teams/individuals work together, there's banter, perhaps political discussions, it's just the place to be. 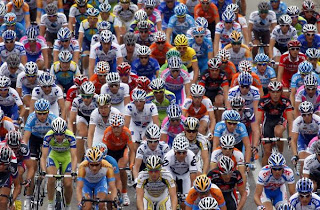 7. Drinking during the contest - Yes, on the final stage, tradition dictates that the yellow jersey sips champagne as the peloton reaches Paris.  What other sport can you literally drink while you compete and win a three week event! 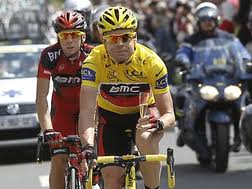 6., Variety of athlete - Like American football, these guys are stocky, slim, tall, short, lanky.  They all do something a little different than the other guy.  Andre Greipel's legs are tree trunks.  So are Mark Cavendish.  The brothers Schleck have twigs for legs.  Cadel Evans is 5'8".  Chris Froome is 6'1".  These guys are #4 and #2 in the GC at this point. 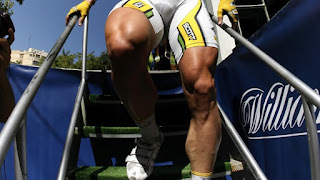 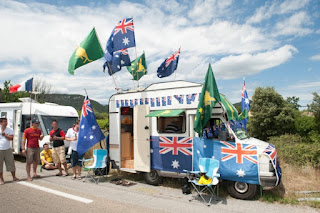 4. Team Strategy - It took me a while to appreciate this, but team composition and strategy define the winners of stages, jerseys, and overall races.  To watch the subtle teamwork of who is driving the peloton, who is best protecting their GC riders, and who is dominating the lead out train makes each day worth watching. 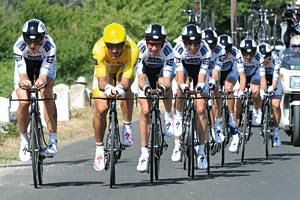 3. TV Coverage - Talk about a challenge, each course being 150 miles give or take, how do you bring the images to the fans?  France has it figured out, motorcycles, helicopters, etc., you never feel like you're missing anything.  Sure enough, there are crashes or events that don't have a camera on it (there are 200 riders, not always together, spread out over miles).  But when you watch, you see the race.  There are a lot of commercials early, not as many late, great interviews, etc.  They set the benchmark for sports coverage in my opinion. 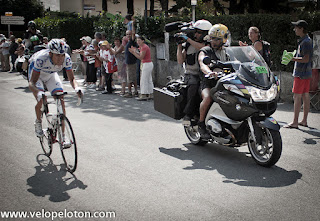 2. Athlete toughness - These guys, with little protective gear, fly at up to 60 MPH, sometimes within inches of other cyclists, with turns, rain, road obstructions, etc.  And 20% of them will break a bone by the end of the race.  Not to mention the scrapes and scratches.  And those guys continue to carry themselves over thousands of kilometers and still finish.  I can't imagine a professional cyclist not suffering a broken collarbone at some point in their career, it just goes without saying. The ultimate being Johnny Hoogerland's car bump into barbed wire. Here's a laundry list of crashes, the riders just get up and ride: http://deadspin.com/5586138/top-15-cringeworthy-tour-de-france-crashes.  See the following images, not the for the squeamish (Hoogerland's the third photo). 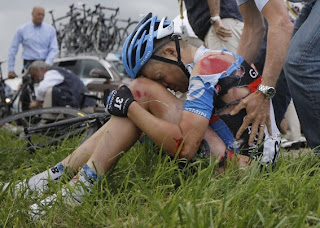 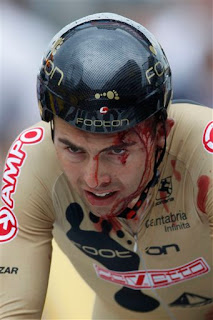 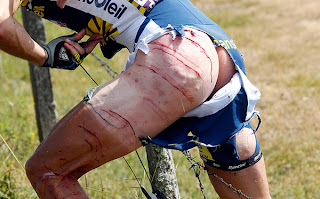 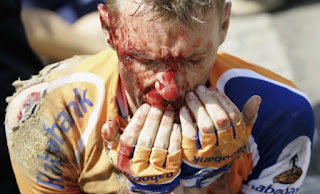 1. Pure athleticism.  Le Tour is 23 days (21 racing), these guys go 5 hours a day, over mountains, through the plains, into the wind, sometimes rain, by the end, over 2000 miles and as I said, many won't finish.  5 hours is essentially the time of two marathons for elite times, per day, every day, etc.  Over two major mountain ranges.  These guys are athletes in every sense of the word, I can't imagine any discipline requiring more work. 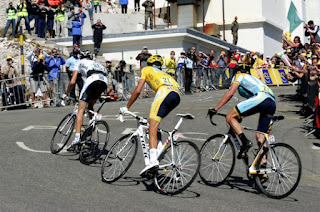 I can actually imagine myself playing football and holding my own, same with basketball.  This is one sport, I literally could not come close to competing.  Wouldn't finish the first day!
Posted by longhorndave at 11:02 PM