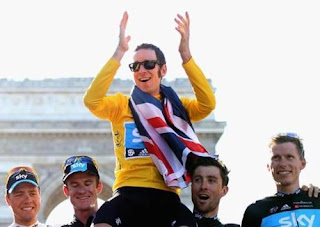 Those following my blog know I'm a big fan of competitive cycling. You can see previous posts of Longhorndave Sportsmen of the Week, tweets on @lhd_on_sports (on twitter), etc.  I more or less came around to the sport toward the tail end of Lance's domination.  I've definitely watched 10x more coverage since he's retired.  But I always had some pride that an American could do so well.  There are so many cyclists representing their country, you just needed to watch last year to see how important it was to England when Bradley Wiggins won (right).  I was extraordinarily proud of Tejay Van Garderen and the way he represented the Stars and Stripes.  But what Lance did was beyond that.  It was Babe Ruth, it was Johnny Unitas, and it was Michael Jordan sport domination in an arena that Americans were usually also rans.

But to paraphrase many who have been caught in the PED age, "the proponderance of evidence can no longer be ignored".

Specifically, he won his titles in an era in which dozens, if not hundreds of cyclists have been caught up in scandal, positive tests, and general consensus that testing was years behind practice.  This is like looking at McGwire, Sosa, and Bonds shattering records, then deciding that Sosa was probably clean but the other two were definitely guilty.  Uh, you're fooling yourself.

He didn't just win, he dominated.  Most of his wins were more or less landslides by the last few stages.  Again, not in and of itself damning, but when nobody breaks Roger Maris record for decades, then guys plus it by more than 15% in several years in a row, then you might be onto something.

There's a 1000 page report of testimony, evidence, accounts of practices.  There can't be that many people conspiring against him if he's innocent.  I admit that there are agencies and organizations that have biased reasons to bring him down.  But when teammates, former associates, etc. are involved, we have to listen. It's beyond "he said, she said"

Stepping back, I think the Tour De France (and other organization) authorities need to make a sweeping adjustment to results in these years.  Not just pick and choose who's titles to vacate.  But start with the first time it was obvious someone did it, and wipe them out through a point in which reasonable testing can account for a clean winner.  Which is probably within the past couple of years.  Most of that era had cyclists implicated or associated with scandals, just because resources weren't available to develop aforementioned 1000 page reports doesn't mean their title shouldn't be vacated, too.

And if there is a winner that never tested positive ever in his life, maybe he, and only he, should keep the title.  Wait, that's Lance.  Then wipe it.
Posted by longhorndave at 10:06 PM