On Wednesday, January 8, 2014, the Baseball Writers Association of America (BBWAA) vote for the 2014 Major League Baseball Hall of Fame will be revealed. Holding the keys to such an elite fraternity must be a daunting task. You're voting on players to proverbially sit next to Ruth, Aaron, Mays, Mathewson and the like. 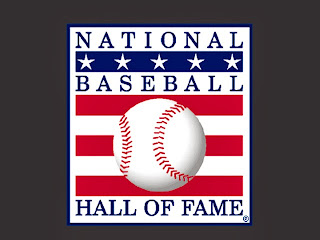 The pervasive theme the past several years remains the specter of performance enhancing drugs that infiltrated the league during the so called "Steroid Era". On the bubble now are the first generation "users", ones that presumably were clean earlier in their career but found a "fountain of youth" late which contributed significantly to jaw-dropping numbers.  Many, by all counts, were no doubt Hall of Famers before their transgressions.  But how do you handle this?  In my opinion, with little mercy.

If I were asked to vote (and of course I believe I should be), below reflects my ballot.  It looks very similar to last years' ballot, since nobody got in.  Except with the new bumper crop of first time candidates. The players on the ballots these days usually span my late childhood through young adulthood. I watched and attended a lot of games and have memories of all these players. I don't think I would be alone in allowing my personal (but not biased) "feeling" about a player influence the vote. What I mean by that is, when this player came to the plate or pitched, what was my feeling of how they would perform? Did they always seem to get the big hit, pitch their team to victory, make the heartbreaking defensive play, etc.?  Were they a feared entity anytime they stepped between the lines?

Players I would put on my ballot (in order of credibility)

1) Greg Maddux - The whisper around media circles is that Maddux "may" be a unanimous vote.  It just takes one to not vote for him so I'm guessing that won't be the case.  But 355 wins, 3.16 ERA, 4 Cy Young Awards, 18 Gold Gloves, 6 All-Star games, and a World Series Championship are a strong resume.  Probably the greatest pitcher of his generation (Clemens could argue, although his career seemed to resurge about the time he was accused of using PEDs).

Factors against him: 11-14 in Postseason play, "only" one World Series title, .610 winning percentage is middle of the pack for Hall of Fame candidate pitchers

Maddux will get in with somewhere between 92% and 98% of the vote.

2) Tom Glavine - One of three 300 win club candidates (with Maddux and Clemens), a five-time 20-game winner (Maddux only twice), two Cy Young Awards, and 10 All-Star games (more than Maddux).  He also won a World Series (with Maddux) in 1995, there just aren't a lot of holes in the resume.

Factors against him: 14-16 in Postseason play, "only" one World Series title (sound familiar).  A .600 winning percentage and mediocre ERA (as compared to other greats) at 3.54

Glavine will likely get in, I don't think that much above 80%.

3) Craig Biggio - The biggest cred Biggio brings is his membership in the 3,000 hit club.  Only Rafael Palmiero (positive PED test), Derek Jeter (still active, sure-fire first ballot) and Pete Rose (lifetime ban from the game) are members of that club, but not the Hall of Fame.  His batting average (.281 lifetime) or power numbers (291 home runs) won't wow you, but another feather in his cap is playing three (defensively challenging) positions as a regular in his career (C, CF, 2B).  He also has seven All-Star nods, three Top 10 MVP finishes, and four Gold Gloves.  Finished his career 5th in doubles all time.

Factors against him: Ordinary batting average, playing in a small market, lack of postseason success

There may have been some that didn't vote him first ballot in principle, with 68.2% of the ballot in his debut, he's likely to get the nod right near 78%.


4) Mike Piazza - He is probably the best power hitting catcher in history not named Johnny Bench.  He smacked 427 career home runs and a .308 batting average while playing all but 70 games behind the plate.  Both those numbers far exceed Bench (albeit in a different era).  He played in 14 All-Star games (over a 15-year span) and finished in the Top 10 in MVP voting seven times.

Factors against him: Perceived use of PEDs, below-average defensively

Piazza got 57.8% of the vote in his ballot debut, with the PED suspicions, I don't expect that to bump up significantly, his numbers are clearly worthy, those voting against PEDs won't budge.

5) Frank Thomas - The Big Hurt was big when he came into the league, and wasn't just about power, with a career .301 average.  I mention big when he came into the league, because he's largely escaped any PED accusations (and even criticized heavily those who used).  He got to the 500 career home run plateau (521) and had a .419 career OBP with 1704 career RBI.  He was a 2-time MVP and made five All-Star games.  The numbers are there.

Factors against him: Never played in a World Series, and voters sometimes do not like to vote in big offensive numbers for a player who accumulated them as a DH (his last season over 90 games at 1B he was 29 years old).

Thomas was very popular with the media, his peers, and fans.  He may be close to the cut off because of the deep ballot and because of the first-time voter bias.  I think he gets in around 80% of the ballot.

6) Jeff Bagwell - He was an offensive machine in the mid-1990's, career numbers reflect that (.297, 449, 1529 RBI). Only Palmeiro, Bonds, Sosa, Thomas, and McGriff on the ballot have more RBI. More walks than anyone else on the ballot besides Thomas and Bonds (fear factor and eye), .409 OBP. He also stole 200 bases and was an above average 1B (Gold Glove in the closet). No hard evidence of PED's, he was a weight-lifting machine and didn't see anything late in his career that would lead one to believe he was juicing.

Factors against him: Perceived use of PEDs, playing in a small market, lack of postseason success.


7) Larry Walker - He was another 5-tool player, finished his career with a .313 batting average, higher than anyone else on the ballot.  Let me repeat that, highest batting average of anybody on the ballot. Also stole 200 bases, also hit 383 home runs. He has so many gold gloves he probably had to build an extra wing on his trophy case. Like Bagwell, he won one MVP. He's also a member of the .400 OBP club (he, Bagwell, Thomas, Bonds, and Edgar Martinez the only four on the ballot).

Factors against him: Perceived higher numbers due to Colorado, soft-spoken personality, injury-prone (only 4 seasons of 140+ games).

He only received 22% of the vote last year (regressing), that needs to trend up significantly for people to start noticing.  I don't think it will.

8) Edgar Martinez - He's of the mold of the previous two players. Hit for high average, good (but not awe inspiring) power, gets on base all the time. While I am not a fan of the DH, if MLB has it as a position, you can't hold that against him. With the previous two, defense pushes their case, for Edgar it can't but he still deserves it. Career .312 hitter, .418 OBP, slugged .515 (more than McGriff). He's also a member of the 300 HR club for a guy who didn't try to lift the ball as much as others.

Factors against him: Primarily a DH, played in small market, lack of speed.

He was voted for the affirmative on 36% of last years ballots flat year-over-year.  He needs to get closer to 50% to continue the momentum, now in his fifth year and not moving much.

9) Lee Smith - The Hall of Fame is still figuring out how to accommodate closers, it's my opinion that they are indeed a key element to the game and the best of the best should be included. With Smith, it's not about the numbers (ERA, W-L) as much as the raw pile of saves he accumulated. No matter where he played, he never seemed phase by a momentary lapse of success. Fourteen seasons in a row of 25 or more saves shows a level of consistency matched by few. If there are going to be closers in the HoF, Smith should be there.

Received 47.8% of the vote last year, is trending flat or down in his 12th year.  Half the people isn't enough!

10) Jeff Kent - Quietly one of the top offensive second basemen of all time.  His line across the major stats is .290, 377, and 1518.  He has an MVP in his closet, and three other Top 10 finishes.  Add to that six All-Star appearances.  His numbers dwarf Ryne Sandberg and Roberto Alomar, there's no reason he shouldn't get the vote eventually.

Factors against him: Very average on defense, played in a power era in which his home run numbers aren't considered extraordinary. He was also very cold with the media, just didn't like that part of his job.

I think he will probably follow the Bagwell trajectory, getting near 50% the first few years as his legacy is more discussed and people realize how strong his offensive production really was.

11) Tim Raines - Rock falls just short on the numbers. Besides SB's (of which he is more than deserving), his average and power are lackluster, no Gold Gloves. He did accumulate the most hits of anyone on the ballot (besides Palmeiro, Bonds, and Biggio) playing to the age of 40.

Factors against him: Played in Montreal during his prime, average defense, never was higher than 5th in an MVP vote, not a feared hitter.

At 52.2% now in his seventh year, he made a decent 4% leap last year, but can the momentum continue?

12) Mike Mussina - Without 300 wins, I have trouble putting Moose on my first ballot.  No Cy Young Awards, a one-time 20 game winner, five All-Star games.  Career ERA is 3.68, again, higher than his peers discussed above.  I might come around, but first ballot is way too soon.

Factors against him: Doesn't have 300 wins, wasn't THAT dominant (ERA mediocre), played on winning teams but never won a World Series.

13) Jack Morris - He was a gamer who was consistent, just not consistently great. A three-time 20-game winner, but 3.90 ERA shows me he outlasted a lot of opponents for those wins instead of dominating them. Never had an ERA below 3.05 in a single season. I probably hold starting pitchers to the highest standard when considering Hall of Fame, if you start to take 250 game winners and folks with ERA's near 4.00, you start to let in a lot of slightly better than average pitchers.

Factors against him: ERA, lack of dominating presence, allowed a lot of baserunners (WHIP).

14) Fred McGriff - You can't ignore the near 500 home runs, but he hung on a while to get so close and wasn't elite enough in his prime to warrant the Hall. Average defense, below average speed, not an outstanding OBP. He also never broke 110 RBI in a season.

Factors against him: Low average, lack of dominating seasons, lack of speed.

At only 20.7% last year, he had a drop from the year before. Numbers are inferior when compared to the seven hitters I would vote in, I doubt many voters put 8 hitters on their ballot given the talent.  He may fall off the ballot.

Steroid specter (stats more than deserving, even before they might have juiced, but would not get my vote): Barry Bonds, Sammy Sosa, Roger Clemens, Rafael Palmeiro, and Mark McGwire
Vets with short stats: Alan Trammell, Don Mattingly, Curt Schilling
Newcomers that might stay on the ballot: Moises Alou, Luis Gonzalez

Much discussion of the 10 vote limit, those who want to vote in PED users (for legit reasons, they're not banned from the game, baseball didn't do it's job, I get it) will certainly hurt those guys who are close (Edgar, Biggio, Bagwell, McGriff, Kent) and might be enough to keep them out.  But with a 15 year window, the bubble will get through and if you're deserving, you will eventually get the call.
Posted by longhorndave at 8:37 PM