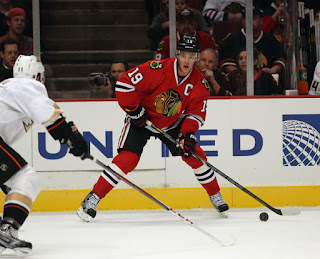 As the Stanley Cup semifinals winded down, the Chicago Blackhawks seemed to will their way past the Anaheim Ducks.  Captain Jonathan Toews seemed to be in the middle of the action at all points.  Coming into the week tied 2-2 in the series, the Toews scored two late goes in Game 5 miraculously top send the game to overtime (but an eventual 5-4 loss).  In Games 6 and 7, Toews continued to be in the middle of the action, skating to a +2 in a Game 6 victory, and scoring two goals himself in Game 7 on the road in Anaheim.  When the going gets the toughest, the Blackhawks look to their captain, our Longhorndave Sportsman of the Week!

Posted by longhorndave at 1:14 PM