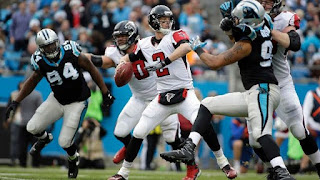 A number of key NFL contests went down over Christmas weekend, but it was a stealthy MVP candidate that delivered his team to a potential first round bye.  Matt Ryan had a very crisp and clean performance in dismantling the favored Carolina Panthers in Charlotte to put the final dagger in their playoff hopes, while positioning the Falcons (with a surprising Seahawks loss) for they key bye.  Overall, Ryan was 27/33 for 277 yards and 3 TD.  His 27 throws targeted 10 different receivers which kept the Panthers defense off balance.  He's the only QB in the NFL to rate in the top 3 of passing yards, passing TD, and QB rating.  His 7 INT are among the lowest for regular QB as well.  The Falcons are a dark horse team to unseat the seemingly invincible Dallas Cowboys and if they do, it will be because Matt Ryan slays them.  He is our Sportsman of the Week!