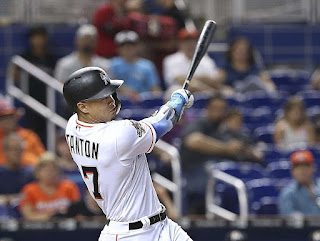 The Major League Baseball pennant race is heating up, as is the chase for individual glory.  It's individual glory that we focus on this week.  The best power hitter in baseball, Giancarlo Stanton, is on a tear and could approach 60 HR by seasons end.  He padded his stats this week, going 8 for 20, with 3 HR and an astounding 7 bases on balls.  In all six games this week, he reached base at least twice resulting in a .556 on base percentage, and .700 slugging percentage.  He started the week finishing off a six game home run streak, which ended Wednesday, but was picked back up later in the week with a home run.  If he gets to 60 or 61, many may regard him as the legitimate single season home run champion, as records posted in the 1990s and 2000s are widely regarded as Performance Enhancing Drug induced.  Stanton is great for baseball, and the Longhorndave Sportsman of the Week!

Editors note: this is Stanton's second Sportsman of the Week, his first reads eerily similar for almost exactly three years ago to the day and similar stats!
Posted by longhorndave at 6:35 PM