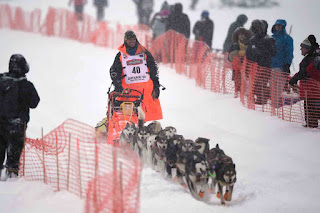 In a dark time in modern sports history, a shining beacon from the north gives inspiration.  Thomas Waerner won one of the most iconic sports events on the planet.  The Iditarod.  Nearly 1000 miles of mushing across the beautiful yet rugged terrain northern land of Alaska.  Done in 09:10:37:47 (days, hours, minutes, seconds).  For reference, the three weeks of the Tour de France winner finishes in between 3 and 4 days (albeit not elapsed time).  That's a lot of time in the saddle and on the trail.  The Norwegian Waerner is only the fourth non-American to win the Iditarod, and it was surprising in only his second try.  He gave all credit to K2 and Bark, his two lead dogs, giving all of his ten dogs a snack after the race.  Waerner is the second Iditarod champion to be named Sportsman of the Week and should not be the last!

Credit to The Guardian for much of the information in this article
Posted by longhorndave at 9:32 PM