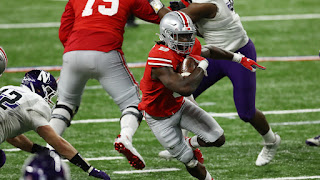 The college football season ended with a flourish, as feverish debates over teams' playoff worthiness and conference championship pedigree.  Ohio State was on the playoff bubble, but thanks to our Sportsman of the Week, busted through to earn a berth and even move up a seed.  Senior running back Trey Sermon delivered his career best performance in perhaps the biggest moment in leading the Buckeyes to their 4th  straight conference championship with a 22-10 victory over the Northwestern Wildcats.  And I do mean career performance.  Sermon rushed for a Buckeye and Big 10 title game record 331 yards on a workman like 29 carries and both Buckeye TDs to get the job done.  One might wonder why Ohio State tried to throw the ball at all as Heisman candidate Justin Fields faltered with a sore thumb and ineffectiveness.  Sermon made sure that the Buckeye congregation is moving on and looks to deliver them their first National Championship in 6 years.
Posted by longhorndave at 4:19 PM