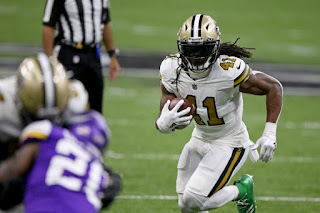 Perhaps the best all around offensive weapon in the NFL was unleashed upon his foe and showed no mercy.  New Orleans Saints uber-back Alvin Kamara kept gashing the Minnesota Vikings for huge chunks of yards, many times the only thing that stopped him was the end of the field when there were no more yards to gain.  Many times is six times.  Six touchdowns on 22 carries tied an NFL record that was over 90 years old.  Kamara rushed for 155 yards total or 7 Yards Per Carry without any gains over 40 yards.  The Saints clinched the NFC South with the victory with an eye on the number one seed and a potential bye.  Either way they are positioned for two home playoff games with a win on Sunday.  Kamara complementing Drew Brees and the potent passing game my put the Saints in the Super Bowl for the first time in over 10 years.  He is the Longhorndave Sportsman of the Week!
Posted by longhorndave at 12:01 PM