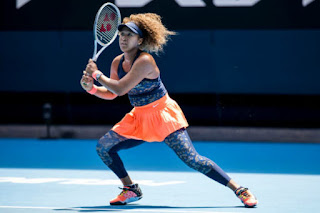 There's a changing of the guard on women's tennis, no doubt about it.  And it played out in the first Grand Slam tournament in 2021.  Japan's Naomi Osaka knocked off American legend Serena Williams in the Australian Open semifinals which had all the making of a passing of the torch.  Serena had little to defend against the younger, more athletic Osaka.  Neither did fellow American Jennifer Brady who put together a great tournament to even get to the finals, but could muster no more than the 7 games Serena did over 2 sets.  Only Garbine Muguruza could win a set against Osaka and along with the two Americans, the only ones to win 4 games in a set.  The 23 year old Osaka looks all the part of a humble tennis superstar, and this is her second Sportswoman of the Week!
Posted by longhorndave at 8:49 PM