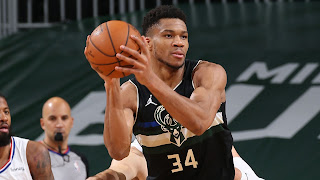 The NBA is hitting its Spring stride and a familiar name is positioning his team for a potential deep NBA Playoff run and potential first title in 50 years (and you think your favorite team hasn't won in a while).  Giannis Antetokounmpo of the Milwaukee Bucks has his team at the third seed and feared hoping to at least win the Eastern Conference since 1974.  The two-time reigning NBA MVP lit up opponents this week with 3 games of brilliance.  36-38 points in each game (37 PPG average), 13-15 made FG, throw in average 11 rebounds and 6 assists and not a bad week.  Oh, and 3 wins.  He's also the reigning defensive player of the year so complete two way threat.  Will the Bucks finally break through?  Will Antetokounmpo  win a third MVP?  To be determined, but he is our Sportsman of the Week!
Posted by longhorndave at 9:08 PM