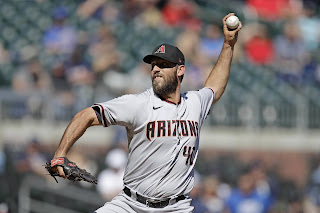 Three weeks in a row a no hitter in Major League Baseball?  According to MLB, no.  According to our Blog?  Yesssssss!  Arizona Diamondbacks lefty Madison Bumgarner navigated start to finish against the defending National League East champion Atlanta Braves and did not allow a batted ball in play that resulted in a runner that was not an error or fielders choice.  In fact, there was just one error in the game.  Bumgarner is an unlikely source for such a feat.  While in his prime he was one of the most feared pitchers in the League, including a 2014 World Series MVP (for which he won a Sportsman of the Week) to his credit, he has not been as effective.  He hasn't had a complete game since 2017.  A shutout since 2016.  What a performance and what a Sportsman of the Week!
Posted by longhorndave at 9:18 PM