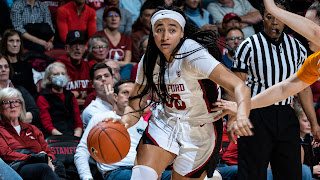 Sports fans across the United States were deprived of March Madness in 2020.  The reward in 2021 is that much sweeter.  After recognizing as a Sportsman of the Week a player on the men's side last week, it was the Women's Final Four that was the story of the weekend.  Enter an all Pac 12 final, and enter our Sportswoman of the Week from the National Champion Stanford Cardinal.  Haley Jones of the Cardinal led a 4 guard attack that couldn't be slowed down in two, single point Final Four victories.  Jones chipped in 24 points in the semifinal against South Carolina Gamecocks, then another 17 against fellow Pac 12 rival Arizona to end the Final Four averaging over 20 points a game.  The Stanford Cardinal were champions for the first time in 29 years and Jones is the deserving Sportswoman of the Week!
Posted by longhorndave at 8:04 PM