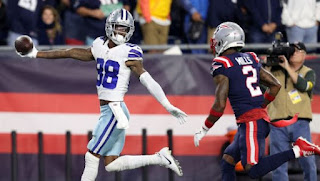 The Dallas Cowboys may FINALLY be for real and it's because they built up offensive weapons all over the place and their defense isn't bad.  This week, in an extraordinarily entertaining game, the Cowboys beat the longstanding dynasty (albeit waning) New England Patriots in overtime.  While QB Dak Prescott torched the Patriots defense time and time again, it was receiver CeeDee Lamb that hauled in most of them.  Lamb hauled in 9 receptions (career high) for 149 yards (career high) and 2 TD (tied career high) including the overtime winner after the Patriots won the toss and had to punt.  Targeted just 11 times, Lamb got just about everything thrown his way and for the first time since Barry Switzer stalked the sidelines, the Cowboys look like serious Super Bowl Contenders.  Will America's team finally win a title for the first time in 25 years?  They will if Lamb keeps it up.  He is the Longhorndave Sportsman of the Week!
Posted by longhorndave at 10:24 PM