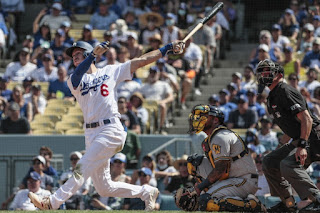 The last week of the Major League Baseball Season produced drama as the last few playoff spots were grabbed in the final weekend.  One of the most contested races were between the two best teams in baseball (in win total), the San Francisco Giants and Los Angeles Dodgers.  The preseason World Series favorite Dodgers trucked along the regular season, but always found themselves looking up at the Giants in the standings.  Going into the final week, they stayed that way.  Despite the efforts of our Sportsman of the Week.  Trea Turner, a mid-season acquisition by the cash and prospect rich Dodgers, sealed a National League batting title by torching opponents all week.  Turner went 11-24, 8 runs, 11 RBI as the Dodgers won all games and positioned themselves to nip the Giants at the finish line.  It was not to be, as the Giants held out.  But the Dodgers earned a Wild Card berth and, if they win, will face the Giants with a chance to finally get the upper hand and advance in the World Series.  Turner will be a big factor, and is the Longhorndave Sportsman of the Week!
Posted by longhorndave at 9:11 PM