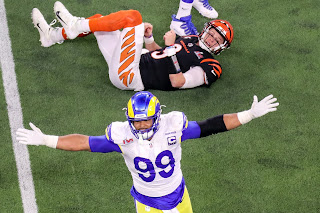 Wrapping up one of the most exciting playoffs in NFL history was another game that went down to the last two minutes.  This time, the Super Bowl.  Specifically Super Bowl LVI.  As someone who grew up in the 80s and 90s it was rare that Super Bowls lived up to the hype (mostly thanks to the 49ers or Cowboys blowing teams out).  But the last few years have been down to the wire.  This time, the Los Angeles Rams won their first Super Bowl (at least as a West Coast team) and delivered the punching bag Cincinnati Bengals a heartbreaking third loss in three tries.  The Rams wrapped up their victory with huge plays by certainly the best player on the team, if not the best defensive lineman in history.  Defensive tackle Aaron Donald punctuated one of the best runs in defensive history (really only Lawrence Taylor and J.J. Watt compare) by making critical plays in the clutch.  With the Rams clinging to a 3-point lead, Donald both stepped up on third down and 1 yard for a tackle, then forced a desperation pass by Joe Burrow on fourth down by completely disrupting the play like only he can do.  His 2 sacks and 2 tackles for loss don't fully represent his disruption of the game, drawing continuous attention from the line leading to 7 sacks total by the Rams.  And a World Championship.  Our Sportsman of the Week etched his bust in Canton.
Posted by longhorndave at 10:00 PM