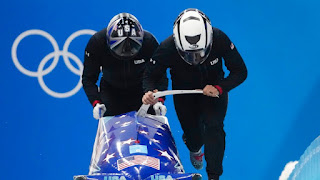 As the 2022 Winter Olympics Games wind down, history was made in American bobsledding and medal winning.  Elana Meyers Taylor cemented herself among the American Winter Olympics greats in securing her record breaking fifth medal in women's bobsledding, spread over four Olympiads.  The four-time World Champion secured silver in the monobob (behind country-mate Kaillie Humphries), and bronze in the two-woman sleigh (with Humphries) to cap off her legendary career.  Her effort in both achievement in the sport and representing the United States earned her the nod to carry the American Flag in the closing ceremony.    The 37-year-old ends her Olympic career setting the standard for generations to come, and her impact will be felt far beyond these two weeks.  Meyers Taylor is a worthy Longhorndave Sportswoman of the Week!
Posted by longhorndave at 6:39 PM