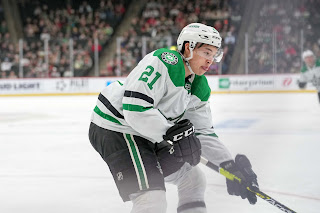 In the times between NFL Football, March Madness, and MLB Baseball (if it ever starts again) we turn to one of the great North American winter sports, hockey.  The National Hockey League is entering the home stretch for the playoffs and the Dallas Stars are in the mix for one of the last playoff spots.  After this week, they are in.  Thanks to Jason Robertson.  Robertson led Dallas two three straight victories as a goal scoring machine, tallying 7 goals for the week.  More impressively, two hat tricks in a 48-hour span as he scored 3 on Friday against Winnipeg, including an overtime winner, then followed on Sunday with 3 more against Minnesota for two big road wins for the Stars.  Although in the Top 10 in the NHL in goals scored, the 7 goals scored this week in March were more than any full month in the previous months of the season.  Robertson is getting it done when his team needs it and is the Longhorndave Sportsman of the Week!
Posted by longhorndave at 6:31 PM